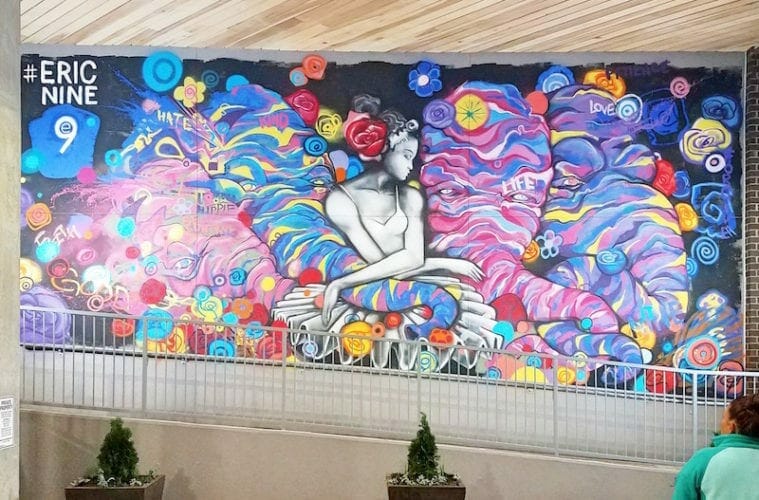 One of EricNine’s latest murals is this one, found along the garage wall of Edge on the BeltLine, a new apartment complex next to the Atlanta BeltLine's East Side Trail. (Photo by streetartmap.org)

Brooklyn-born artist EricNine, who’s called Atlanta home since 2005, has witnessed many of the city’s  transformations and its artistic growth. His first work was inspired by a network of friends that included musicians, chefs and writers. This led to his first series, titled Imma Beast. He photographed many of those friends and used Photoshop to create alter-ego monsters to fit their personalities.

Today EricNine does mostly conceptual painting on canvas and has a thriving public-art practice. He routinely exhibits his work at his studio in Notch8 Gallery on Blashfield Avenue SE and at multiple pop-up-style events he produces.

EricNine (full name: Eric Nine Lopez) was drawn to the arts as a child. He attended a fine-arts magnet school and learned shoulder to shoulder with a diverse group of artists and performers. He’d often spend his free time inside the high school theater watching rehearsals and sketching the actors onstage. 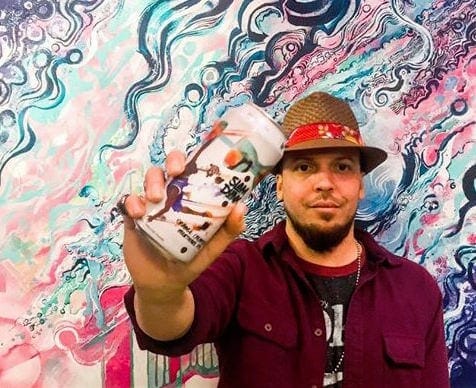 “Humans are the most complex creatures on the planet,” muralist EricNine says, “and I focus on telling my story through this approach.”

After finishing school, he worked as a graphic designer, focusing primarily on print, logos and branding. He knew that to stand out in a city like Atlanta, he’d need to do something different. “Even in the more upscale art shows, it felt as though everyone was doing the same thing,” he says.

He visited Los Angeles, New York and Chicago and was inspired by the diverse ways in which art was shown in those cities. Because of his travels and his performing-arts-school experiences, he brings a performative element to his work. When he unveiled a mural at Edge On the BeltLine apartments this winter, he commissioned Atlanta Ballet dancers to perform alongside the street art. You can see the piece along the garage wall at Edge, on DeKalb Avenue in the Old Fourth Ward. 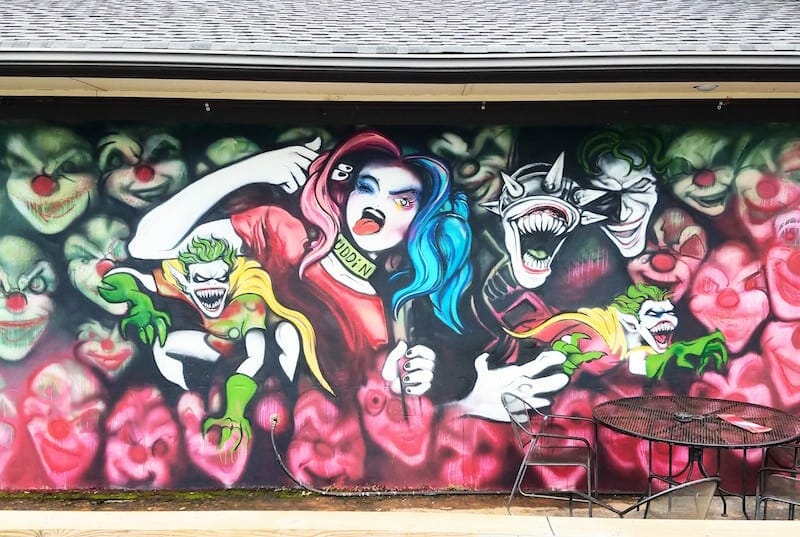 EricNine painted his first mural, “Harley and the Joker,” at My Parents’ Basement, a comic-book bar in Avondale Estates. He has a longstanding relationship with the owners and often uses this wall to conceptualize. (Photo by streetartmap.org)

EricNine, who doesn’t share his age, painted his first mural in 2015, at My Parents’ Basement, a comic-book bar in Avondale Estates. Since then he’s participated in such public-art events as Cabbagetown’s Forward Warrior, the High Museum of Art’s Monster Drawing Rally and Beats N Brushes at Doo Gallery. He also has a mural near Donald Lee Hollowell Parkway and Paines Avenue in the Bankhead neighborhood.

EricNine’s street art often is a response to the emotional environment around him. Ballet dancers remain a constant muse. Ballerinas and elephants painted in vibrant colors are recurring figures. The ballerina represents his personal relationships, the elephant the complexities in life. “Humans are the most complex creatures on the planet,” he says, “and I focus on telling my story through this approach. My focus is on the content and trying to provoke emotion through my paintings.”

It’s clear he’s made a place for himself in the city’s arts community. “Atlanta is one of the very few cities that allows artists to be original,” he says. “I would encourage any artist with motivation and persistence behind their artwork to not rely on galleries or organizations but to create your own identity and movement.” 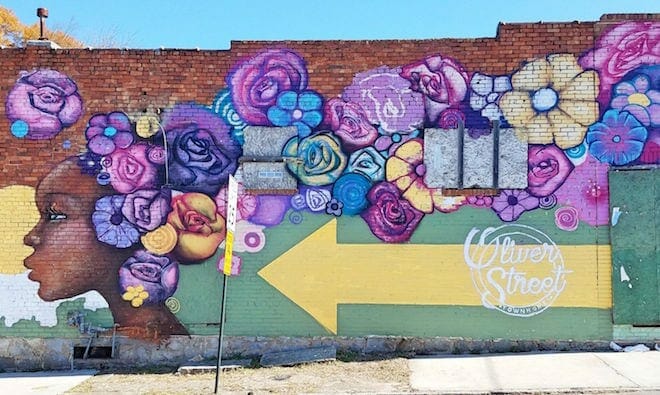 Another EricNine mural: This one, in the Bankhead neighborhood, is part of a series painted to bring life to an abandoned building. You can see it near Donald Lee Hollowell Parkway and Paines Avenue. (Photo by streetartmap.org)

ArtsATL’s street art column is done in collaboration with Art Rudick and his Atlanta Street Art Map. We’d love to hear your thoughts and ideas about the metro’s mural scene, too. See something you like? Have an artist to recommend? Have an opinion? Please let us know. Email kathy@artsatl.org.

COMING FEBRUARY 13: A look at street art by Angie Jerez.