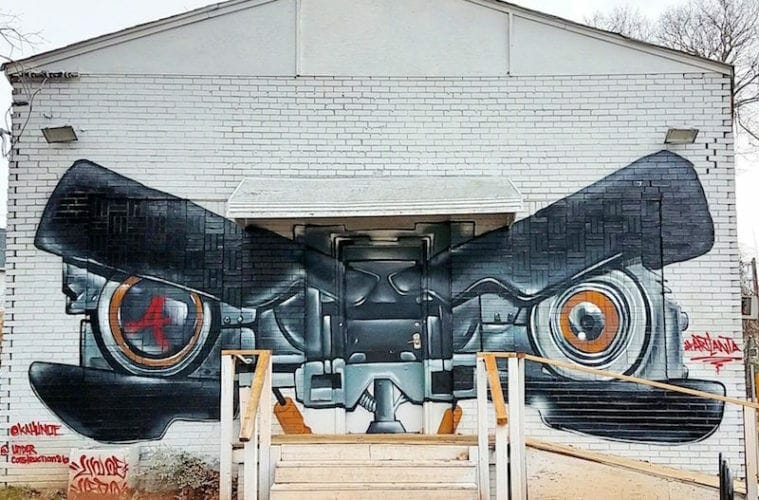 Here's looking at you: Notice the "A" for Atlanta in one of the headlights (eyeballs?) in this Reynoldstown robot mural by Unoe and Underconstruction86. You'll find it at Sopo Bicycle Cooperative, 1118 Memorial Drive S.E.

You’ll find Reynoldstown in southeast Atlanta, bumping up against downtown and Cabbagetown. You’ll also find that it’s undergoing a mass transformation. Memorial Drive, where at least four condo and townhome projects have opened or will soon arrive, has the historic neighborhood — which dates to the 1860s — facing a tidal wave of gentrification.

Ah, but the area is known for holding tight to its history, including its appetite for murals that brighten its alleyways, corners and walls. The Memorial Drive / Moreland Avenue area has become a particular hot spot for street artists. (Take a visual tour via the Atlanta Street Art Map.) Today’s spotlighted murals, the work of 10 artists (listed alphabetically), are all within a one-minute walk of the corner at Memorial and Moreland. You’ll find additional murals there, too, from such national and international artists as Daniel Bombardier, DeGrupo, Taji and the Miami collective The Mad Clout.

Francisco M Diaz, better known as “pastelfd,” lives in Buenos Aires, Argentina, but in 2013 visited Atlanta for that year’s Living Walls Conference. The Flat Shoals mural, his only one in Atlanta, displays a shadowed forest with red geometric shapes as the focal point. Nature, a theme in much of his work, is used to begin a dialogue about humans and their surroundings. 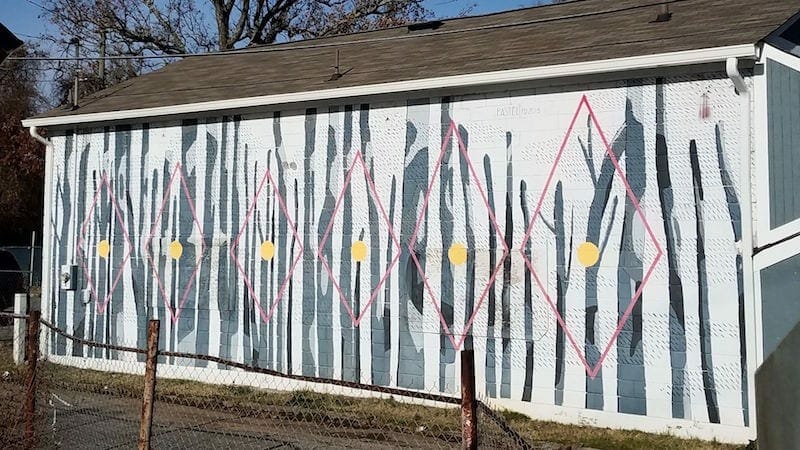 Nature is a common element in the work of Francisco M Diaz, as seen in this piece on Flat Shoals Avenue. (All photos by streetartmap.org)

Franco “JAZ” Fasoli, also from Buenos Aires, works in the traditions and styles of fine art. He, too, came Stateside for the Living Walls Conference in 2013, and painted a signature piece titled Around the Fire. His work often features Latin American nations in intricate detail. 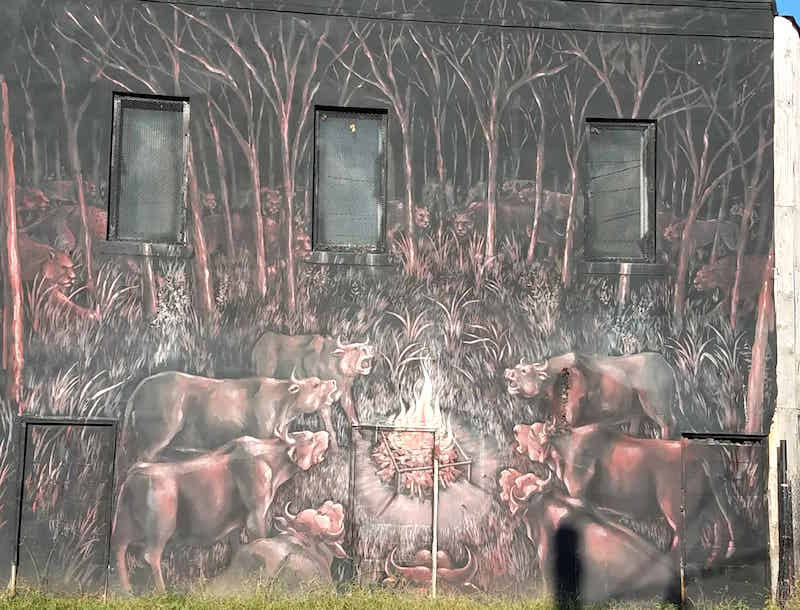 Nature calls in this piece by the artist who goes by JAZ. It’s at 230 Flat Shoals Ave. S.E.

Yoyo Ferro — whose Keith Haring-esque murals are among our favorites — was born in Piracicaba, an agricultural city in the Brazilian state of São Paulo. He moved to Atlanta in 2010 and began making art — specifically origami — in 2012. “The theme of my work is to tell a story of characters going through life’s struggles and their attempt to reach their goals,” he told ArtsATL in a September 2019 column. His work is characterized by bright colors, contour lines, faceless figures and polka dots. One of his most recognizable murals can be found on the Atlanta Eye Care building at Underground Atlanta. 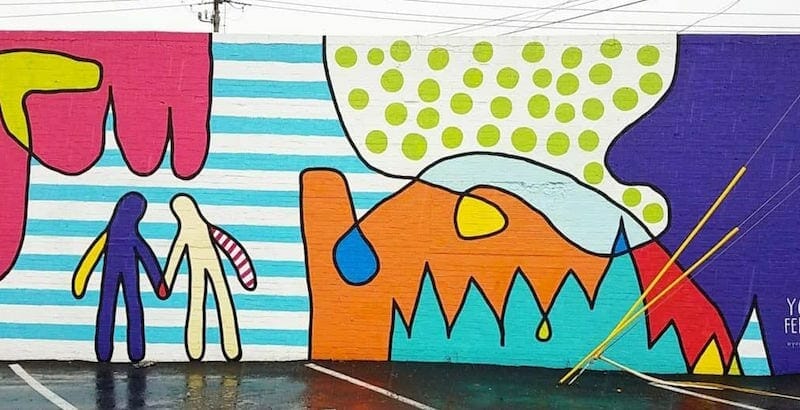 Matt Letrs (who goes by Letsgopaint) and David Fratu (also known as ILL.DES) have collaborated on several Atlanta murals. Fratu’s style emphasizes the “balance between chaos and order.” His graffiti works contain geometric shapes and vibrant colors in an attempt to leave viewers in a trance-like state. You may recognize his work from 2019’s Forward Warrior, the annual street art event in Cabbagetown. Letrs has been making art since 1995. Like Fratu, he uses geometric shapes, along with bright colors and sharp edges. With many similarities and enough differences, the two make a dynamic duo. Letrs has another mural at 230 Flat Shoals Ave. S.E., a stone’s throw away from this Moreland Avenue piece. 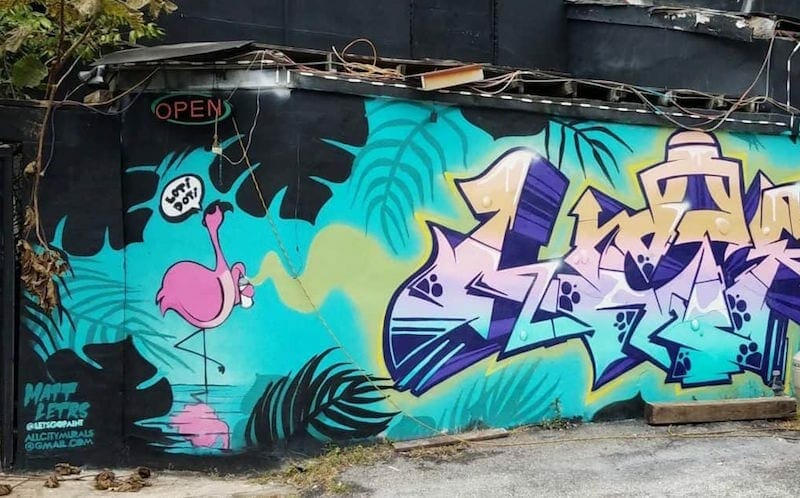 Matt Letrs and David Fratu often emphasize color and geometric shapes in their collaborations, like this one at 205 Moreland Ave. S.E.

The artist Amir Alighanbari, better known as Mr. Totem, has been working commercially and for himself for more than 30 years. His murals often contain pastel colors and soft lines. One of his most recognizable is Where the Wild Things Are, behind the Aisle 5 music venue in Little Five Points. He’s largely been influenced by The RAMM:ELL:ZEE (1960–2010), a pioneering visual and hip-hop artist who began working in his native New York in the late 1970s.

Chris Veal’s murals mimic comic books, with pop-art tendencies and witty comments that poke fun at daily life in Atlanta. The multifaceted Veal uses many mediums to create his art, but his favorite is spray paint. He studied graphic design at American InterContinental University and met Adam Podber in 2017. The two have collaborated on murals, as well as their own work, ever since. Podber studied product design at SCAD and began working as an artist full time in 2016. Read more about Veal, the satirist, in this street art column from April 2019.

Kahunoe Unoe (Unoe) and Vedo (Underconstruction86) have painted together for more than six years, completing more than 600 murals. Their character Johnny 5 is an experimental military robot from the 1988 comic sci-fi film Short Circuit. The piece, on the Sopo Bicycle Cooperative, was painted in just four hours. In the rain.

ArtsATL’s street art column is done in collaboration with Art Rudick and his Atlanta Street Art Map. We’d love to hear your thoughts and ideas about the metro’s mural scene. See something you like? Have an opinion? Please email kathy@artsatl.org.