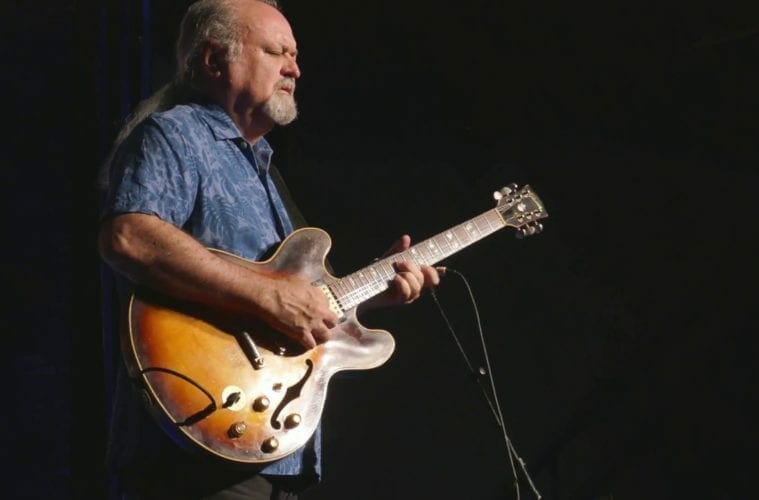 Tinsley Ellis plays a sold-out show at City Winery Friday to celebrate the release of his 18th solo album.

Tinsley Ellis is such a fixture on Atlanta’s music scene that it’s almost easy to take him for granted. He is the most prominent blues musician to emerge from the city in decades, and has spent most of his 40-plus year career recording for Alligator Records, the pre-eminent blues label. His last album, Winning Hand, entered the Billboard blues chart at No. 1 when it was released in 2018.

Ellis’ new record, Ice Cream in Hell, comes out Friday, and he launches a long national tour with a sold-out show at City Winery with Mudcat opening, and another show Saturday at The Foundry in Athens with Caroline Aiken opening. The album is the 18th of Ellis’ career, and a more blues-focused disc that features his new Gibson 345 Freddie King model semi-hollowbody guitar. Ellis co-produced the album with Kevin McKendree (Delbert McClinton, John Hiatt) at McKendree’s studio outside Nashville. In addition to McKendree on keyboards and guitar, the studio band features Steve Mackie on bass and Lynn Williams on drums.

When ArtsATL sat down with Ellis on Monday afternoon, he had just returned from the six-day Blues Cruise that also featured such blues figures as John Hammond, the Fabulous Thunderbirds, Taj Mahal and Kenny Wayne Shepherd. And he’d just learned that blues legend John Mayall has recorded one of his songs. The conversation ranged from his new album to his reflections on blues greats and the future of genre. ArtsATL: I understand the recording sessions for the album actually took place a while back.

Tinsley Ellis: This album feels like a very long pregnancy. It’s been in the can for over a year. That’s a long time, but we know January is the best time to put an album out for touring. We recorded it in two days at Kevin McKendree’s studio behind his house in Tennessee. I brought the hard drive back to Atlanta, listened, and told him which takes I thought were better. There’s no common theme to the album, really, other than guitar style. There’s happy songs, sad songs, dancing songs, crying songs, laughing songs, listening songs.

ArtsATL: The song that really stands out is the slow blues “Your Love’s Like Heroin.”

Tinsley Ellis: That song, from the press we’re getting and airplay so far, is going to be the featured track. It just happened at the end of session, lights down low and all the other stuff in the can. We were relaxed, and it had that relaxed sound. It was cut totally live, I don’t think there’s any overdubs on that song at all. There’s a beauty in that.

ArtsATL: You have some great minor key slow blues in your catalog.

Ellis: When you do the slow minor key blues, that’s sort of what separates the men from the boys right there. Usually you have to grow into it, get seasoned. But Duane Allman had it at a young age, and Stevie Ray Vaughn with “Tin Pan Alley.”

I remember when Stevie Ray hit and they sent him out with Huey Lewis and the News. He only got 40 minutes onstage. He told me it was a drag because if he did “Tin Pan Alley,” it took up a third of the show, and he had to keep his set upbeat and rocking. That’s kind of what fame does for a roots performer: We like you to be famous, but don’t do what you’re famous for because it takes too long and is too emotional. What will keep you famous is not what will get you famous. Bluesman Tinsley Ellis says that performing onstage is part of his lifeblood.

I’m not sure I’m going to do some of these long, slow pieces in concert because I’ve got so many of them. I looked on my digital report on what people are streaming. Nine out of 10 songs by me on the report are slow songs, and most of those minor key. You really don’t want a career of nothing but slow minor key blues songs because then you become the King of Bummer Rock (laughs).

ArtsATL: John Mayall, one of the major figures of British blues, just recorded one of your songs, “A Quitter Never Wins.” It must be exciting that one of your heroes has done one of your tunes.

Ellis: That’s an artistic high for me. That feels good, that feels validating. Robby Kreiger of The Doors played the lead guitar on it. I’m trying to figure out what that will sound like.

ArtsATL: You had a heavy touring schedule last year. What’s on tap for 2020 with the new album? Tinsley Ellis recorded most of the album with his new Gibson reissue of the 1960s ES-345, the Freddie King model. “It’s the nicest guitar I’ve ever owned,” he says.

Ellis: We’re doing 62 concerts in three months starting this Friday, everywhere in North America. That’s just what I do because there are no rock radio stations that play this kind of music. Eric Clapton or Bonnie Raitt or even The Rolling Stones come out with an album, who’s going to play it? So we have to go from town to town like a politician would do and shake hands, meet people and get fans one at a time. And they seem to last longer that way.

I thought B.B. King would live forever. He obviously didn’t. I also knew that as soon as he retired, that would be the end. When a blues player retires, that’s the end. Not only the end of hearing about them, but possibly end of his life. When you’d see Sunnyland Slim offstage, you’d almost want to call 911. Then you’d see him onstage and he’d be like a teenager. I saw that so many times. It’s important to stay onstage and keep doing it.

ArtsATL: Do you appreciate that you’re approaching “elder statesman” status?

I’ve had a career of attrition, that’s just the way it works out. When I first started, this guy had a nightclub in Florida, and I wanted everything right then and there. And he said, “It takes a lifetime to build a career playing the blues.” One day I’m opening for John Lee Hooker in Warner Robins playing for eight people, the next year we opened for John Lee Hooker at Center Stage and it sold out.

Unless you make it as a Johnny Lang and become famous when you’re a teenager, you have to wait until you’re a John Lee Hooker to make it in blues music. You have those two opportunities. Either you’re the fresh new face on the scene or else you’re the elder statesman. I’m not an elder statesman yet, I’m more of a bleeding deacon (laughs).

I don’t want the elders to pass away, but they do. There was lots of good music being made but when I was first getting into blues music, I’d go see Howlin’ Wolf and Muddy Waters and B.B. King and Albert King. We thought they’d be around forever, and they’re gone now. All of them.

ArtsATL: You’ve given Stevie Ray Vaughn a lot of credit for revitalizing the blues scene back in the 1980s when you were first coming up. Is blues music at the point where it needs another Stevie Ray?

Ellis: When Stevie Ray came out in 1983, he swung the door wide open and we all walked in right behind him — Duke Robillard, Ronnie Earl, me, Jimmie Vaughn, Robert Cray. We haven’t had anybody like that since then. We’ve had some blues rockers, but no one with the talent and stature and panache of Stevie. The tools of a bluesman: the guitars Ellis uses onstage, played through a Fender Deluxe Reverb amplifier.

Blues is in good hands, but it seems like there were more hands on deck back then — Muddy Waters, Howlin’ Wolf, the list goes on. That was a special time. Nowadays, if you get one or two pure blues artists, then you’re lucky. Back then, there were so many. Now, there’s so many blues musicians and so few bluesmen.

We could use another Stevie Ray Vaughn. I think Sean Costello (the late Atlanta blues guitarist) could have been one, but the flame burned out way too young. It has to be somebody that’s young because pop culture is driven by youth and image, which means I’m screwed (laughs). People like Janis Joplin and Stevie Ray Vaughn dressed offstage just like they did onstage. They had it. They had star power. We could use someone with star power to push this music into pop culture. I haven’t done anything really wild, and that seems to be the fodder of fame these days.

ArtsATL: It’s not too late.

Ellis: I know. But I’m not willing to bust out of rehab and run somebody over with a car (laughs). That’s how you get famous now. I miss the drama of these blues people. I often think the Howlin’ Wolfs and Muddy Waters and Little Waters, if they were around today they’d be rappers. Muddy Waters would probably like the Snoop Dogg and Howlin’ Wolf would be Notorious B.I.G. and Little Walter would be like a Bobby Brown, colorful lifestyle and always getting into trouble.

We don’t really have anybody in the genre like that anymore. I’m fascinated with rappers. That’s music of the streets, just like the blues was back then. Whoever can come up with a way to mix the two things, blues soloing and melody and the voice of the blues, with what’s going on with the music of streets, that person will be the next B.B. King. That’s not me. I’m not flamboyant enough. I’m Mister Flannel Shirt.