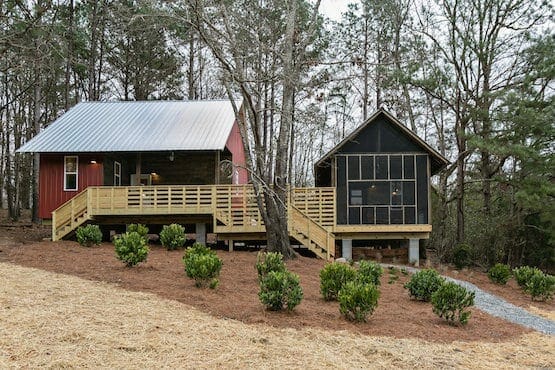 The two cottages sit on a hill on Serenbe’s Art Farm. (Photos by J. Ashley Photography)

Editor’s Note: In 2016, ArtsATL co-founder Catherine Fox wrote about the partnership between Serenbe and Auburn University’s Rural Studio program to provide housing for Serenbe’s artist residency program. The program gave Auburn a way to test its cutting-edge designs and gave Serenbe affordable cottages for the artists visiting there. It remains one of the most popular stories in our history.

Rural Studio is committed to improving the lives of the rural poor. Since its inception in 1993, this architecture program at Auburn University has served the community of Hale County, Alabama, with student-designed and -built homes and civic buildings.

Rural Studio’s first project outside Hale County, dwellings based on two of its house designs, has just been completed at Serenbe, the high-end, new-urbanist-pastoral community in Chattahoochee Hills, south of Atlanta.

Though initially jarring — this partnership is not as odd as it seems.

Credit artist Tom Swanston, who has long been involved with Serenbe and its artist residency program, for making the connection, both literally and figuratively. Swanston has followed and admired Rural Studio through the years. “Affordable housing has been a longstanding issue for artists,” he says, “and I always thought artists would be a possible client base for their work.”

When it became apparent that Serenbe’s residency program would need to supply artist housing in order to grow, he reached out to Rural Studio and proposed a partnership. As fate would have it, Rural Studio was considering ways to field test its designs. Until now students had constructed the buildings using materials donated or funded by contributions, and Rural Studio gave the houses to their clients. Hoping to make the plans available as open-source documents for others — DIYers, Tiny House folks and nonprofit housing advocates — the studio needed to learn what a homeowner would experience in the real world, with a commercial contractor. This would guide the group in further honing the product.

“We’ve had thousands of inquiries from individuals to housing advocates, but Serenbe Development had the scope, scale and capability to do this,” says Auburn architecture professor Rusty Smith, Rural Studio’s associate director.

“We had the ability to take the project through zoning, permitting, construction, code compliance,” says an enthusiastic Steve Nygren, who conceived, developed and runs this balanced-growth community. “We’ll also monitor the homes for such thing as utility costs through a life cycle.”

Smith says the recognition of the two organizations’ shared values sealed the deal. “I appreciated Serenbe’s attachment to place, to what binds a community together. ‘Rural Studio’ is a misnomer in that what we are doing is urban in a small town, trying to hold towns together or keep them from disappearing. Steve [Nygren] gets that. Serenbe is rural but not suburban.”

That the arts are an integral element of the community’s philosophy was also appealing. “We feel residents are enriched by having artists in their midst,” says Nygren, explaining the nonprofit Serenbe Institute for Art, Culture & the Environment is funded by payments made by owners assessed 1 percent value of the purchase price of their residences. The two one-bedroom, one-bath cottages, conjoined by a deck, represent two of the 17 prototypes for Rural Studio’s line of “20K Houses.” Created by succeeding groups of students over the course of eight years, this “product line” is the result of more than 82,000 hours of student research, aided by 74 pro bono consultants. The goal is to create plans for homes that would cost $20,000 to build. (The figure and the moniker $20K refer to the cost of a mortgage that a person receiving median Social Security income could afford.)

To that end, no aspect of the plans, from materials to construction, has escaped consideration and reconsideration. Smith says they have priced materials for these homes, each under 550 square feet, at Home Depot, at about $13,000.

They have chosen construction methods, and sometimes devised new ones, to build for less, save on energy costs and the like. The homes, for example, are built on piers, a method that requires fewer materials and provides airflow that contributes to passive heating and cooling. Overhanging roofs shield the house from the sun. Inside, transoms over the bathroom and bedroom doors aid in cross ventilation. The bedroom is simple, but cozy.

But don’t call it affordable housing. For Smith, the term conjures soulless, faceless warehousing of the poor — the antithesis of Rural Studio’s mission.

“We want to design a dignified home that anyone would want, a place you would want to be,” he asserts.

Perhaps the more appropriate term is considerate housing. Make that considerate homes: Design details throughout are intended to engender domestic comfort. Each house features a welcoming front porch, and while the structures are otherwise sided with corrugated metal for durability and cost-effectiveness, the porches and front doors are wood.

“This is the part of the building that you want to touch,” Smith says. “You want it to be warm and inviting. And owners can individualize it — paint it or stain it to their liking.”

The same thoughtfulness guides other design decisions. “Windows are expensive, so we have fewer, but they are placed carefully for maximum ventilation, with deep sills to bounce light into room,” Smith says. “One is in the kitchen alcove so that the owner can see out.” An interior of a more shotgun-based design.

To say that experience of building these cottages was eye-opening is an understatement. Says Smith, “Designing the house was the easy part.”

Rural Studio was aware of many of the roadblocks its low-income clientele must surmount on the road to homeownership. Getting a mortgage, for example, would be difficult, if not impossible. It went to Regions Bank in Alabama, which has worked on a prototype product (as yet untested), finding creative ways to assess clients’ credit history and fold closing costs into the mortgage.

But this field test demonstrated that building commercially has its own set of challenges. Bottom line: The system is based on long-used norms, and any departure from convention, no matter how logical it is in terms of the individual product, becomes an issue. Those in the Tiny House Movement have faced some the same challenges; in some jurisdictions, for instance, the homes don’t meet the minimum size required by law. The rustic cottages are conjoined.

The houses are not only too small, they are too cheap. Contractors work on commission, generally 20 percent of construction costs. Says Smith, “A contractor won’t get out of his truck for less than $20,000.” That’s hard to do if the house costs less than $100,000. In addition, contractors assess costs based on past experience and rely on subs for materials estimates, usually based on square footage. You can bet that nary a contractor has, like Rural Studio, actually counted the number of two-by-fours needed on a project.

Then there is the matter of construction techniques. “Our buildings are high-performance machines,” Smith says. “If you change anything, the plan won’t work.”

One of the most important takeaways, says Smith, is that Rural Studio needs to create different kinds of construction documents, a kit with instructions, drawings and videos to explain the particularities of the plans and a shopping list of materials.

And $20,000 is still an aspiration. These two cottages and the deck between them cost $135,000 to build. Smith is hoping that if a contractor understands process, he can bring it in more cheaply. Smith will be able to test that hypothesis: Nygren is invested in the collaboration and the concept. He intends to build more cottages and will be raising funds to do so.

He says, “Small houses can live large and affordable housing can have and should have thoughtful design.”