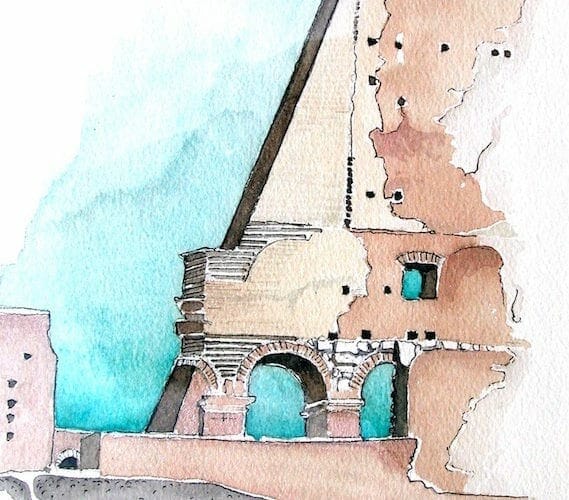 Detail of Phill Tabb's watercolor of the Coliseum in Rome. His Serenbe exhibit opens Saturday and continues through April 18.

NOTE: The closing reception was changed after this piece published. It’s now at 2 p.m. April 11.

When architect Phill Tabb began pondering retirement, he wondered what to do next. He thought of drawing because he’s always had the facility for it. But he didn’t want to do it badly, get frustrated and quit. So he prepared and began drawing regularly 16 or 17 years ago. “Don’t wait until you retire to do it,” Tabb, now 74, advises. “Let’s say you never golf and decide you’ll start once you retire. What happens is you retire, start playing golf and you’re shitty at it — so what do you do? You quit because you’re so used to being good at everything. Whatever your dream, start early and ease into it so that when you retire you’re already there.”

If you know Serenbe, the nature-and-wellness community about 34 miles southwest of Atlanta, you know some of Tabb’s work — he created its master plan. Dr. Phill Tabb: A Retrospective, a multidecade exhibition of his watercolors, sketches and architectural drawings, includes some of his original Serenbe drawings. The exhibit opens Saturday with a 5 p.m. reception and closes April 11 with a 2 p.m. reception (at which Tabb will speak). Both events are free and open to the public. The location: Gainey Hall Gallery at Serenbe, where else?

The retrospective features more than 75 works on paper by Tabb, a teacher, architect and urban planner who writes about sacred geometry (the art of incorporating nature into modern architecture) and biophilic urbanism (a design approach that prioritizes the human experience within built environments).

The works on view range from impressions sketched in 30-minute blasts to more considered, detailed studies that may have taken up to a month to do. Many were done in Italy, where Tabb — a professor emeritus of architecture — spent alternating semesters leading Texas A&M University’s study abroad program.

He approaches his work systematically.

“Typically, I start using a random technique to put down rather quick, abstract, almost erratic lines,” he says. “But when the image comes together and reveals itself as more than a bunch of lines that’s always magical for me. It’s like looking at the night sky and seeing a bunch of random stars before suddenly seeing a constellation.” “Tower Place in San Gimignano” is a 2005 piece done during Phill Tabb’s time in Italy. San Gimignano is a small, walled medieval hill town in Tuscany.

Most of the time he spends on a single piece — about 75 percent — involves the mental and visual process of getting the image down on paper. Once that’s done, Tabb says, the drawing starts talking, telling him what it needs to be complete. That give-and-take at the end is what Tabb finds most exciting.

His work has much to reveal. The closer you get to each sketch and the more time you spend with it, the greater the reward. Tabb says Tower Place in San Gimignano was especially difficult to capture because of its diminishing vertical perspective. A close look at Montagna e Chiesa From Pienza reveals a minuscule cylindrical church in the valley below the tallest mountainous territory in Tuscany and cypress trees with precisely delineated needles.

Tabb exhibits his drawings but doesn’t sell them because each can trigger a sense memory. He can’t look at his sketch from San Gimagnano without remembering his post-lunch beer in a piazza. Montagna e Chiesa takes him back to a terrace overlooking the western side of Pienza, with the late afternoon sun on his face and the scent of cheese in the air. His Pegasus and Genius Loci — an homage to the immortal winged horse that created a healing well wherever his hoof met earth — reminds Tabb to focus on what he can control and create a healing well in his own world. “Pegasus and Genius Loci” is the architectural artist’s homage to the immortal winged horse that created a healing well wherever his hoof met earth.

Tabb spent his early childhood in Hanford, Washington, where his father was a physicist and the family home was less than a block from the Columbia River. The agricultural community was depopulated in 1943 to make way for a Manhattan Project nuclear production facility. Plutonium manufactured there was used in the bomb detonated over Nagasaki, Japan, in 1945.

Tabb remembers being warned to stay away from the river as a child, which only made the forbidden territory more intriguing. “There was something incredibly compelling about a fast-moving, wide river,” he says. “You could really feel the power of nature.”

His reverence for nature deepened when his family moved to Idaho Falls. Tabb was 8 and vividly recalls seeing the Idaho side of the Rocky Mountains’ Teton Range from his living room. He adopted his dad’s love of fishing and smiles at the memory of wearing waders while standing waist high in the Buffalo River. The “water was so clear it amplified the rocks at the bottom,” he says. “The way the water rippled and created a different sound with each interval, it was just like music.” Phill Tabb’s rendering of a street in Florence.

He came to believe that the entire world consisted of geysers, vast mountain ranges and pristine beauty, but discovered an alternate reality when he moved to Ohio to study architecture at the University of Cincinnati. By the time he was a licensed architect, his practice was informed by the values of rugged individualism and a commitment to human-scale structures, solar-oriented buildings and sustainability.

“Many times, we’re stuck inside our heads thinking . . . not feeling and using all our senses,” he says. “But something about the natural environment triggers an awakening. The animal, instinctual side of our brains becomes alert and aware of our surroundings . . . almost like we can see out of the sides of our heads.”

Tabb’s willingness to sit quietly, observe and absorb the atmosphere, and gain perspective without imposing himself shows in his drawings. Still, the drawing experience is bittersweet.

“Drawing is really quite fun until it’s finished,” he says. “It’s like reading a really good book. Nine times out of 10, I get tears in my eyes when I get to the last page, partly because the ending resolves everything, and partly because it’s at the end.”