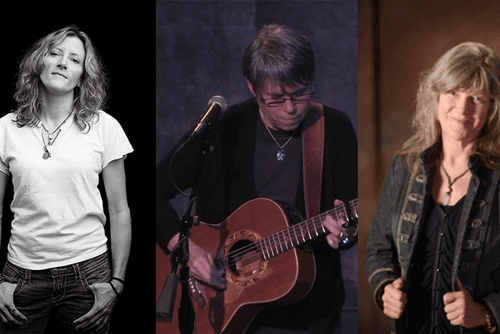 Michelle Malone (left to right), DeDe Vogt and Caroline Aiken perform "in the round" at Eddie's Attic Saturday.

Three icons of Atlanta’s folk scene — Caroline Aiken, DeDe Vogt and Michelle Malone — return home to Eddie’s Attic Saturday for an old-fashioned “guitar pull,” where they will gather in a half circle and take turns playing songs on acoustic guitar. “I’m really so excited to be sitting on stage with those two people. I feel fortunate,” says Aiken, who is viewed as the godmother of the folk scene that produced the Indigo Girls, Shawn Mullins and even John Mayer.

All three remain forces in Atlanta music. Malone has embraced a blues/rock sound and last year released the critically lauded album Slings and Arrows. Vogt now owns a studio in North Georgia and is director of performing arts at the Sautee Nacoochee Center. Her music served as the score for an Atlanta Ballet piece in 2015, and her latest album, Messy Life, came out last year. And Aiken has focused her energy on her New South Showcase weekly radio show in Athens on WUGA-FM that features performances and interviews with Southern musicians.

An Atlanta native, Aiken has released nine albums and has opened shows for the likes of Doc Watson, Bonnie Raitt, the Indigo Girls, Derek Trucks and John Prine. ArtsATL caught up with Aiken last weekend as she prepares for the Eddie’s Attic show and then her first West Coast tour in four years. Aiken talked about the early days of the folk scene, meeting Malone and Vogt and the legacy of Eddie’s Attic.

ArtsATL: What’s coming up for you? You have the radio show, and you’re about to tour for the first time in four years. 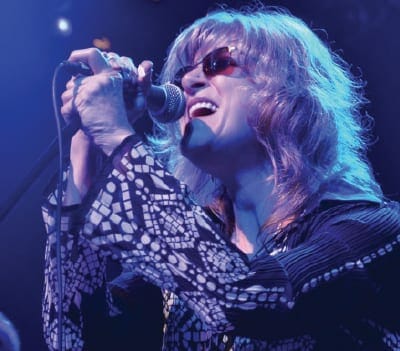 Caroline Aiken: I had a hernia operation, and during that time, I really got into the Athens community. I started the radio show and the New South Showcase three years ago. We have the acts come into the studio in front of an audience. We record them live and play it live.

It’s been four years since I’ve been on the road. The last time was a six-month U.S. tour and European tour when I released Broken Wings Heal in 2015. This year, I’ll play in Austin, Seattle, Los Angeles and Monterey. I’m breaking the age ceiling now. I just hit 64, and I’m finding that when I go see someone play at a club, people think I’m the band momma [laughs]. Before I go west, we have this show at Eddie’s. DeDe, Michelle and I have been doing these shows over the years, and I always look forward to them.

ArtsATL: When did you meet DeDe?

Aiken: Oh, my, we met back in 1978 at the Harvest Moon Saloon, which was on Piedmont Avenue at Lindbergh. She was gigging all by herself with a guitar, and she let me sit in. Then we were in a band together, the Pretty Good For Girls Band, for a year. And I’ve been playing with DeDe since then. We’ve been friends. We were the ones who helped the Indigo Girls get a foothold. And that didn’t take long.

ArtsATL: What about Michelle?

Aiken: She was 18, and I met her through Amy Ray [Indigo Girls]. She told me I had to meet this girl and hear her sing. So I went over to Amy’s apartment to hear Michelle play. She was really shy, just a baby hiding behind her hair. I hadn’t heard the best of her yet.

ArtsATL: How do you look back on that period, which was such a vibrant time for music in Atlanta?

Aiken: As it’s happening, you don’t think it’s special — it’s just how it is: OK, dinner is served. In the moment, you don’t think about how extraordinary it is. Competition was always a bummer for me; I thought it was a sick motivation. My whole stance was all-inclusive, and if you blew me away, that was the cherry on top. It excited me; I was happy to see someone better than me who could kick my butt. It was a great time. And DeDe really set the tone.

ArtsATL: All three of you have history at Eddie’s Attic stretching back to the beginning.

Aiken: I’m real loyal to Eddie [Owen]. I started working with Eddie when he was at Trackside Tavern in the mid-80s. I had already played that space when it was a restaurant. Eddie told me he was going to take over that space for Eddie’s Attic. Me, Michelle, DeDe, Shawn Mullins, the Indigo Girls, everybody helped him open that place. It’s good to go back to that room. I always miss Eddie there, but he has the Red Clay Music Foundry in Duluth, and that’s a great room. But nationally, worldwide, everybody knows Eddie’s Attic. A piece of him will always be there.