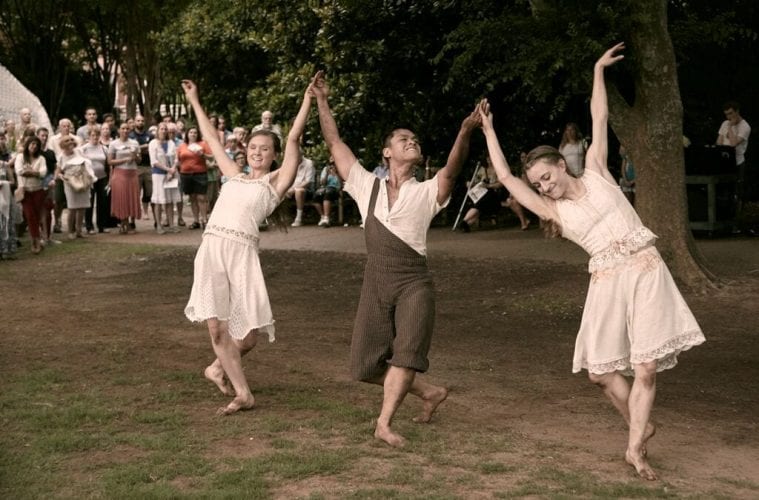 When Dede Vogt hung up her “working musician” shoes a few years ago, she didn’t leave behind her chops — she simply became more involved in the technical side of music. She ran a recording studio for several years, then moved to North Georgia and opened a music store. After that, she became the director of performing arts at the Sautee Nacoochee Center.

Vogt — a pioneer of the Atlanta/Decatur folk music scene who served as an inspiration to such artists as the Indigo Girls and Michelle Malone — never dreamed, however, she would score an original ballet piece.

Vogt says she was a casual dance fan before Atlanta Ballet’s summer off-shoot troupe — Wabi Sabi — did its first residency at Sautee two years ago. She gained a new appreciation for the athleticism of the dancers when she got to see Wabi Sabi up close. Vogt approached the troupe’s founder, John Welker, and asked if he’d be interested in hearing some of her music. “I had these little classical guitar instrumentals and decided I had nothing to lose, so I asked if I could submit a few,” she says. None of those made the cut, but Welker encouraged her. And when she sent in a slide guitar part that was “just a thing” she’d once laid on tape, Welker played it for Heath Gill, an Atlanta Ballet dancer who was looking for music for his second choreographed piece for Wabi Sabi.

Gill’s response was instantaneous: “Oh, we have to start my piece with that.”

Wabi Sabi will perform Gill’s creation, “IDYLL,” and three others Friday at 7 p.m. at the Woodruff Art Center’s Sifly Piazza, then again Sunday afternoon at the Serenbe Playhouse. The Woodruff performance is outdoors and in case of inclement weather, it will be rescheduled.

In addition to “IDYLL,” Wabi Sabi’s WHIM program will feature new works from three other choreographers: Tara Lee, Sarah Hillmer and Robyn Mineko Williams. Aside from Williams — a member of Hubbard Street Dance Chicago — the choreographers are all homegrown products of Atlanta Ballet. Lee and Gill are company dancers; Hillmer is a ballet mistress.

Vogt was also an Atlanta fixture before she moved to the mountains. Her groups the Scallion Sisters and Paper Dolls were groundbreaking local bands in the 1980s that paved the way for the folk scene that grew out of the Little Five Points Pub and, later, Eddie’s Attic. She went on to play with the Indigo Girls, and also was a founding member of Cowboy Envy. Aside from a 40-second snippet from the Alabama Shakes song “On Your Way,” Vogt’s music now makes up the entire score. The sound ranges from a mournful and bluesy slide guitar to a lively bluegrass-flavored section.

Gill’s piece is joyful and playful, and Vogt’s often-dark music score provides a tension that elevates the choreography. “I wanted to inspire a certain feeling,” says Gill. “With this piece, I was trying to capture a certain vibe. I wanted to create something almost nostalgic for people. We do a lot of drama, so it was fun to do something that touches on the inner child.”

Vogt saw the piece for the first time when the troupe performed at Sautee earlier this month. “It was thrilling,” she says. “I didn’t know what to expect and, all of a sudden, my heart felt like it had wings attached to it.”