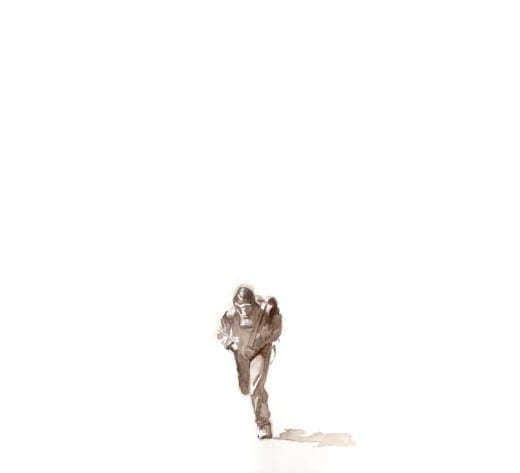 Robson’s Figure Group fills a wall with small watercolor figures he produced at the self-imposed rate of one per day. Working mostly from model-railroad figures, he presents images that isolate a diminutive, backgroundless figure in a corner of the watercolor paper. There is nothing of the uncanniness that Laurie Simmons once accomplished by photographing the perfunctorily formed heads of figures also made to populate model railroads, but Robson achieves his own brand of uncanniness by mixing figures that seem bland and painfully stereotypical with others that are strange or ambiguous.

One figure pitching hay is decidedly an old-style farmer, while another brandishes a scythe as if he were a revolutionary icon from the Stalinist 1920s. A woman dressed in clothes that bespeak homelessness pushes a shopping cart loaded with boxes that suggest the aftermath of a shopping spree.

Citizen depicts a man in a gas mask which he copied from a news photo of a Greek protester. A sniper hides among the everyday figures. Such encounters lead to the sense that more surprises lie hidden in these meticulously rendered monochromatic studies. This is reinforced by the similar surprise delivered by a triptych, oil on panel, in which two men wear business suits, one is in monastic garb, and one is levitating — not necessarily the one you would expect. Sherer presents a substantial number of his pyrograph–and-wood-stain refigurings of ’50s boys’-life pictures, in which he makes explicit the homoerotic subtext of most of the wholesome outdoor activities celebrated in the original genre. Sherer now extends the humor in directions ranging from the whimsical to the ludicrous, posing a boy at poolside touching the finger of the boy in the pool like Michelangelo’s God-and-Adam duo in the Sistine Chapel or portraying a boy in a museum ogling a muscular Greek statue (Budding Aesthete).

There are ample examples of his Scout-oriented imagery, such as mouth-to-mouth resuscitation jokes in the form of a nearly-capsized rowboat in Full Steam Ahead.

Sherer’s attempt to spill over into Norman Rockwell territory goes heavy-handedly awry in “Sodomites!” — which is the accusation being hurled by an indignant elderly judge at two hand-holding Cub Scouts improbably hauled into court. The venture into The New Yorker cartoon territory in Window Treatment is slightly more successful, transferring today’s headlines into yesteryear’s private revelations: “Oh, Robert, how could you?” she wails, and “Please call me Babette,” he replies. This adroitly executed (mostly) good fun contrasts with the pieces on display in the back gallery from Sherer’s “sanguineous art,” as he calls it. For example, a drawing and a silkscreen featuring agricultural allegories copied from Confederate banknotes is, according to the label, executed in African-American blood. Sherer’s sendups of Americans’ longtime refusal to acknowledge boyhood homosexuality have become almost conventional fare, but the Blood Money: Scenes from Human Currency series retains its power to shock.