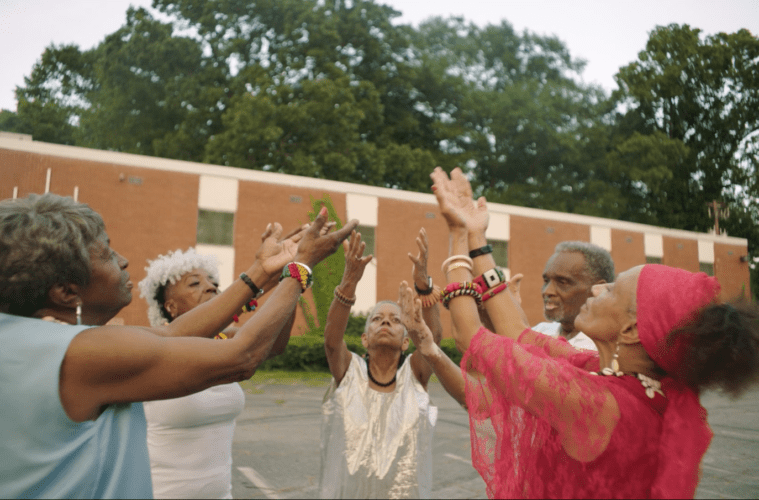 Like all intuitive teachers, Dr. Theresa Howard has a knack for meeting her students where they are.

While earning her Master of Science in Dance Movement Therapy at Hunter College, the Brooklyn native offered inmates on Rikers Island tools to reconcile past trauma, cultivate human connection and express themselves through movement. As a case manager for the Fulton County Office of Aging, she incorporated movement therapy in all of her practices — whether serving clients at home, under bridges or in soup kitchens, shelters or illegal dwellings. And as founder and artistic director of the Edeliegba Senior Dance Ensemble, she has encouraged former truck drivers, educators, administrators, flight attendants and social workers — women and men aged 60 to 87 — to keep it moving post-retirement.

Recently, Howard’s work with Edeliegba has traveled from local venues to the cinema screen, finding new relevance and expression in I Snuck Off the Slave Ship, a film by Lonnie Holley. The self-taught artist’s Atlanta-made short film was featured in the 2019 Sundance Film Festival and is now slated for its hometown premiere this Thursday evening at the Plaza Theatre as part of the Atlanta Film Festival program titled It’s a Beautiful Day in the Neighborhood.

“Edeliegba” means the elders have gathered with completion among the Hausa people of northern Nigeria, and the senior performers have a long history of appearing in liturgical and concert settings in Atlanta. Often entering in procession, dressed in white, the performers’ simple gestures, such as reaching out with open palms or circling their upper bodies in unison, emanate deep and resonant power. Pearl Cleage has commissioned the ensemble to dance at the High Museum. They have performed at Sisters Chapel at Spelman College and given command performances at Georgia State University’s Rialto Center for the Arts.

Holley’s film features Edeliegba prominently, and in his Afrofuturist world, where the artist’s imagination is a form of resistance, the elders convey a connection to the spirit world.

How Edeliegba came to be featured in Holley’s film is a story of preparedness, trust and a bit of serendipity.

When Holley wanted to illustrate the connection between celebration and survival in his music video “Sometimes I Wanna Dance,” he found what he was looking for when Edeliegba crossed his radar.

“When planning the production, we knew we needed something or someone who could convey a spirit of joy and verve non-verbally,” says Matt Arnett, who coproduced and cast the video with Brittany Nugent. They wanted a cast that included both young people and elders. “Brittany did some research online and found Theresa. Who knew such a group existed? Once the cameras were rolling, Lonnie did not tell them how to dance. We just played the music and trusted them to express themselves. They were way better than we imagined.”

The shoot went so well that Nugent asked the dancers to improvise a second dance in a separate location before wrapping for the day. Ever ready for a new adventure, Howard’s troupe followed her lead — trying to keep straight faces as they obeyed her choreography cues delivered in stage whispers. When Holley saw the footage, he decided to incorporate it into I Snuck Off the Slave Ship.

And Holley says he hopes it will serve as a reminder that “we need to get up, move our muscles, keep physically fit and not become couch potatoes.”

“The myth is that you get to a certain age, slow down, sit back and rock,” says Diana Stevens, a retired information technology specialist and cofounder of Jomandi Productions, who has been performing with Edeliegba since its inception in 2004. “But that’s not us at all. There’s nothing we don’t think we can do. Sometimes I forget I’m 71!”

The same can be said of Howard.

When it comes to measuring energy, there are amperes, volts and kilowatts. But the electricity she exudes, even when sitting perfectly still, is infinite.

Her ramrod straight posture, long neck, lifted sternum and extended spine suggests she is incapable of slouching. Her gait is purposeful, direct and fast. She is capable of bursting in motion as if spring-loaded. Even when shod in a pair of dainty, high-heeled sling-backs, there’s no telling when she might catapult from her perch to demonstrate the tension required to articulate Alvin Ailey’s signature gull-wing arms from Revelations or the release of Louis Falco’s “floppy” style of choreography. And she wears her curly hair in a tightly coiled bun.

Everything about Howard screams dancer. But she was not born this way. A one-time track star, she aspired to anchor the 4×400 relays at the Olympic Games. Those dreams were dashed, however, when her athleticism caught the eye of a high school dance instructor who recruited Howard on the spot. Though she loved getting down to popular music with the twist, the jerk and the monkey, modern dance made no sense to the teenager, and she chafed at the stylized, restrictive nature of ballet.

Everything changed, however, when Howard first crossed paths with Judith Jamison — then a dancer and muse to Ailey — who used to visit Howard’s high school periodically.

“When Miss Jamison walked down the hallway, she was like something extra-terrestrial,” says Howard. “She didn’t even look like she belonged on the planet! She was like somebody from out of this world.”

Willing to give dance a second chance, Howard found her sweet spot in the call-and-response exchange between dancers and drummers when moving to live music. Abdel Salaam choreographed his first ballet on Howard. Dancing with his Forces of Nature troupe, Joan Miller & The Chamber Arts Dance Players and Baba Chuck Davis’ ensemble awakened her curiosity about Africa and the diaspora. She was also captivated by the masked dances and articulation of the fingers and hands of Balinese dance, calling them the most beautiful things she’d ever seen.

By sophomore year of college, she was committed to being a dancer. Then she reached a turning point after observing a dance movement therapy session in the psychiatric ward at Bronx State Hospital one year later.

“I saw patients in the throes of mania, catatonia and delusional thinking at Bronx State, and started to wonder what else dance had to offer besides performing,” says Howard. “That’s when I realized the dancer person I’d become had to disintegrate, because when I was in performance mode, I couldn’t really see and feel the human pain, despair or depression that was right in front of me.”

Fifty years later, that insight remains foundational to Howard’s philosophy as a civil servant, dancer, choreographer, therapist and educator who serves on the dance faculty at Kennesaw State University and Emory University. A recipient of the Joan P. Garner award for Outstanding Service to the Arts, Howard was feted at ARTS ATL’s 2019 Luminary Awards ceremony, in partnership with Fulton County Arts and Culture. She has also been instructing grade-schoolers at Ballethnic Dance Company since 1992. “I am not a stand-in-the-corner-and-guide-by-just-talking type of instructor,” says Howard. “I don’t go in there with a curriculum, because the therapist part of me can’t know what might be needed that day, or what could develop during the process.”

Her other gift is an ability to see things in her students they cannot see in themselves — imbuing them with courage in the process.

“I was shaking backstage before a recent performance,” says Ebony Woods, a 70-year-old former physician’s assistant who has been performing with Edeliegba for 12 years and cops to getting butterflies in the stomach precurtain. “My hands and feet were sweating, but when Theresa looked at me and I looked at her, she just calmed me right down. It happens every single time. And once the audience sees we’re still moving and grooving, it gets them out of their seats and inspires them to do something with their lives!”

Howard’s dancers are living proof that aging needn’t be anathema to vitality, self-discovery and playfulness. And don’t get her started on the benefits of movement as a deterrent to the cross-generational plague of isolation, sadness and depression that is epidemic.

“I’ve been saying Just do it! long before it became a slogan,” says Howard, whose tenacity ultimately got her to the Olympics when she was invited to perform during the Opening Ceremony for the 1996 Games. “Keeping the body, mind and spirit active can change lives. I have dancers who never dreamed of performing live, but now they love showing off for audiences. Others have told me they felt so alone before forming the kinds of friendships at Edeliegba that now make them want to live. Can you imagine? How powerful is that?!”