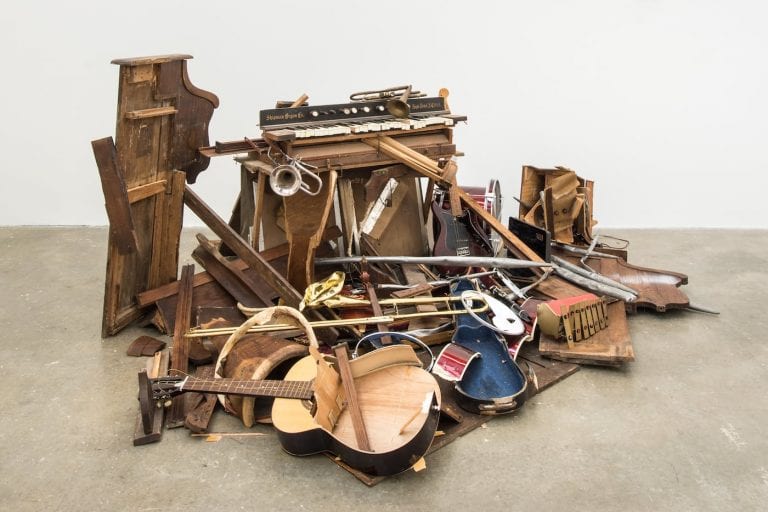 (All images courtesy of Atlanta Contemporary. Photography by Fredrik Brauer.)

One of the works that visitors to Lonnie Holley’s I Snuck Off the Slave Ship (at the Atlanta Contemporary through April 2) are likely to notice first is a large freestanding steel sculpture from 2016 titled The Seer. Holley writes of it in one of the text blocks that offer commentary on most of his artworks: “We are all seers one way or other . . . Some of us are even foretellers and are able to see things before they happen.”

The companion piece to this, From Within, visits the past instead of the future, paying homage to Holley’s roots in Birmingham, Alabama, once a steel town. Other works in the exhibition also revisit his personal past, notably Momo’s Rake, a 2013 assemblage consisting of a rake head found on what had been his grandmother’s property, fastened to a long branch. It honors her lessons to the young Holley in recovering useful objects from the dump with, yes, a rake.

Far more of the assemblage sculptures by this now globally recognized self-taught artist deal with the larger context of African-American past and present. The show reflects unusually intelligent curation and placement of works in its provocative juxtapositions; for example, the thematic relationship between The First Time We Heard the King, 2015–2017, and the adjacent Rights Are Fragile, Handle Them With Care (In the Grip of Power II), 2017. In the former, an old voting box sits on a chair between the family memorabilia hung on the wall above a radio (representing the living room of a Black household) and a similarly arranged White household with a picture of George Wallace and a wall plate featuring the Great Seal of the United States of America. The latter is an actual voting machine with a handgun welded to one side and a mirror in the center of it, reflecting the viewer. This work is related to a video by Holley edited by Ethan Payne, In the Grip of Power, in which Holley assembles the voting-machine artwork of that title and declares that it will continue to deliver his urgent appeal to “Vote, vote, vote.’ (Editor’s Disclosure: Payne is a videographer who regularly contributes to ArtsATL.)

Other videos (all of which, incidentally, are available by searching “Lonnie Holley” on YouTube) provide a sampling of Holley’s career as a musician, from his breakthrough homage to Queen Elizabeth’s birthday, Six Space Shuttles and 144,000 Elephants, to a collaboration with musicians Bradford Cox and Cole Alexander performing From the Other Side of the Pulpit.

Despite what seems like the predominance of works from 2016, and 2017 (and note that the show opened only 12 days into the new year), Holley’s longtime concerns and styles are more than adequately represented. Among the works on paper, one outstanding but easily overlooked piece is Pollution on the Landscape, a sand on paper, representational work from 2008 that rhymes thematically with other work about environmental neglect. But as mentioned earlier, most of the works here deal one way or another with African-American cultural and historical issues, sometimes subtly and humorously, as in the provocatively titled I Can Breathe (Life Behind the Mask), a concrete lawn jockey wearing a found-object gas mask. Another piece also from 2016, a vintage wooden chair with equally vintage boxing gloves hung over one corner of it, is a specific threefold memorial homage: To the Greatest: Pride in the Everlasting Fight (For Grandmama, American Veterans, and Mohammad Ali).

More often, the references are general, as in two powerful works from 2007 and 2008 memorializing “all young people who died too early.” The earlier work, Boy on the Hood’s Cross, suggests the desperation of young men in particular, while the artificial rose and actual child’s sneaker of Too Young for Lost Flowers is a lament for lost children as delicately evocative as a Joseph Cornell box, one of many occasions in which Holley demonstrates his ability to compete spontaneously with the greats of modernism, and to outdo them in sheer diversity.

It would require a review at least twice the length of this one to do justice to all the work in this exhibition, especially the 2017 installation of disassembled musical instruments titled After the Revival (Vox Humana III: The Strength of Music Lives After the Instruments Are Destroyed). On the Atlanta Contemporary’s exhibition webpage, an Ethan Payne video of Holley creating the piece by destroying a Vox Humana organ’s pipes and keyboard gives only a hint of why this is, in Holley’s words, “not demolition to disrespect. This is demolition to respect.”

The first is 2016’s Waking Up in the Bed of Death (Seeing the Marchers’ Dreams Die), a full-size bed occupying the center of the gallery, accompanied by a long disquisition that ends with, “Sometimes I feel let down by how unwilling we are to keep struggling for what is just and right. . . . Wake up! Become alert. We can’t keep dreaming and letting those dreams die.”

The other is Another Blue Ribbon First: America’s Chemistry, also 2016. This precarious-looking stack of, among other things, an oil can, a watering can, and a White House Vinegar bottle atop a wooden powder keg is accompanied by a text that offers the reflection, “America is one big chemistry experiment. . . . In America, we have tried to make all people fit and work together. But this whole experiment happens right on top of a powder keg that could go up in flames at any moment.”