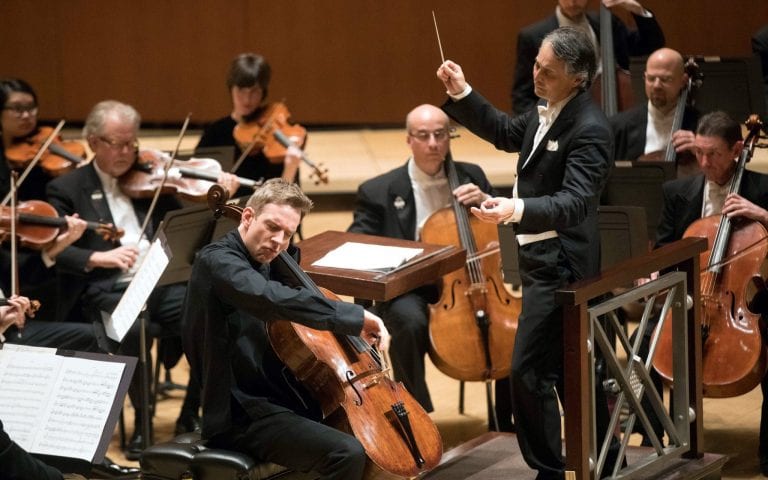 Ah yes, it was Groundhog Day, but regardless of what predictions any Marmota monax may have conjured for the upcoming six weeks, the ASO’s program seemed clearly bent on looking toward the advent of spring.

Märkl and the ASO opened the concert with the orchestral suite “Le Bourgeois gentilhomme” by Richard Strauss. The suite was written as incidental music for Hugo von Hofmannsthal’s revival and revision of Molière’s 1670 comic play of the same name which would also introduce a one-act opera by Hofmannsthal and Strauss, Ariadne auf Naxos. The combination proved unsuccessful, and the two works were revised and went their separate ways. Strauss added more music to the play and then extracted the orchestral suite of nine movements, choosing not to include some of the music he’d composed for the stage work.

For those whose familiarity with Richard Strauss’s music is limited to large, heady orchestral tone poems from the 1890s like “Till Eulenspiegel’s Merry Pranks” and “Also sprach Zarathustra” (in particular the opening “Sunrise” fanfare used in Stanley Kubrick’s film 2001: A Space Odyssey), the neoclassical style of his “Le Bourgeois gentilhomme” may come as a surprise, with its much smaller orchestra and Baroque allusions. In fact, three of the suite’s movements, nos 5 to 7, are based on music by 17th-century composer Jean-Baptiste Lully, who wrote the music for Molière’s original comédie-ballet.

Märkl’s energy switch was on from the moment he appeared on stage — and perhaps well before. He does not slack or hesitate on the podium. His quick baton and conducting gestures only give enough time between movements to allow the space to be a marker, as opposed to a pause, and the musicians must have a clear sense of readiness to jump right into the next movement.

This and the smaller orchestra brought forth the music’s more transparent, blithe and occasionally humorous qualities, as when Strauss jokingly quoted the music of Verdi, Wagner and his own in the suite’s final “Dinner” movement with respect to various foods: when mutton is served, he quotes the “sheep music” from his own tone poem “Don Quixote.”

Cello soloist Johannes Moser then joined Märkl and the ASO to perform Pyotr Ilyich Tchaikovsky’s “Variations on a Rococo Theme, Op 33” (1876). The “theme” is actually Tchaikovsky’s own, although it deliberately hearkens back in time to early “classical” style, inspired by Tchaikovsky’s love of the music of Mozart, without being purely imitative. As with the Strauss suite, a smaller complement of strings was involved in this performance. Fortune of fortune: rather than perform the more commonly heard version arranged by German cellist Wilhelm Fitzenhagen, Moser presented the audience with Tchaikovsky’s original, absent Fitzenhagen’s changes, in a brilliantly lyrical, emotionally extroverted performance.

Moser then played a much more introspective encore, the “Sarabande” from J.S. Bach’s Cello Suite No. 1 in G major — which, most curiously, was the same encore he played the last time he appeared with the ASO in February 2012, following his performance of Edward Elgar’s Cello Concerto with guest conductor Roberto Minczuk.

After intermission came Robert Schumann’s Symphony No. 1, also known as the “Spring Symphony,” his first symphony work, composed in early 1841 with the encouragement of his new wife, Clara. He had primarily been known for his compositions for piano and voice, but Clara, a stellar pianist herself, felt her husband’s musical imagination was too restricted by piano and required orchestra to bring it to fruition. How fortunate her observation and gentle push.

It was indeed a metaphorical spring of the heart in full bloom for the next half hour, from the opening theme of the larger, Romantic-sized orchestra to its final chords. The ASO’s performance glowed with radiant sunlight, filled with optimism.