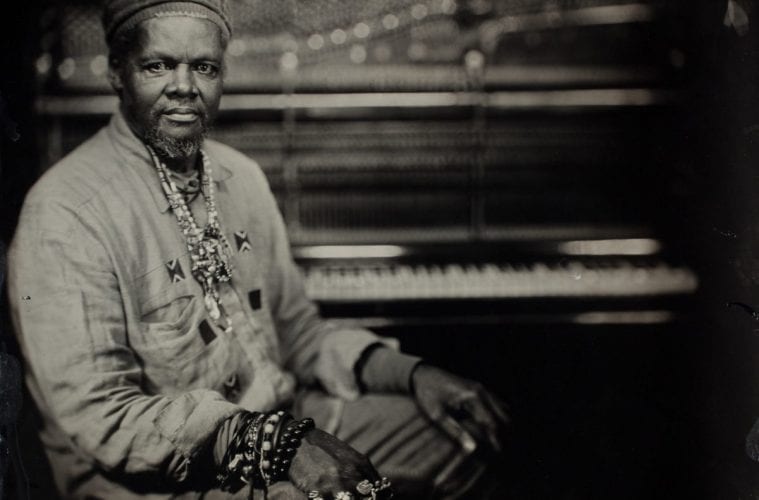 Lonnie Holley’s music is as difficult to define as is his visionary art. His acclaimed sculptures, intricately assembled from refuse and other found materials, are housed in the permanent collections of the Metropolitan Museum of Art, the Whitney and the Smithsonian, but in a span of just six years, he has also built a formidable body of music that lays bare his intensely personal inner world. Although the recorded songs are a relatively recent phenomenon, they’re seemingly forged from the same process of improvisation and self-discovery used to create his visual art. With his latest album MITH, releasing September 21, the artist embarks in an ambitious new direction, creating sound worlds that plunge the listener deep into his singular psychological and emotional landscape while squarely examining the current climate of American politics.

Born in Birmingham, Alabama, in 1950 at the zenith of the Jim Crow south, Holley was the seventh of 27 children. He was taken from his mother as an infant and raised by a burlesque dancer in a whiskey house on the state fairgrounds. A jukebox in the house played a steady stream of rhythm and blues, big band, country and bluegrass music. As a child perched on the roof, Holley watched horror and sci-fi movies from the drive-in theater next door: he credits the experience of hearing the classical, jazz and contemporary music scores as strong influences on his own music making.

Around the age of 11, he was sent to the Alabama Industrial School for Negro Children (a reformatory school that was, by many accounts, essentially a slave camp), where song often accompanied the hard labor. After an attempt at escape, Holley was tied to a tree and savagely beaten with a stick soaked in oil. The cruelty of his chaotic childhood, he says, contributed to his closing out the external world and retreating inward. Since 1979, Holley has pursued his singular visual style in vernacular art. He began making tapes of songs he would sing while he made his work, and after years of experimentation, he found a partially functioning Casio keyboard at a local Goodwill. He repaired it himself and took to crafting a patchwork of improvised songs based on local news reports, neighborhood stories and personal reflections of his early life.

Holley’s first two albums, 2012’s Just Before Music and 2013’s Keeping a Record of It, appeared on the Atlanta label Dust-To-Digital. With MITH, he moves to the Bloomington, Indiana-based Jagjaguwar, a label that champions a diverse lineup of independent American music including such acts as Bon Iver, Angel Olsen and Dinosaur Jr. The album was recorded in locations as disparate as Portugal, Oregon and New York City, as well as his adopted hometown of Atlanta. This new album comprises 10 songs recorded over a span of five years and features fellow cosmic musician Laraaji, experimental duo Nelson Patton (Dave Nelson, trombone, and Marlon Patton, drums, Moog bass) and visionary producer Richard Swift.

Holley is an inspired improviser with a gift for fractured storytelling. His music seems to emerge from the same sense of experimentation and repurposing of cultural artifacts as his visual works. The lyrics highlight his knack for wordplay and rhyme, and he frequently riffs on repeated phrases and rhythms that build into an organic mantra. This process of constructing and deconstructing allows Holley a freedom to explore a frenetic lyric creativity that results in a sort of psychedelic sermon.

The songs take a musical substrate and build it into a dense sonic fabric charged with intensely personal lyrics. Holley explores the full range of the piano and weaves a beautiful melodic lyricism on the harrowing song “I Snuck Off the Slave Ship.” He sings a duet with himself over a relaxed jazz arrangement that’s vaguely reminiscent of an Alice Coltrane interlude on “There Was Always Water.” A childlike curiosity slowly unfolds through the song “How Far Is Spaced-Out?” that features a Jamaican dub style of reverb-soaked keyboards, trombone glissandos and lazy beats. The Nelson Patton duo builds a fraught tension that simmers relentlessly throughout the anthem “I Woke Up in a F**ked-Up America,” as Holley rails against chronic racial discrimination. A spacey spiral of psychedelia bubbles continuously on the track “Coming Back (From the Distances Between the Spaces of Time).”

The effect of experiencing Holley’s art, either visually or sonically, is one of accumulation. His songs inhabit a world of their own construction that morph slowly but surely over static or swirling sounds. Slowly penetrating the layers of meaning in this rich collection yields a trove of creative listening that continues to reward.