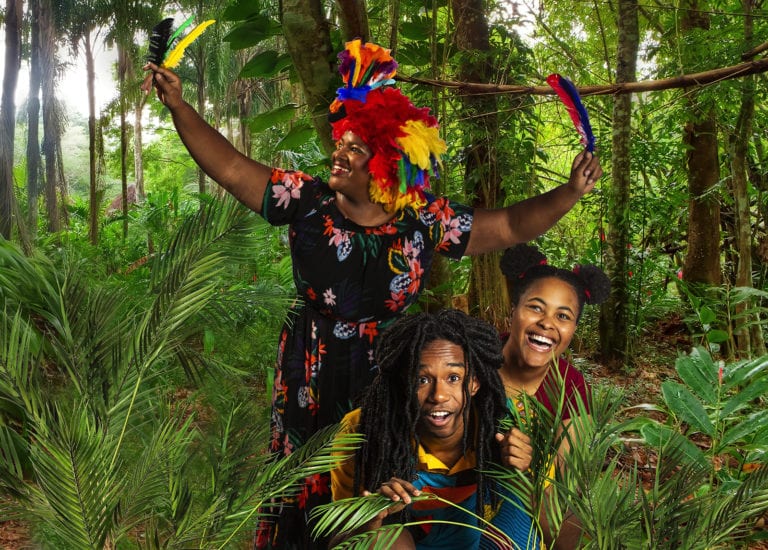 Synchronicity Theatre has rescheduled its remounting of "Bob Marley’s Three Little Birds" from January to June. The company originally staged the musical in 2019.

Every Thursday, our editors and guest writers give you their top six picks for the weekend’s best shows. This weekend, the Super Bowl takes over the city, but for those who like to have a little art with their football, there’s still plenty to do. Be sure to check out our metro Atlanta theater map to see a full list of performance venues by county.

Kenny Leon’s True Colors Theatre Company, Josh Wilder’s Wrong River As the water crisis in Flint, Michigan, begins to make national headlines, a young couple struggling to make ends meet scrambles to fight for a better future for their daughter — even if it means losing everything they have. This new drama by emerging playwright Josh Wilder explores how we care for the most vulnerable people in our nation. February 1 at 7:30 p.m. at Southwest Arts Center.

Alliance Theatre, Ever After To christen its new Coca-Cola Stage, the Alliance is staging a musical adaptation of the beloved 1998 film Ever After. Based on the story of Cinderella, Danielle de Barbarac endures living with her icy stepmother and twitty stepsisters, until a chance encounter with Prince Henry alters her fate. Get ready for Renaissance-era costumes and happily ever after. Through February 17.

Synchronicity Theatre, Bob Marley’s Three Little Birds Ziggy is a shy Jamaican kid who stays inside to avoid facing his fears, but that all changes when he meets some bold, boisterous tropical birds. Based on the children’s book by Cedella Marley, reggae singer Bob Marley’s eldest daughter, Three Little Birds is a musical for all ages. Featuring some of Bob Marley’s most beloved songs, the show’s message of peace and living life to the fullest is sure to resonate with everyone. Through February 24.

Horizon Theatre, The Wolves There’s no “I” in team, but if there were, it would stand for “intense,” which is the perfect way to describe the drama unfolding in The Wolves. This 2017 Pulitzer Prize-finalist is not your average coming-of-age tale. The story is centered on a high school girls’ soccer team getting ready for the championship that could make or break their chances at college scholarships. Through a series of pregame warmups, playwright Sarah DeLappe explores everything from sex to immigration in this girl power dramedy. Through March 3.

Catalyst Arts Atlanta, K2 What would you do if you were stuck on the side of one of the world’s highest peaks in subzero temperatures? Catalyst Arts Atlanta invites the audience to answer this and far more introspective questions in their immersive production K2. They’ve erected a mountain in The Bakery and turned down the heat to create a one-of-a-kind theater experience. Be sure to take advantage of the blankets and hot tea. Through February 9.

Aurora Theatre, A Doll’s House Part 2 Powerhouse Atlanta actress Tess Malis Kincaid is back as Nora in this coproduction between Actor’s Express and Aurora Theatre. Based on Henrik Ibsen’s famous 19th-century play A Doll’s House, this sequel by Lucas Hnath finds the Helmer family years after their matriarch has left. With nothing but loose ends to tie up, A Doll’s House Part 2 explores the conflict of shaping marriage and motherhood for the modern woman. Through February 10.