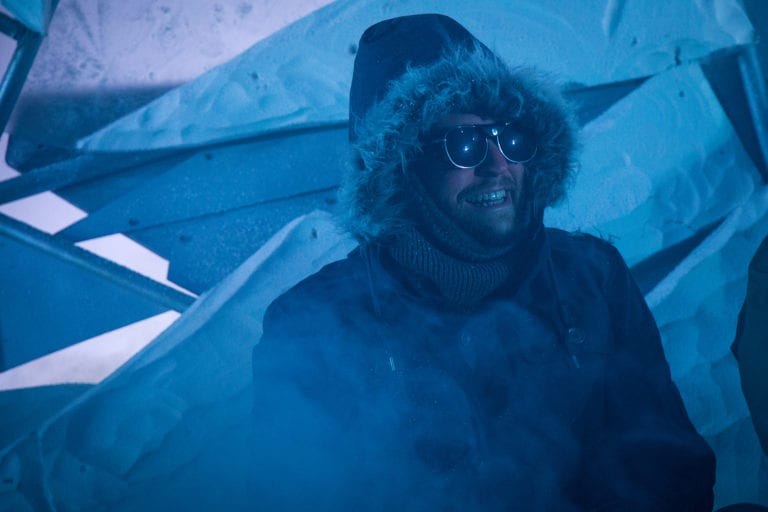 Review: Catalyst Arts Atlanta’s “K2” takes us to edge of one of world’s highest peaks

Immersive theater can be uncomfortable. Being stranded on one of the world’s most dangerous mountains at 27,000 feet in subzero temperatures is even more uncomfortable. In K2, Catalyst Arts Atlanta’s newest production, it has created an authentic experience in which audience members can become acutely familiar with how it feels to be caught on a literal and metaphorical precipice, with nothing more than dwindling supplies and blind faith.

K2 runs through February 9 at The Bakery in East Point, where the audience can huddle in a tent and drink hot Sherpa tea while being warned that cold temperatures await within the space. Grab one of the coats, blankets or sleeping bags provided, because the immersiveness of the piece isn’t worth extreme discomfort.

Nuclear physicist Harold (Dan Ford) and his attorney general friend Taylor (Joel Coady) find themselves deep into their quest to be a part of the momentous experience of reaching the summit of China’s K2, the second-highest mountain in the world. At the beginning of the drama, they are injured, immobilized and missing a rope that’s vital to their descent. Harold and Taylor seem to be two very different people with the same extreme hobby — one a family man, the other a ladies’ man with a cavalier attitude about love. As they work through the physical impossibilities of their situation, they also work through the convoluted reasons why they’re there.

Beyond the draped entryway, a blue haze fills the space, establishing the precarious situation of the climbers and adding an eerie effect as the set is swallowed in a total white-out. The lighting offers a tremendous advantage to the overall simplicity of the set. With only two actors, a slanted playing space of roughly 20 feet and an abundance of white, Maranda DeBusk’s lighting design succeeds in its simplicity and contrast. An icy-blue wash with a sharp, bright, orange light from beneath the ice creates surreal moments of ascension. Soft, yellow light through the fog heightens the awareness of being lost in nothingness.

The set, designed by Barrett Doyle, is a truly remarkable piece of construction. It physically demands connection to the actors by covering them in snow and limiting their room to move. Coady and Ford demonstrate remarkable stamina, not just by being the only two actors in the room but because of the athleticism required of them. Taylor scales the “mountain” and hangs suspended above the audience, still able to keep our attention with his monologues on fear of loss.

As both men begin to come to terms with the danger they’re in, they realize that life on Earth comes down to the same thing for everyone: holding on. The experience of K2 makes a powerful piece of theater that gives us a closer proximity to death-defying human endeavors we may never willingly encounter.