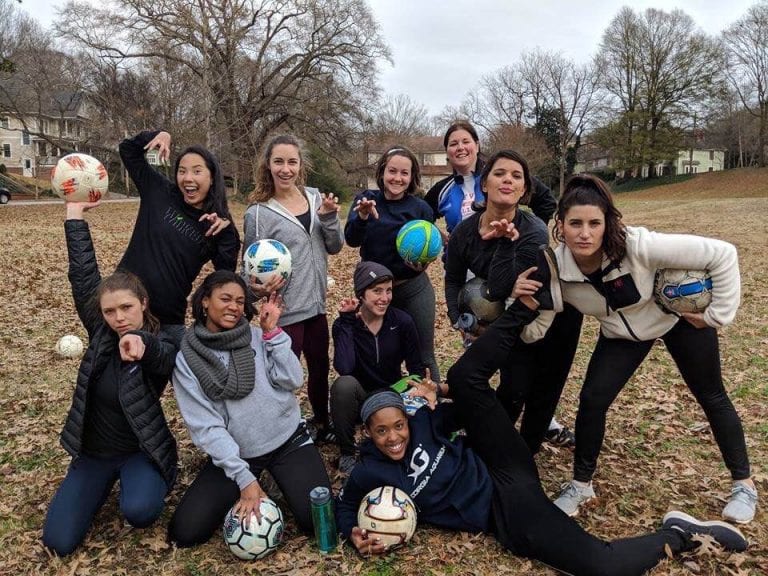 Horizon Theatre turns into a spring green soccer field for The Wolves, featuring an all-female cast.

When most people think of teenage girls, they conjure images of makeup and meltdowns, but in Sarah DeLappe’s play, The Wolves, she portrays them as warriors. Horizon Theatre Company is turning its Little Five Points space into a soccer field and is inviting the audience into the world of 16- and 17-year-old girls through a season’s worth of pregame warmups. Under the direction of Heidi Cline McKerley, who has directed the musical hits Freaky Friday, The Toxic Avenger and Avenue Q at Horizon, The Wolves runs January 25–March 3.

While we see glimpses of their various roles outside of the stadium — girlfriends, daughters, students — within it, they are two things: pack members and warriors. Their identities as members of the Wolves soccer team are so emphasized that the script identifies them by the numbers of their jerseys rather than by their names. As the girls spend the play rethinking worldviews, maneuvering interpersonal relationships and discovering who they are as people, the one thing they never do is stop moving. They run drills, stretch and practice one-on-one throughout the entire play, all the while talking to, and over, each other.

The team’s world, lovingly referred to by McKerley as “Planet Soccer Girl,” is one that DeLappe has fairly recent personal experience living in. The Wolves was first workshopped when DeLappe was 24 — less than 10 years older than her characters.

“She was involved in soccer . . . played for years and years,” McKerley points out at rehearsal one afternoon. “The dialect which she writes in is very specific to something that she clearly knew a lot about.”

Most of the cast — including actors Jasmine Thomas and Erika Miranda — are also close in age to the characters. Miranda mentions that they often find themselves spending rehearsal breaks in side conversations that would not be out of place within the script itself. Miranda plays #46, the team’s new girl — the only fresh face in a group of young women who have playing with, and off of, each other for most of their lives. Thomas plays #25, the team’s captain and sometimes substitute coach, who spends the show balancing between self-discovery and trying to maintain order within the team.

“Honestly, it brings back a lot of memories from high school in general,” says Thomas, who grew up playing soccer. “I don’t think I’ve ever done a play that has hit so close to home for me, so it’s been really fun.”

The camaraderie among cast members is evident, but anyone expecting a story akin to an uplifting sports movie will find themselves in an environment that is more similar to a battlefield. At a time in the girls’ lives when they’re being scouted for colleges, the stakes are future and identity-defining. Victory against the school down the road becomes a matter of life or death in their suburban, middle-class world.

The past year (truly the past decade) has felt much like a watershed moment for the grim realities sometimes facing young women. The experience of womanhood has been evaluated and reevaluated against a series of social backdrops and think pieces on the internet — everything from equal pay to Lean In to #MeToo to Time’s Up. Miranda says the audience is going to see a full picture of what a woman can be and is in the show.

McKerley has been an associate artist at Horizon for many years and believes that there is no time like the present to return to the ensemble-based, female-driven work that serves as the theater’s foundation. The Wolves features an all-female cast and production crew. For McKerley, more than shedding light on the cultural moment, The Wolves is a testament to girl power.

“We look at these girls and go, ‘I can do that. I can get through tomorrow,'” McKerley says. “I want [the audience] to have a renewed spirit of their own inner warrior.”