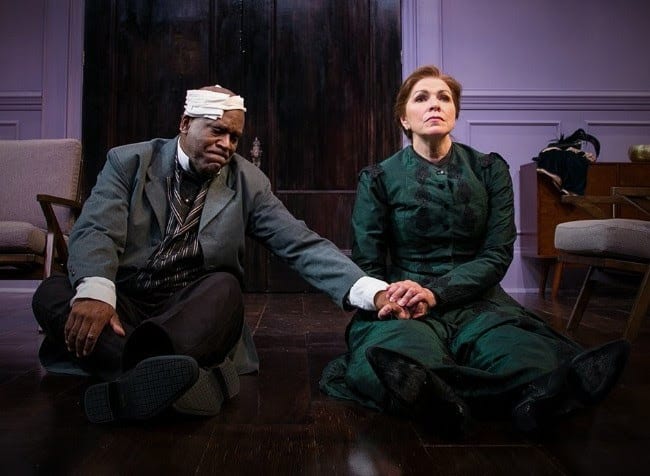 A mainstay of high school reading lists, Henrik Ibsen’s proto-feminist play A Doll’s House contains one of the most famous departures in theater history, up there with A Winter’s Tale stage direction, “Exit, pursued by a bear.”

First performed in 1879, A Doll’s House ends with Nora Helmer, a dutiful wife and mother, discovering that her husband Torvald has no real respect for her and that she can only be fully realized by walking out on her marriage. Her exit line “Torvald, I’m leaving” memorably sends her on the first steps to female independence, or so the audience hopes.

Part of the moment’s power is how it leaves you wondering about Nora’s future. More than a century later, playwright Lucas Hnath offers one plausible scenario with A Doll’s House, Part 2, running through September 30 at Actor’s Express (in collaboration with the Aurora Theatre, where it will be staged in January). Directed by Freddie Ashley, the sequel cleverly strikes a balance between contemporary social relevance and self-aware comedy. But it never quite escapes the shadow of its predecessor, assuming it even could.

Fifteen years after the Helmer household door fatefully slammed shut, housekeeper Anne Marie (Deadra Moore) opens it to find Nora (Tess Malis Kincaid) on the stoop. The image of Nora framed in the doorway, wearing a prosperous green dress and a long feather in her hat, all but announces “She’s back!” While Nora liberated herself from a stifling marriage, she remains a woman constricted by the institutional sexism of 19th-century Europe. A combination of personal and professional crises have brought Nora back to Torvald’s house, even though she doesn’t want to see her former husband (Rob Cleveland) and doesn’t know how to reconnect with her grown children.

Nora reveals to Anne Marie that in the past years she’s become a successful writer, a choice by the playwright that has literary precedent: Ibsen based the character partially on a Norwegian novelist, Laura Kieler. Nora reveals that her first hit book was highly autobiographical and clearly very much like A Doll’s House itself, so in the new play, the characters can essentially comment on their own literary influence. The metafictional conceit feels a bit convenient to the play’s thematic ambitions.

Scholars often treat Nora as a burgeoning feminist activist, and in Part 2, the new Nora has become exactly that. Early on, she launches into a passionate speech denouncing marriage as a destroyer of lives. Kincaid portrays her as confident in her beliefs and relentless in her decisions while possessed of a blunt, sardonic sense of humor. It’s a bit of a challenge to square Kincaid’s fierce, hear-me-roar performance with the naïve Nora of the original play, although her transformation is the point of the sequel.

The show casts Nora as a heroine for the #MeToo era, but not in a simplistic way, as Hnath considers the impact of her return and beliefs from every angle. Nora is forced to reckon with the consequences of her choices, particularly during a strained meeting with the daughter (Shelli Delgado), who doesn’t remember her. Nora bemoans the limits society places on women, but Anne Marie points out that, as a servant, her options were even narrower, revealing the different implications for feminism on the working class vs. the upper middle class. Moore hits the character’s comic relief aspects while conveying the weight of her life choices.

And the production gently mocks Torvald rather than demonize him. Cleveland’s background as a comedy actor fit the conception of the character. While Torvald embodies a certain kind of male privilege, he seems more befuddled by his estranged wife than outraged by her, as if he never really made sense of her absence in his life.

A Doll’s House, Part 2 has fun with the idea that it riffs on an old classic for a contemporary audience. Between scenes, character names flash in all caps on a wall, and crunchy guitars play as the set gets drenched in colorful light. The dialogue sounds contemporary and colloquial, with “okays” or f-bombs dropped for comic effect. When Nora confronts Torvald about his condescension, the word “mansplain” seems to hang in the air without being spoken aloud.

All of the choices in the script and Actor’s Express production seem creatively sound and justifiable. It offers rich characters and some substantive arguments, yet doesn’t quite transcend its gimmicky concept. When Nora imagines a future free of marital oppression in “20 or 30 years from now” or a character tells her, “There’s the door; I know you know how to use it,” the dialogue seems pitched too directly at the contemporary viewer.

For a story about personal independence, A Doll’s House, Part 2 seems paradoxically dependent on Ibsen’s original. It’s entertaining and powerful, but also just a little too cute — no condescension intended.