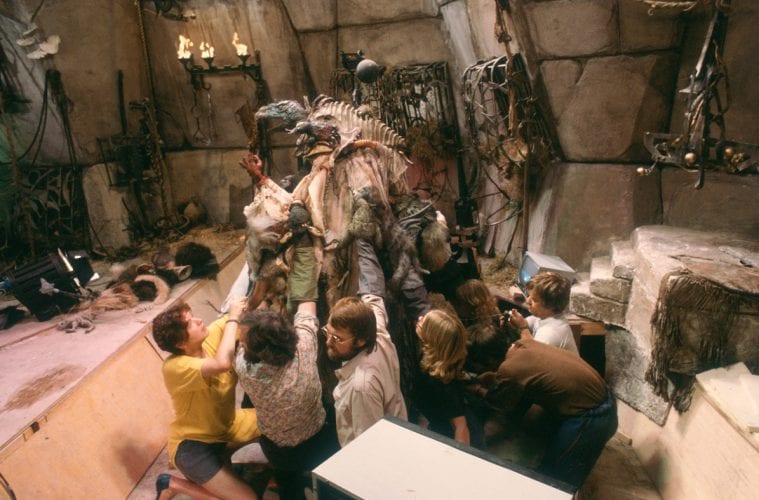 Around the turn of the 21st century, cinema entered what we might call the CGI age. Computer-generated visuals began rendering otherworldly creatures and landscapes; memorable characters such as Lord of the Rings’ Gollum and Guardians of the Galaxy’s Groot have no real-world presence, but only exist as lines of code.

There’s still something singular about practical effects, which take up space and have a solidity that CGI lacks. A new exhibition entitled Jim Henson’s The Dark Crystal: World of Magic and Myth at Atlanta’s Center for Puppetry Arts showcases the compelling charm of more than 50 tangible artifacts once used to create a wholly fantastic realm on film.

Codirected by Jim Henson and Frank Oz, The Dark Crystal arrived in cinemas in 1982, riding a wave of interest in fantasy stories and special effects epics following the success of the original Star Wars in 1977 and its 1980 sequel, The Empire Strikes Back. Doubtless, Oz’s puppetry work on the series’ Yoda character helped make an all-puppet high-fantasy film seem more viable to studio heads at the time. Henson’s interest in exploring a fantasy feature film predated George Lucas’ blockbuster space opera and coincided with his weird Land of Gorch sketches on Saturday Night Live in the mid-1970s. Blown-up reproductions from Henson’s 1978 treatment The Crystal line the walls at the exhibition’s entrance. Wall text nearby reveals one of the exhibition’s most interesting factoids: Henson only secured funding for his dream project The Dark Crystal through a deal that also required him to make the more surefire hit The Great Muppet Caper. The Dark Crystal turned a modest profit on release but developed a cult following over the years. The film proves a mixed viewing experience today. The beings and landscapes of the alien world of Thra are as superbly realized as the characterizations are strikingly pedestrian. Even by the standards of 1980s fantasy epics, the characters tend to be one-dimensional, with bland heroes and interchangeable villains. Perhaps the extreme demands of creating the special effects encumbered other aspects of the project. Whereas Henson tapped old-fashioned vaudeville and Hollywood comedy tropes to create memorable personae for the Muppets, the interior lives of The Dark Crystal’s inhabitants seem sketchy, restricted and inhibited.

Nonetheless, the exhibition puts the film’s best face (or beak) forward. A section on the design, evolution and building of the film’s alien entities illuminates the filmmakers’ creative process. A prototype hand of a Skeksis includes a visible pistol grip and trigger, and several Skeksis’s heads demonstrate the different materials and complex series of cords required to bring them to life.

Another section, The World of Thra, is devoted to the film’s de facto stars: the finished puppets. Most memorable are a pair of complete, human-sized puppets of a Skeksis and a Mystic (beings whose interdependent dichotomy is revealed in the film’s finale). On both, the minute level of craftsmanship and creativity rewards close attention. The fierce Skeksis seems to radiate arrogance and corruption, while the monk-like, four-armed Mystic has a serene, unnervingly human expression on its face, the folds and whorls on his garments seemingly patterned after ancient traditions.

Also on hand are puppets of the protagonist Jen, a hobbitlike Gelfling and the outspoken soothsayer Aughra. The latter, performed by Oz, seems strangely pitched between his other signature characters, Yoda and Miss Piggy, yet she remains the most vivid and memorable personality from The Dark Crystal. In the end, perhaps nothing in the film proves more impressive than its invented, fantastic, but somehow entirely plausible flora and fauna. The final section emphasizes the film’s legacy with book covers, photos from a Dark Crystal fashion line timed with the film’s release and other ancillary products, including the puppet protagonists from the winners of a 2016 Dark Crystal Fan Film Contest. There’s also a plug for the upcoming Netflix prequel series, The Dark Crystal: Age of Resistance.

The Dark Crystal fans who visit the exhibition should be sure to also visit the Center’s permanent collection, which displays some great objects from the film not represented in the new temporary exhibition. There’s a fascinating scale model of the “Crystal Chamber” in the Skeksis’s lair and the costume of the lead female character Kira. A case includes such diminutive creatures as Fizzgig, the rolling, dog-like animal that often handily upstages Jen and Kira, the ostensible heroes.

But best of all is the enormous puppet for one of the repulsive Garthim, the lumbering, insectoid guards of the Skeksis. Nothing better conveys the intricacy and inspiration that lay behind The Dark Crystal than a close look: with its roachlike carapace and oversized crablike claw, it resembles a bug bred for centuries to cultivate brute force and menace. Even if thin characterizations kept The Dark Crystal from becoming a true classic, spending some time with its artifacts helps viewers to appreciate the incredible art and craft behind the film and, for a moment, to play tourist in its singular world.