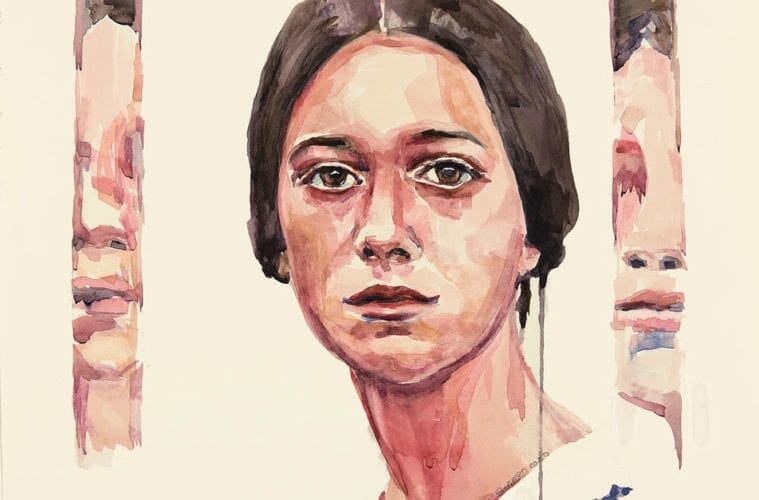 "Jane Eyre and Emancipation: 12 responses" includes the trifold watercolor "Jane's Reflection" by Virginia artist Sharon Shapiro. Shapiro says it comments, in part, on how the act of looking at oneself in the mirror can be a means for analyzing and even creating the self. The show runs through February 29 at Poem 88. An event with music and readings takes place February 14.

“I am no bird; and no net ensnares me,” declares Jane Eyre in Charlotte Brontë’s seminal novel. “I am a free human being with an independent will.”

Charlotte Brontë published Jane Eyre in 1847, some 50 years before the women’s suffrage movement took hold in Britain. She published it under the pen name Currer Bell at a time when women were often commanded to confine themselves to the home rather than dedicate themselves to an intellectual or creative career. Brontë’s novel was groundbreaking for this period in history, presenting her readers with a self-actualized female protagonist who goes on a kind of hero’s odyssey toward liberation.

“The protagonist of Jane Eyre in literature was something really revolutionary for its time,” says Robin Bernat, owner/curator of Poem 88 gallery. “Jane Eyre also provided commentary on class and status, on all the impediments to change and all the confines of social convention.” 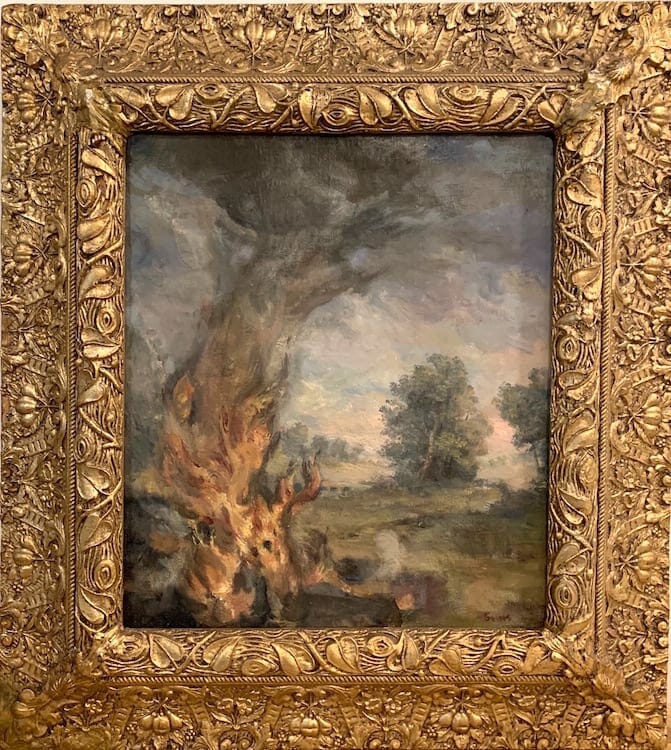 Indeed, some could argue that Jane Eyre is revolutionary still, hungry as some contemporary readers are for stories of more fully drawn, complicated women who refuse to be reduced to a gendered stereotype.

Encouraging people to revisit the famed Victorian novel from a more current cultural context was a big part of Bernat’s motivation for curating Poem 88’s newest exhibition, Jane Eyre and Emancipation: twelve responses (through February 29). Note, too, that the gallery will hold its annual Valentine’s Day salon, featuring live Victorian chamber music by a local string quartet and readings from Brontë’s novel, on February 14.

The exhibit “is giving that prompt to people to think about the book in another way,” Bernat says, “because I think a lot of people just kind of think of it as a gothic novel or as an aspect of Victorian literature. In academic circles they may talk about the feminist themes, but I’m not sure in a more general audience whether that’s a focus or not.”

In her curatorial statement, Bernat notes that Jane Eyre “encompassed proto-feminist ideas, commentary on class and status, a reverie for the English landscape and most importantly, commentary on the strictures of social convention and romantic love.” The pieces in this exhibition — including paintings, photography, drawings and etchings — offer a wide variety of interpretations of these themes. 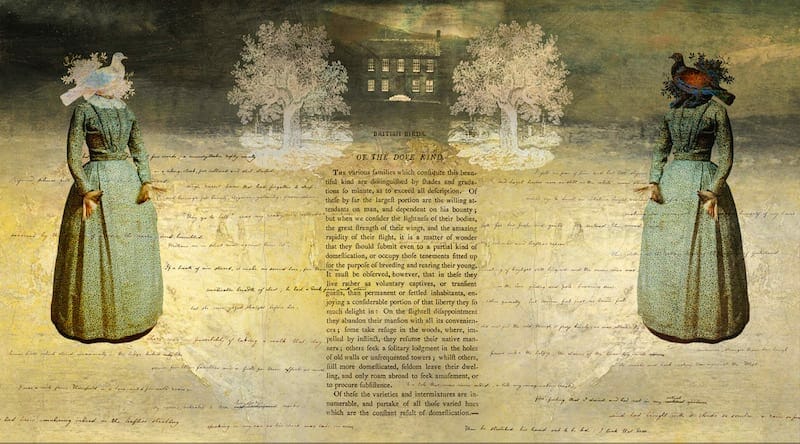 “Of the Dove Kind” is a collage-like archival digital print by Atlanta artist Judy Henson.

Virginia artist Sharon Shapiro, whose contributed three watercolor portraits, has been exploring feminist themes in her work for two decades.

“I have been mining the territory between girlhood and womanhood via a nascent sexuality — one often created through the trappings of adult femininity — for more than 20 years,” she says in an email. “The ‘male gaze,’ a term that was established in 1975 by feminist critic Laura Mulvey, addressed how women are often objects for male consumption, and I attempt to subvert that gaze.”

In her watercolor, Jane’s Reflection, which is a kind of trifold portrait, Shapiro comments on “how the act of looking at oneself in the mirror as a woman is more than just a tool for beholding the self or seeing how the world views her as an object, but is also a means for analyzing and even creating the self.”

Jane confronts a mirror in three important scenes in the novel, Shapiro says. In one, Jane compares herself to a “tiny phantom, half fairy, half imp.” In another, she is a “robed and veiled figure.” 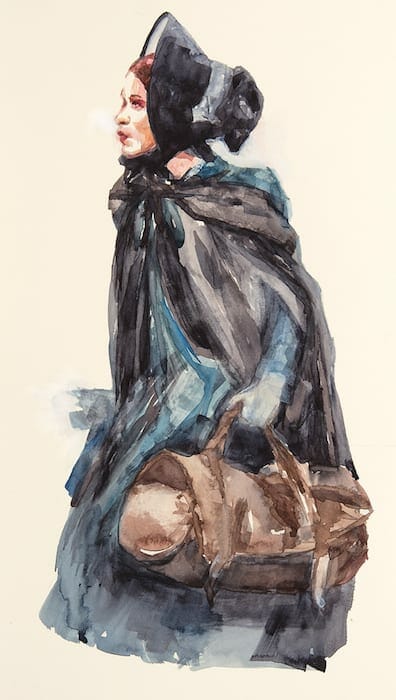 The Sharon Shapiro watercolor “On Her Own Terms” shows Jane leaving Thornfield Hall.

Says Shapiro, “Three times she sees an image that is someone else, both literally and metaphorically. In facing these otherworldly observations, Jane takes an important step, however unconscious, toward radical freedom.”

Shapiro’s other pieces, Drawing Helen and On Her Own Terms, also explore the different ways in which Jane Eyre embodies a bold female emancipation — when she is drawing in her sketchbook, exploring her own interiority through art and when she decides to leave Thornfield.

“Charlotte Brontë creates a female character who shapes her life and her concept of herself outside of social and psychological forces that define women as images in the glass,” Shapiro says. “At the end of the novel, Rochester’s blindness is the final measure of Jane’s freedom from definition as an object of masculine vision.”

Multidisciplinary Atlanta artist Raymond Goins, whose Liberté is in the show, explores the imagery and themes of Jane Eyre from a different perspective.

Liberté, a landscape oil painting of a tree engulfed in flames, asks viewers to consider Bertha Mason’s character. Mason was Rochester’s first wife, considered violently insane and kept locked in an upstairs room in Thornfield Hall until she sets fire to the house. Some see her as Jane’s foil in the novel — a woman trapped and suffocated by the confines of domesticity.

“The painting is a scene that could have been a remnant view from Bertha’s window after she set fire to Thornfield and jumped to her death,” says Goins. “The fire and smoke is a spirited display of strife. The rising dawn in the distance, a new day.”

Jane Eyre and Emancipation reminds viewers that Brontë’s heroine is more than a revolutionary figure for her own time. She is a kind of totem for the subversion of traditional, stereotypical femininity now, a useful model still of intelligent, complex womanhood.

“I see at intervals the glance of a curious sort of bird through the close set bars of a cage: a vivid, restless, resolute captive is there,” Rochester says to Jane in the novel. “Were it but free, it would soar cloud-high.”