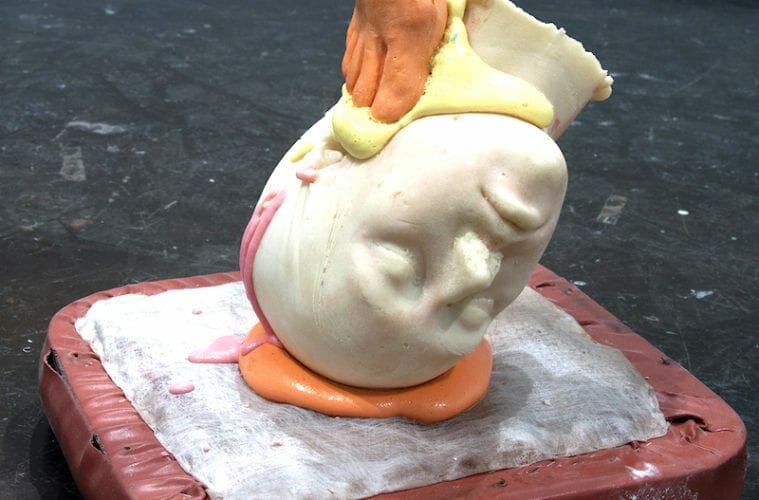 This Hanna Newman piece is part of her two-person "Body Double" show with Melissa Huang, opening tonight at The Bakery. Its sculptures and surrealist paintings ask viewers to look more closely at beauty standards and their impact.

Jerry Cullum’s Notebook is a monthly survey that highlights some of the most notable art + design happenings in metro Atlanta. Cullum has written about art + design in Atlanta, and beyond, for decades.

Some of you know of my fondness for a revised version of the old-fashioned categories “nature and culture.” Once you accept that the two can’t really be considered separately, the pairing lets you explore an immense number of ways of thinking about human beings and how we live in the world around us.

Sally Mann’s 1983–85 At Twelve series, exhibited along with her Remembered Light and Landscapes at Jackson Fine Art through December 21, is a particularly fine example of art that presents the interactions of culture with nature in a specific part of the American South. (The Jackson Fine Art show complements the ongoing A Thousand Crossings survey of Mann’s work at the High Museum of Art). “Ianna and Doom” (1983–85) is among the Sally Mann photographs on view at Jackson Fine Art through December 21, a complementary exhibit to the High Museum of Art’s larger Mann survey.

Each At Twelve photograph reveals as much about the world in which these 12-year-olds lived as it does about the young women themselves. The 2012–16 Remembered Light photographs are even more involved with culture — in the more familiar meaning that involves art, since it documents the studio of painter Cy Twombly, Mann’s friend and neighbor for many years.

Taken shortly after Twombly’s death, the series in many ways extends Mann’s exploration of how culture in the larger sense is part of all human interactions, even when humans interact with Southern landscapes usually thought of as purely “nature.” The photos from the Georgia series at Jackson Fine Art exemplify this, and A Thousand Crossings has analyzed it brilliantly.

Mary Ann Mitchell’s Dreamscape installation — at Thomas Deans Fine Art only through November 9 — offers something quite different, a landscape of dream into which visitors enter. Like the wet-plate collodion photographs that Mitchell digitizes and alters, the misty images printed on semitransparent cloth banners evoke a past that simultaneously feels real and wholly fictional. Mary Ann Mitchell’s “Dreamscape” installation at Thomas Deans Fine Art is in its final days. See it through Saturday, November 9.

A wall-filling video projection that forms the banners’ backdrop completes the sense of entering into a dream narrative that we can’t decipher, or a set of symbols that invites us to make up our own stories about the figures and natural features in the photographs.

This sense of concealment invites contemplation and carries over into Traces, the other Thomas Deans exhibition. In Carl Linstrum’s Foreground series of paintings, foreground foliage appears to be wreathed in mist with the background completely obscured. (The other works, abstract paintings by Allison B. Cooke and sculptures by Eileen Braun, relate less directly to this theme.)

Another exhibition dealing with elusive memories and dreamlike associations immerses viewers in an environment as assertively disorienting as Mitchell’s is subdued. Marcus Kenney’s Dreams River, at Marcia Wood Gallery through December 14, combines large, weathered found objects with neon lighting to evoke states of being that viewers may never have encountered before. Although it’s possible to trace lineage and historical precedents, Kenney has gone off in creative directions that I can’t yet analyze but can gasp at in admiration. (Look for an upcoming review.) Adair’s meticulous, complex prints and drawings also flip the script on stereotypes but do so with regard to a malignly misogynistic book about women as witches and vehicles of damnation in general. Some of the book’s most inflammatory passages are reproduced, struck through and crossed out in Text & Hammer, a complicated combination of letterpress printing, chine collé and pen and ink.

Other prints depict such things as creatures believed to be witches’ familiars and a spectacular 78- x 54-inch painting that restages Dürer’s Witch Riding Backwards on a Goat, circa 1500. A memorable set of sculptural wax, graphite and shellac, Flies, which perches ominously on the wall between the prints, supplements the works.

Adair has a parallel body of work in Kai Lin Art’s four-person show, Passage (through November 15, with artist talks at 1 p.m. November 9). Steven L. Anderson and Larry Jens Anderson (no relation) exhibit new examples of their signature styles — tree-ring imagery from Steven and, from Larry, wittily pointed commentaries on society’s response to LGBTQ issues. Anderson’s acerbically satirical merit badges have more than kept pace with dialogues on these matters but also, and soberly, to gun violence. Adair presents images associated with the myth of Lilith as Adam’s rebelliously independent first wife — another case of inventive misogyny in biblical text. See this piece and others by Melissa Huang in “Body Double” at The Bakery, opening today and continuing through November 21.

Misogyny and female embodiment is addressed at The Bakery Atlanta in Melissa Huang and Hanna Newman’s new two-person show, Body Double (today–through November 21). The show’s sculptures and surrealist paintings deal with “the psychological distress that comes from expectations of women, while playing with redefinitions of societal norms,” according to organizers. It invites viewers to take a closer look at beauty standards and their impact. Tonight’s opening reception begins at 7 p.m., and an artists’ talk will take place at 2 p.m. November 17.