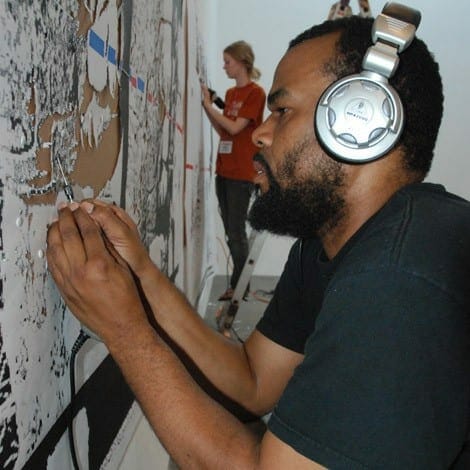 Jamal D. Cyrus, who lives and works in his hometown of Houston, will receive a $25,000 prize from the High Museum of Art.

The High Museum of Art announced Tuesday that multidisciplinary Houston artist Jamal D. Cyrus is the 2020 winner of the David C. Driskell Prize, given annually for contributions to African American art. It comes with a cash prize of $25,000.

Cyrus, who’s in his 40s, has a conceptual, research-driven practice that interrogates American history within the framework of black political movements, the influence of the African diaspora and social struggle.

“I see my work as a form of self-education,” Cyrus says. “Due to the illegality of teaching the enslaved to read and write, and the subsequent lack of access to education following Emancipation and well into the middle of the 20th century, the action of teaching oneself has a long history within black culture.”

Cyrus’ work has been featured in more than 40 solo and group exhibitions in the past 15 years and is in the collections of the Museum of Fine Arts, Houston, and the Blanton Museum of Art in Austin, Texas. The High Museum presented his work as part of the artist collective Otabenga Jones and Associates in After 1968: Contemporary Artists and the Civil Rights Legacy (2008), a companion exhibition to Road to Freedom: Photographs of the Civil Rights Movement, 1956-1968.

The High Museum established the Driskell Prize in 2005, naming it for Eatonton native David C. Driskell, the renowned African American artist and scholar who’s now 88 and an emeritus professor at the University of Maryland, College Park. The Driskell Prize was the first national award to celebrate contributions to art of the African diaspora. It goes to a U.S.-based, early- or mid-career scholar or artist whose work makes an original and important contribution to the field.

Cyrus will receive the prize April 24 at the 16th annual Driskell Prize Dinner at the High Museum. Proceeds from the dinner support the David C. Driskell African American Art Acquisition Restricted and Endowment funds. Since the prize’s inception, proceeds have supported the museum’s acquisition of 50 works by African American artists.