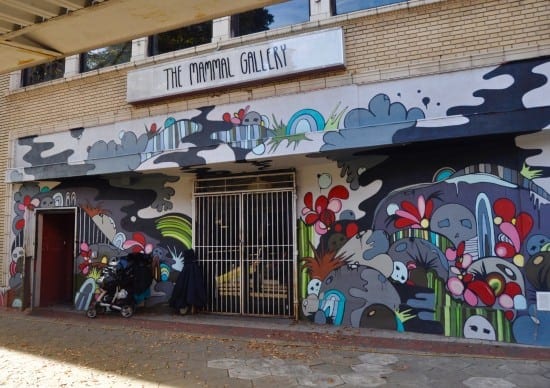 Mammal Gallery was one of the first art spaces to open on South Broad. It was set to re-open at The MET before the pandemic. (Photo by Allie Goolrick)

Barely a year after establishing its new West End location, The Mammal Gallery is now set to close permanently because of the Covid-19 pandemic. Beloved by many in the local DIY music and art scene, the venue provided an open and welcoming space for young musicians and misfits.

The Mammal Gallery was couched within The MET, a 1 million-square-foot former warehousing complex at 680 Murphy Avenue off Metropolitan Parkway. Local real estate developer Carter & Associates acquired the property in June 2018, hoping to transform the site into a rustic arts and entertainment destination, with The Mammal Gallery serving as an anchor tenant to a slew of creative office, retail and dining tenants.

In April 2019, The Mammal Gallery signed a 10-year lease for approximately 6,100-square feet of warehouse space at The MET, which would be transformed into a 300-person performance venue and art gallery with professional audio and lighting systems. Also included in the lease was an iconic blue water tower adjacent to the warehouse space, which would have housed a hospitality-driven bar and coffee shop surrounded by a seating area shrouded in plants and bamboo. The redevelopment project was estimated to cost $500,000 to $750,000, sourced from institutional investors and crowdfunding.

The Mammal Gallery had already been hosting smaller-scale live music events and open-mic performances within its temporary food court space at the MET for the better part of year, with a planned hard-opening date of the full venue at the beginning of March 2020. But March 2020 had other plans. Performance venues were among the first businesses mandated to close indefinitely as a result of the Covid-19 outbreak, making Mammal a much less viable anchor tenant for The MET’s greater experiential development project that would seek to attract crowds of customers.

“The Mammal Gallery was a great learning experience for us, and we are so proud of what we have been able to accomplish since it started,” says co-founder Chris Yonker. “But there is still so much we don’t know about the virus, and I don’t blame investors for not feeling comfortable with us anymore. I don’t even feel comfortable opening a new music venue right now.”

The Mammal Gallery team might have dodged a bullet with the timing of the outbreak, Yonker says, as it would have been a nightmare to sink all that money and energy into building the new space only to have it closed by the pandemic. But for those familiar with Mammal’s history, it might feel like the ill-fated venue just can’t catch a break.

Along with co-founder Brian Egan, Yonker started The Mammal Gallery in 2013, one of the first businesses to open in the budding Downtown DIY music and art scene on South Broad Street. Along with Eyedrum Art & Music Gallery, Murmur and Broad Street Visitors Center, Mammal helped bring new social attention and patronage to the neighborhood, much of which was vacant or in disrepair at the time.

German development firm Newport Holdings, owner of most of those buildings as well as the nearby Underground Atlanta, planned to redevelop the area as a prominent retail and entertainment district near the Mercedes-Benz Stadium. After a fire in one of the vacant buildings that killed one person in February 2018, most of Broad Street was forced to close until the buildings could be brought up to code. The old Mammal Gallery space was permanently closed but the team continued to host occasional events and galleries at other venues, including The Bakery Atlanta, before finding a new home at The MET.

“The old Mammal Gallery was a constant project, retroactively repairing things that were broken while working in a fixed space. The new Mammal Gallery was the first time we really got to design our own space from scratch,” Yonker says. “We wanted to cater to the perspectives of touring musicians, concert-goers and what we thought would be cool to have in a venue. After a couple months of doing shows, it felt like we were finally picking up some steam and we were getting some great feedback.” The Mammal Gallery became one of the city’s most popular DYI music venues when it opened on South Broad Street.

Yonker is a musician himself, known for his current role as the drummer of Omni, as well as his former roles in local bands Karaoke and Hello Ocho. Last year, he released a solo project under the name Greenscreen, which featured collaborations with several former bandmates and other local musicians. Yonker says the pandemic forced him to cancel a lot of shows, including national and European tours with Omni, but has given him time to focus on some home improvement projects and his tattooing side-hustle.

“I don’t feel like much of a musician right now — I can’t play shows or go to them, and I don’t even know when that will come back,” Yonker says. “Ultimately, this is a time for creating but maybe not so much for sharing. While artists can’t perform live or tour, we can focus our energy on writing, recording and recontextualizing what we want our artistic output to be.”

It is Yonker’s hope that a new generation of artists will emerge to fill the void left by the Mammal Gallery and other venues forced to close during the pandemic. The Mammal Gallery was always just one vessel for local artists, he says, and if there are no spaces left to perform, they’ll just have to create their own.

“DIY venues come and go, it’s a constant cycle,” he says. “They either die or they become more of a viable business model and basically go ‘legit’ — Mammal almost went legit but it just didn’t work out. But maybe it’s time for us to get out of the way and let some younger kids have their turn to do their thing in local music. Discomfort is part of progress because without discomfort, there’s no need to change things.”

One such organization Yonker sees particular promise in is Southern Fried Queer Pride (SFQP), a Black, queer and trans arts and advocacy organization based in Atlanta. The organization hosts annual festivals and events at local venues, as well as community conversations and marches related to civil rights. SFQP is currently fundraising to purchase a permanent space of its own somewhere in the city, and has nearly met its goal of $100,000.