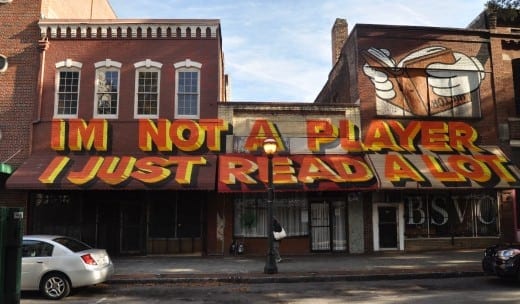 Elizabeth Jarrett and Kris Pilcher stand in a cavernous, 70-foot-long room of a run-down 100-year-old building in South Downtown. Today it is pitch black (electricity was never wired to the third floor), the windows are boarded up and the original hardwood floor is covered in pigeon poop. But the artists, also business partners, intend to convert it into a loft apartment for Jarrett. With only a handful of helpers, they are slowly rehabbing all 28,000 square feet of 98 Broad Street, now the home of Downtown Players Club, a fledgling multi-use incubation and experimentation space for performance artists.

“Our goal is to be a sort of clubhouse for creatives, and everyone is productive at different times,” says Pilcher, 33. “I can imagine a 24-hour artistic hub. I would love to see a 3 a.m. performance piece, then carry on with a 4 a.m. philosophy discussion.”

Since July, they have made steady progress, converting the reception area of a former dentist’s office on the first floor into a box office, and a raw loft on the second floor into Pilcher’s apartment and a performance space, which hosted its first performance last weekend.

Around the corner on Forsyth Street, longtime Atlanta arts collective Eyedrum is also buzzing with activity. Eighteen months ago the nonprofit signed a seven-year lease at a dollar a year with LAZ parking company for a string of abandoned storefronts. Volunteers have slowly converted buildings that were once full of junk (including thousands of music instrument cases) into a functioning art gallery and performance space, but construction seems to constantly be in progress.

Today, two musician-turned-carpenters are demoing a back room to build studio space. On the roof, one of the building’s best assets, setup is underway for a wedding; Eyedrum’s first. Future plans include demolishing several walls to expand the performance space and building a community garden on the roof. South Broad Street was once a thriving commercial district.

The Downtown Players Club and Eyedrum have joined a handful of ventures that have, in recent years, moved into this neglected pocket of Atlanta, once a thriving commercial district. Sandwiched between federal buildings and the Capitol, and cut off from the rest of the city by the Five Points MARTA Station, South Broad Street seems largely forgotten. Despite 12-foot sidewalks, historic architecture and a series colorful murals commissioned by Elevate in 2012 that have brightened the neighborhood, the area feels bereft: Most of the buildings in the quarter have fallen into serious disrepair since the area’s heyday in the 1950s. During the day, the former storefronts are shuttered by locked gates, and homeless people and transients drift through. Mammal Gallery was the first art space on the street. Mural by Sarah Emerson. (Photo by Allie Goolrick.)

But in the last few years, the cheap rent has attracted a group of artists and musicians looking for affordable space. Since then, what started as a loose collective of urban pioneers working on individual projects has morphed into a fledgling grassroots movement, replete with a neighborhood group called the South Downtown Initiative.

Mammal Gallery was one of the first to rent space on South Broad. Local musicians Chris Yonker, Dan Dewberry and Brian Egan opened the former nightclub in 2012 and now host regular art and music shows. Soon after Mammal opened, musicians Danny Bailey and Jared Pepper leased an old liquor store across the street, which they are slowly transforming into a mixed-use recording and performance space, cheekily named Broad Street Visitors Center. Other ventures, such as the do-it-yourself media incubator Murmur (think zines), are slowly settling in on the block as well.

Ask various players what they envision for the entire area in the future and you’ll get a mixed bag of answers, but the general idea is to create a buzzing homegrown arts corridor where you can find all sorts of music, art, studio and rehearsal space and a whole lot of really out-of-the-box thinking.

For several of the ventures, the goal is to create a home for the kinds of art that don’t always attract the biggest crowds. “A lot of what we do is by its nature not going to attract a big audience,” says Eyedrum’s executive director Priscilla Smith. “But it’s really important work. I totally believe that art doesn’t have to justify itself. I don’t think art has to serve a purpose. If it’s good for the community, that’s great.”

At present, the district feels like an Atlanta version of New York’s bohemian Alphabet City (i.e., Rent). In other words, a charming avant-garde scene — if you can deal with no heat, bare-bones electricity and living (at least what feels like) a little bit dangerously.

“There’s a lot of infrastructure issues to deal with, but we have an incredible community of artists and doers who want to create something that can be shared by the Atlanta community and beyond,” says Jarrett, 26.

The artists in the district aren’t embarking on the project entirely on their own. Several of the South Downtown ventures are getting a much-needed hand from the Goat Farm through a new program called Beacons, which offers aid and advice to artists who are working to revivify communities. The program helped Pilcher and Jarrett negotiate an affordable lease and has offered instruction on navigating business concerns. Beacons has also supplied work crews to help with renovations for several of the buildings in the district and encouraged construction companies to donate or discount building materials. “Beacons is really making a push for the street to turn out in a good way,” says Bailey of Broad Street Visitors Center. “And they’re really trying to make it move along and turn out quicker then it probably would have without their influence.”

The group faces other challenges. South Broad and the surrounding blocks have long had a reputation for being under-policed and attracting illegal activity. The district’s close proximity to the Five Points MARTA station has made South Broad a convenient hangout, though most of the people who gather don’t live there. On a recent night, Jarrett, Pilcher and I are sitting in the lobby of 98 Broad Street. Outside, a group has gathered on the sidewalk at dusk, drinking shots, smoking pot, carousing and playing music. Across the street, homeless people congregate in front of Mammal.

The young artists on South Broad say they want to keep the neighborhood inclusive and are adamant about not wanting to push anyone out. Figuring out how to engage with the “locals” is a frequent topic of discussion. Both Eyedrum and Downtown Players Club have tried to employ homeless people for odd jobs when they can.

“Broad Street has a deep history and…many groups of people who have created their own subculture on that street,” says Murmur’s founder, Amanda Mills. “I think that a lot of issues surrounding drug use, street life, class inequality and racism are constantly playing out on that street and need to be explored and supported even more.”

Though walking to events at night can feel a little scary, Jarrett and Pilcher, two of the few people who live on the block, are adamant that they feel safe and are getting a fair amount of support and encouragement from Broad Street’s regulars.

“We’ve kind of had to learn to carefully co-exist,” says Jarrett. “We definitely have people that look out for us here and it is nice. They say ‘we see what you’re doing and we respect you.’” The South Downtown Initiative is pushing to drum up much-needed support from the city. They say they’ve had some interest, especially from Tim Keane, the new commissioner of the Department of Planning and Community Development, who just took the position in July. Earlier this year, Jarrett met with Keane to discuss a partnership. Though there are no formal plans in place yet, Keane says he wants to help facilitate the effort in South Downtown.

One of the biggest concerns for the artists in South Downtown is eventually being priced out of the area in which they have so much sweat equity. Nearby development projects — Mercedes Benz Stadium (which will open in 2017 as the new home of the Atlanta Falcons), plans for a new Hard Rock Hotel (opening in March) and the redevelopment of Underground — could speed gentrification. An opening at Eyedrum.

The story is a common one: Arts organizations and nonprofits are often pioneers in low-value markets, and their presence and improvements attract others. Eyedrum, which had occupied a warehouse in the Old Fourth Ward for a decade, lost its lease in 2011 because of rising property values.

“Honestly, we’ve all gone into other neighborhoods and created different things and then had those neighborhoods skyrocket up and then we get kicked out,” says Jarrett. “So this is really an experiment in how to make this sustainable arts district where it’s inclusive and community centered.”

South Downtown seems to have all the right ingredients for a homegrown arts district: urban scale, buildings with character, a group of energetic pioneers. But Jarrett says they realize that to do something that will last in the long term, they will need the City of Atlanta to take an interest and lend a hand, whether that means funding for the arts or historic preservation, helping navigate tricky administrative details like city permits, working with police to curb crime or simply helping to alleviate parking woes.

The artists on South Broad believe that what they are doing is worth the city’s attention. “South Downtown is one of the most interesting and history-rich parts of the city,” Jarrett says. “There’s an opportunity here to showcase and capture Atlanta in a district that will celebrate our culture.

“If the city was smart, it would pay attention to what is going on here.”