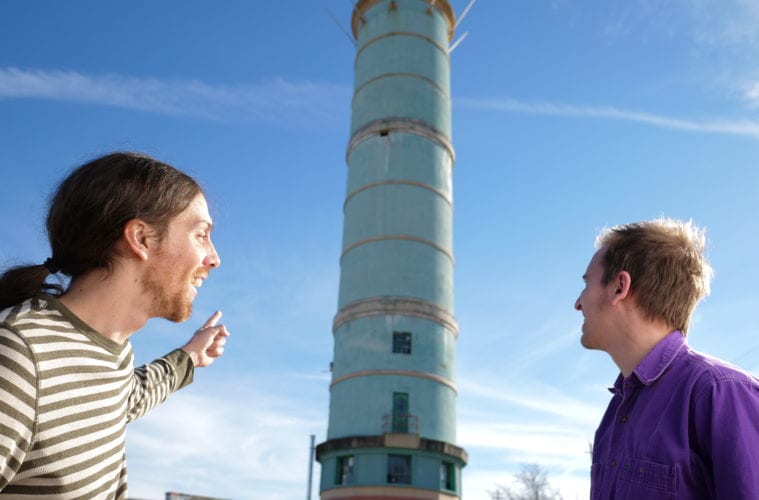 Return of the Mammal Gallery (Photos by Brock Scott)

Mammal Gallery will serve as the anchor of West End development

Mammal Gallery cofounder Chris Yonker plans to reopen the DIY event venue that was forced out of its former home in south downtown after a deadly fire last year. The new space will be inside the iconic water tower at The MET off Metropolitan Parkway that was purchased by developers Carter & Associates for $58 million last June.

With the Mammal Gallery serving as the mainstay tenant, Carter aims to transform the massive property near the West End MARTA station into a space for artists and creatives to live and work. The same company is behind the revival of Summerhill’s commercial corridor and development around the Georgia State Stadium, which is a long-term work in progress.

“It was important to us in thinking about an anchor for the property to be someone who does value the neighborhood and values being part of the community and being part of the arts and culture of Atlanta,” said David Nelson, a Carter executive vice president.

Mammal Gallery comes out the other side with not only the iconic tower but a 6,100-square-foot portion of the warehouse adjacent to it, which will serve as a music and performing arts venue to feature a wide range of programming. The venue is planned to be fully operational by March 2020, and Yonker told Atlanta magazine he estimates the total cost of the project to be $500,000–$750,000. Mammal Gallery is doing a first round of fundraising, with the initial goal being $75,000. The MET was built in the early 1900s by Asa Candler, cofounder of the Coca-Cola Company, to house cotton. The space is now home to more than 140 tenants, including artist and media studios, designers, retail space and storage. Nelson says much of the property that was used for storage space was relocated to make way for more artists, entrepreneurs and businesses. Carter says it wants The MET to have a sense of community.

“You can turn those spaces over into being something that’s more of thriving businesses,” Nelson said. “What we thought this 1 million-square-feet space could become is a beacon within Atlanta for a complete diversity of uses and people.”

Mammal Gallery’s new home is two miles from its original location on Broad Street. Located across from Adair Park to the south sits The Bakery, another DIY music and arts venue, where many Mammal Gallery programs continued after the space’s South Downtown location shuttered. The Bakery has since grown into a thriving and successful organization in its own right, and Yonker sees its close proximity as an opportunity for collaboration rather than competition.

The developments of the West End have raised brows of a few individuals, many of whom are wary of the long-term effects gentrification has on the neighborhood. Erika None, a multimedia artist and entrepreneur who goes by TK, previously lived in the West End near The MET. She has prepared a statement on behalf of a few concerned locals that asks the West End newcomers to proceed with caution, but gives nod to the fact that Mammal Gallery could create an accessible platform for existing businesses.

“In the same ways that there could be negative byproducts of this move, there can also be positive,” the statement reads. “It’s important that outsiders coming in create a relationship and collaborative efforts with the businesses and residents already within that community.”

The statement notes the conversation of West End development goes beyond that of Mammal Gallery moving in. Some nearby residents are concerned that the development of The MET will drive up housing prices in the neighborhood and cause displacement. Additionally, the letter asks that those moving in respect the history and culture of the area.

“It’s important that we acknowledge that many of the economic structures in place have a long history intrinsically linked to the oppressive nuances rooted in classism, racism and sexism,” the statement reads. “It is non-negotiable that organizations like Mammal and any developers moving into already established communities anywhere, move with extreme consideration and mindfulness.” As an artist himself, Yonker is aware that a wave of artists moving into a neighborhood often represents the first step of gentrification.

“The age-old story is that arts organizations are the first wave of gentrification,” Yonker said. “They make the area cool and attract people, but then they get kicked out because the developer can make more money from the building. I think bringing on the Mammal Gallery as the anchor tenant says a lot about Carter’s vision for The MET, and that’s why we have a 10-year lease.”

The Mammal Gallery team was hesitant to work with a big property developer again after the previous experience with corporate owners of the gallery’s previous space, but Yonker said Carter’s transparency and intentions to maintain the arts community of the West End appear valid.

“Saying that the Mammal Gallery will transform The MET into a vibrant epicenter for artists ignores the fact that it always has been one,” Yonker said. “We’ve all been hanging out in this area for more than 10 years, and now we just want to put on shows and events here that people can be happy about. We don’t want to change the West End or displace anyone who lives here.”

Mitch Cherry, artist and ocean conservationist, previously resided in the iconic water tower — for the last 20 years, in fact. When Cherry originally leased the water tower and the warehouse adjacent to it in 1999, he had a similar vision to Mammal Gallery as far as creating a music and arts venue on the property. He is involved in the current project, acting as a mentor and assisting in programming environmentally sustainable bar and venue practices to produce less waste.

“It was actually one of my plans back in the day to do a venue,” Cherry said. “I am older now and lost that dream, but I’m thrilled that the whole thing has come back. These guys are going to do what they do, and I’m lucky to get to be part of it without shouldering all the responsibilities.” The blue water tower at The MET (Photo by Brock Scott)

Cherry has lived in Atlanta his entire life and has been involved in the music and arts scene for more than 25 years. He’s seen the city undergo many changes but sees development as a part of the circle of life. He was the first to make the water tower a residence.

“Personally, I’m not worried about gentrification, because we’ve been through this already,” Cherry said. “This could be something completely different. I don’t think people realize how cool this could be. I think that Carter really listens and has ideas that align with ideas that we’ve had.”

Mammal Gallery has already met with various individuals in the area, and the team hopes to find ways to collaborate with the community. The organization encourages anyone with concerns about gentrification and beyond to reach out.

“The only way to have some positive impact on development is to be a part of the direction, and we want to include the community in that conversation,” Yonker said.

Carter is aware of concerns in the community and will continue to host public meetings and events throughout the year, rotating across its Atlanta properties. The next meeting for The MET will be the Adair Park Porch Party in spring/summer.