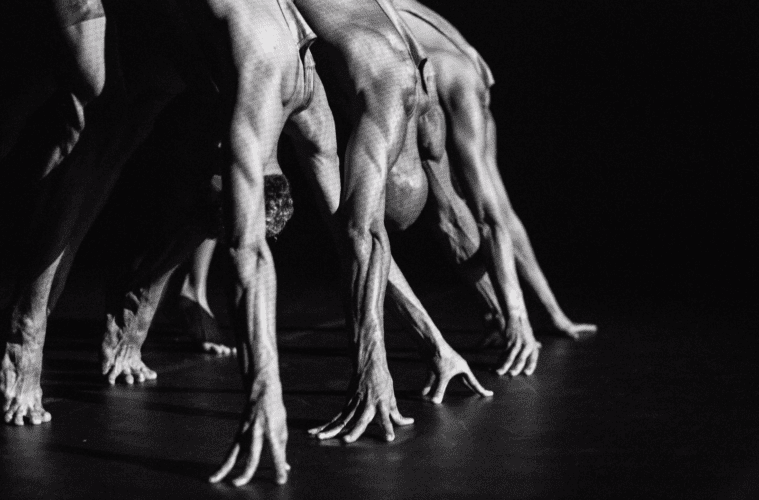 Earlier this year, the Georgia Trust for Historic Preservation put the Historic Rhodes Theatre on its “Places in Peril” list. The theater was originally part of a group of three buildings, designed in 1937 by Ivey and Crook, which made up Atlanta’s first strip mall. With only the theater building remaining from this development, and no plans for renovation after many years of neglect, the Rhodes Theatre was placed on the list to encourage awareness, preservation and revitalization. In recent years, local presenters, such as Backside of the Tent and Tanz Farm (a partnership of Lauri Stallings’ group glo and the Goat Farm Arts Center) have occasionally converted the raw space into a temporary performance venue. This past weekend, in addition to serving as the U.S. premiere of Shamel Pitts’ BLACK HOLE, this evening of dance was also a significant coming out (again) party for the space.

BLACK HOLE: Trilogy and Triathlon is the third work in Pitts’ Black series, which began in 2015 while Pitts was still a member of Batsheva Dance Company, with a solo called BLACK BOX — Little Black Book of Red. This was followed by the duet BLACK VELVET, which Pitts and Mirelle Martins performed in Atlanta a year ago.

Last Thursday, the stage appeared empty save a coiled clump of black plastic sheeting, which served as a base for light projection. As hypnotic as the lights were, like bioluminescent particles swimming and swarming, the theater was of more immediate interest. The room was a large, empty shell with the impressions of its former brilliance, the shadows of decorative plaster and reliefs still visible on the concrete and brick walls. Fresh sand had been poured to create a floor. Risers and a stage had been constructed in the void of the space, making a simple black box of tall black curtains. The house lights were dim, or maybe nonexistent as the projection on the stage provided ambient light for the audience to find a seat. The mood was special, mixing the excitement of what almost felt like trespassing with the awe of this dilapidated treasure, previously unknown to many.

A droning sound brought the focus back to the stage, marking the start of the show. Movement of the tiny lights picked up speed and intensity and made the plastic tarp appear as if it were moving too. Or was it actually moving? Soon a body appeared from underneath the material, crawling into the light.

For a moment, this opening image of Pitts, his back to the audience, sinewy torso emerging from a large skirt of fabric, appeared as an inverse image to last year’s opening of BLACK VELVET in which Martins began the piece standing on a ladder, towering over the audience in a long black skirt. In keeping with BLACK HOLE’s subtitle, Trilogy and Triathlon, Pitts was not alone for long, as Martins and Tushrik Fredericks snaked out of the fabric too, matching Pitts on either side in the first of many triangles. Luminous in their matching, flesh-like unitards, chests exposed, they interlocked their heads over each other’s shoulders and stood up en masse, rising, in effect, as one powerful mythic animal, spirit or deity.

Images and tableaux throughout the show did in fact conjure many different traditions of the gods and God. Almost as soon as the performers stood, they ran in place, each dancer pumping one arm and leg furiously like Olympians with a medal in sight. Other configurations of their three bodies appeared like some new many-limbed Hindu god. There were even a few instances near the end when arms reached out into a familiar cross, both alone and in connection with each other, in a gesture of sacrifice and immense power. For another split second, they melted into an apotheosis pose, reminiscent of George Balanchine’s Apollo.

Even with such a minimal set, consisting of just the black tarp, they evoked a complete world. In one spectacular sequence set to a driving rhythm, they slipped back under the fabric, their bodies punching it from the inside like three cats fighting in a bag. When the chaos died down, they were reborn as a new totem of three heads under a shawl. Moving as one again, they traversed the stage in a journey that ended with perhaps the most compelling image of the night: Martins in profile, with the tarp draped over her shoulders as a cape, and Pitts and Fredericks underneath it, stretching it in a dramatic train across the stage. The lights reflected off of it in waves as she stood still.

Then in one sharp, powerful sweep, she pulled the tarp back and laid the two men bare. While Pitts and Fredericks were clearly the more virtuoso and nuanced movers, there was still no way to deny Martins’ sheer power as a performer. It continued on until the end, when she stood upstage center and drew the men to either side of her from her outstretched arms. They slid out of their embrace, and one-by-one drifted and slipped off the stage through the back curtain, finally swallowed by a radiating ball of black. In a way, the trio seemed to disappear into the atmosphere only to become a part of everyone who experienced the performance. As an end cap to Pitts’ Black series, BLACK HOLE was both a unique and familiar odyssey: simultaneously unifying and obliterating, becoming and unbecoming, on a path that felt more circular than linear.

For a show that sought to bring about a synergy between past, present and future, placing the production inside the imperiled Rhodes Theatre was a feat of imaginative curating and sheer tenacity from Lauri Stallings, Rick Carvlin and Anthony Harper. As they continue to build support around the revival of the Rhodes Theatre and seek to program other local artists there, one can only hope that the thriving midtown arts district will show up to help reimagine this promising performance space.