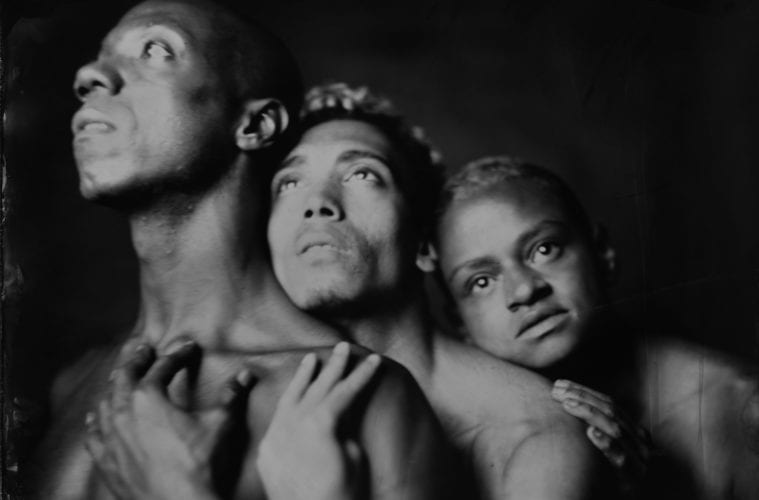 Q&A: Shamel Pitts on the U.S. premiere of BLACK HOLE at the Rhodes Theatre

In scientific terms, a black hole is a region of space where the gravitational pull is so strong that nothing can escape, not even light.

On April 4–6, a sort of parallel cosmic phenomenon will land on the stage of the Historic Rhodes Theatre as part of Tanz Farm’s performance anthology: BLACK HOLE — Trilogy and Triathlon. A joint production between The Goat Farm Arts Center and Lauri Stallings’ performance group glo, the series welcomes back choreographer Shamel Pitts after last season’s provocative duet, BLACK VELVET — Architectures and Archetypes.

Created in 2018 in Atlanta, Pittsburgh and Berlin, BLACK HOLE is the third creation in Pitts’ “Black series,” which began with a solo work titled BLACK BOX — Little Black Book of Red. For this iteration, performers Mirelle Martins (his partner from BLACK VELVET) and Tushrik Fredericks will join Pitts onstage. As with BLACK VELVET, the choreography comes out of Pitts’ extensive movement background in Gaga technique with highly physical, full-exertion phrases that are often punctuated by startling images and inventive plays with simple set pieces.

BLACK VELVET explored a sense of androgyny between Martins and Pitts that was at once familiar yet somehow still unknown. Conceptually, BLACK HOLE sets out to unite a cast of three black artists, of Africa and the African diaspora, in a hopeful and celebratory trinity.

ARTS ATL spoke with Pitts about the evocative title, the creative process that began in Atlanta last spring, the work’s relationship to Afrofuturism and what audiences can expect of this U.S. premiere.

ARTS ATL: What was the creation process like for BLACK HOLE?

Shamel Pitts: The first iterations, or dreams, of BLACK HOLE happened at the Goat Farm, through Tanz Farm and with glo and Lauri Stallings. As Mirelle and I prepared for BLACK VELVET, we began our first rehearsals into BLACK HOLE — so it feels very full circle to have the U.S. premiere here. Tushrik Fredericks is from Johannesburg, South Africa, and he lived for several years in New York, dancing with Sidra Bell. I also danced with Sidra before I left to go to Batsheva Dance Company. And before I even met Tushrik through Sidra, I remember seeing pictures of me and then realizing it was Tushrik. So I felt a similarity before I knew him. When he took my Gaga classes, I got to know his body as different than mine and fell in love with him as a mover. I invited him to Pittsburgh and then to Berlin to be a part of the BLACK HOLE process, and something strong happened between the three of us. This sort of trinity formed.

ARTS ATL: You developed such an intimate relationship with Mirelle for BLACK VELVET. Have the working dynamics of this trio been different, or changed the two of you?

Pitts: BLACK VELVET was very much 50/50 in terms of how Mirelle and I met and how we listened to each other, creating space to take care of each other and sharing our taking-care with others. Adding Tushrik added more variety and lightness. Mirelle and I are intense, and now that Tush is a part of it, I am learning a different side of Mirelle — she is so funny. And of course she is so powerful too, but now that there are three, we are like three different satellites that connect to create a big entity or one powerful force.

Lauri [Stallings] — she is a force too. It was not easy to bring this here a year later. There were obstacles in terms of schedules and visas and the venue and all of these technical things that can get in the way. But Lauri and I and Rick [Carvlin] are dreamers, so we figured it out.

ARTS ATL: The show takes its title from the scientific term, and part of your description reads, “BLACK HOLE proposes to engage an audience in a way that it condenses the experience [deeply] into a [colorfully] hypnotic journey, without exit.” Is the expression “no exit” meant in a hopeful and eternal way?

Pitts: Conceptually, a black hole is this region of space-time that has the strongest gravitational force, and anything in proximity in space gets absorbed into its core. Something about that inspired me artistically and in terms of magic — how can I create a performative experience where we collect all of our beings into this experience? I know “without exit” sounds morbid, but it is more like these holes don’t have a bottom. I think somehow this is my most softly intense work, the most powerful and the most colorful of the three. There is something that lends itself to the infinite, which is, ultimately, space.

ARTS ATL: How will music or sound be incorporated?

Pitts: I worked very closely with Sivan Jacobovitz on the original parts of the score. He composed a lot of the music in this work, and we created this odyssey inspired by big music, in terms of volume rather than instrumentation. There is an epic, gospel element to it. The full score is as diverse as BLACK VELVET was but more spacious and less industrial. The music is like the journey — it allows space, but it also really creates and powers the space. Sivan also takes Gaga classes, so we have a similar understanding of movement. He saw BLACK VELVET before we met, and so our process was fluid and efficient. The sound score takes into account that it is part of a trilogy, so there is connectivity and continuity with the two other works. There are also cameos from Frank Ocean and Nina Simone and a cameo from Sun Ra. They are all there.

ARTS ATL: Speaking of Sun Ra, do you consider yourself an Afrofuturist? [Afrofuturism is a philosophical and aesthetic movement in which artists of the African diaspora have connected their history to a newly envisioned future through technology and science fiction. Sun Ra is an American musician and poet who cowrote and composed for the seminal Afrofuturist film Space is the Place, released in 1974.]

Pitts: Afrofuturism is something I am passionate about researching and sharing, and I do think the work is a large leap for Afrofuturism. We are all of African descent via Brooklyn, Brazil and South Africa, and we all have such different stories and histories and journeys to where we are going. BLACK HOLE is my attempt to create another future that is unseen or unspoken or as yet unshared. We are dealing with the dimension of time and how things travel further than the moment and before the moment, so I don’t know about labeling myself, but the work is definitely Afrofuturistic.