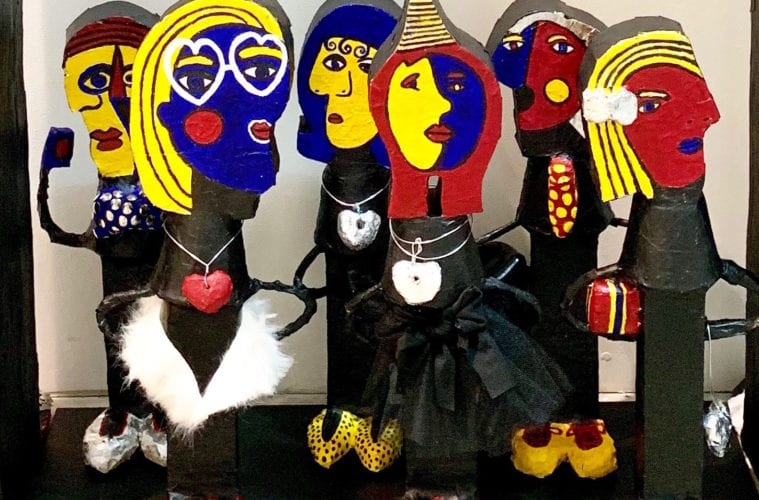 Detail: The Birthday Shrine by Abigail Chase Miller. See it at Besharat Gallery. (All images courtesy of the artist)

When Abigail Chase Miller chased her master’s degree in sculpture at SCAD Atlanta, she was an older student. She already had an associate’s degree from the Parsons School of Design in New York City and a B.F.A. from the Massachusetts College of Art and Design (MassArt) in Boston.

“It was not about technique, which I already knew,” she says. “It was about concept.” 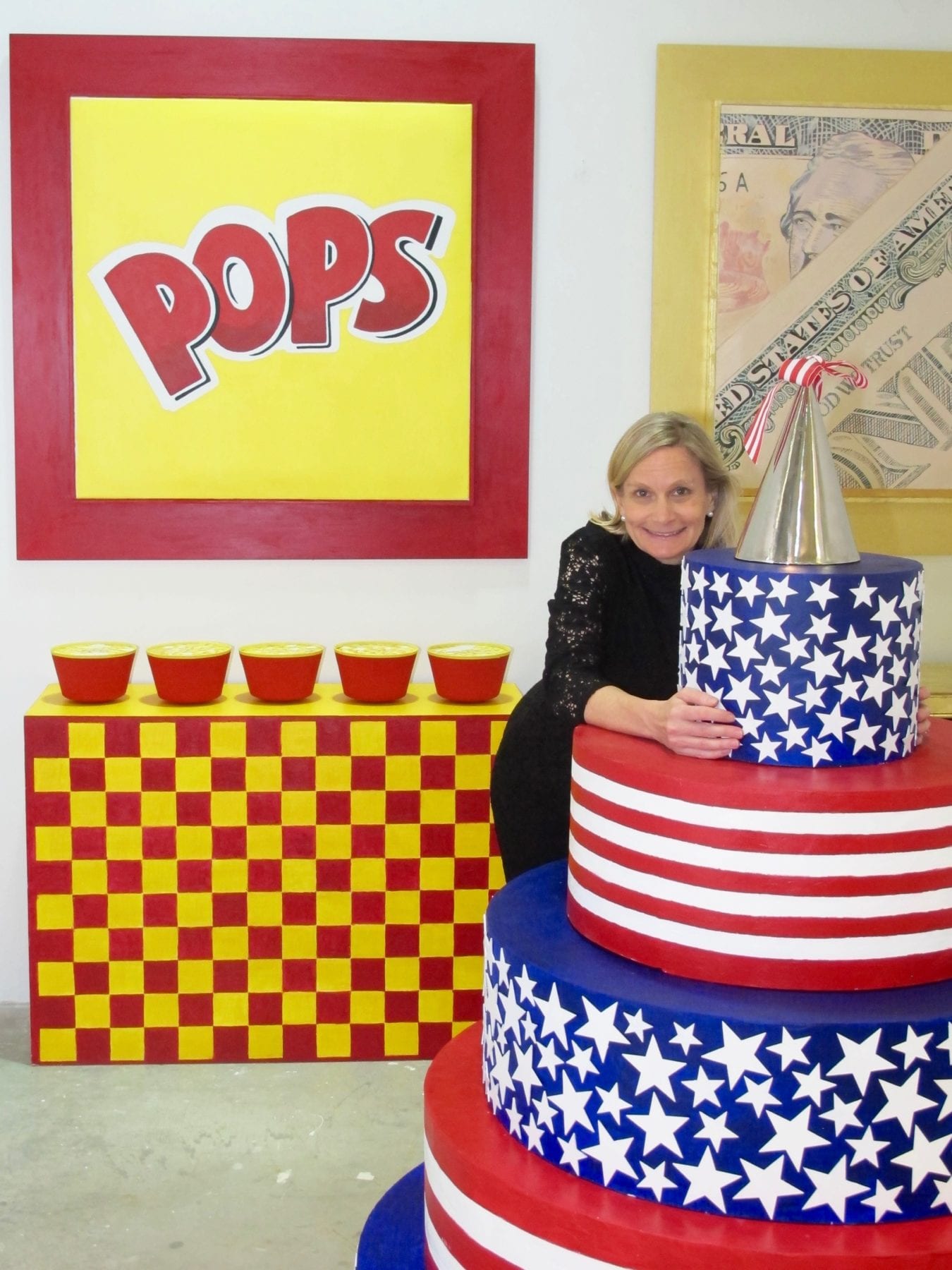 The artist and The Pops Shrine

“You’re trying to find your driver,” her SCAD mentor told her. “She calls it the burning thing inside my mind, the nitty gritty of why human beings do what they do.”

It clicked for her on a grocery-store visit, when she noticed all the colorfully packaged junk food in the front of the store and the healthier options farther from the door.

“This is human patterning,” she says. “In society we sugarcoat things and numb out on distraction. The instant high of nicotine. The instant gratification of a Big Mac. We numb out on things that don’t matter, and they become important to us.”

Her latest work takes shape in the multimedia solo exhibition Sugar-Coated — her first in Atlanta — opening Friday at Besharat Gallery during the Castleberry Hill 2nd Friday Art Stroll. Sugar-Coated then runs Monday through Saturday until May 8 by appointment (call 404-838-8860). 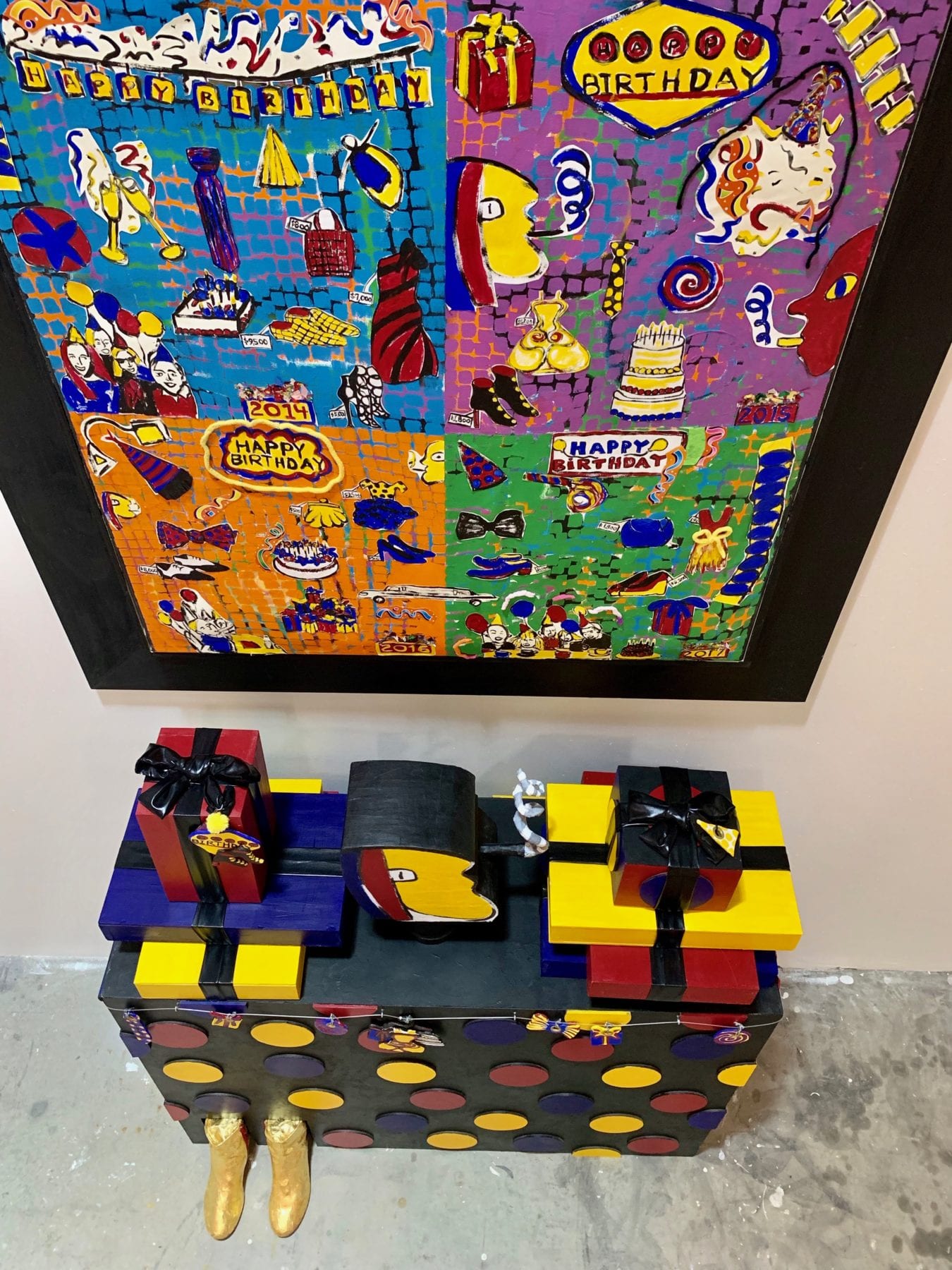 Detail: A different view of The Birthday Shrine

Visitors will see “conversation shrines” from Miller’s SCAD studies and paintings from her pre-SCAD days. The shrines are meant to make us think about the sociological, psychological, emotional and historical impact of how we live our everyday lives.

They deal with Sugar Pops cereal, Miller’s childhood obsession; money and debt; Native Americans and Donald Trump; and another Miller obsession — holding increasingly elaborate birthday parties as daughter Caroline and son Thomas grew up. It was how she numbed herself, she says.

Miller says her work has been influenced by linguistic patterning, American philosopher Noam Chomsky, the book Debt: The First 5,000 Years by anthropological theorist David Graeber and Ernest Hemingway’s The Sun Also Rises, among other sources.

Now 53, Miller grew up in Manhattan, less than a block from the Metropolitan Museum of Art. She met husband Jack while at MassArt, and, on one particularly snowy day while very pregnant, she decided she’d had it with New England. The family (which now includes cats Baxter, Katie and Annie) moved to Tampa, Florida, and then, about 2.5 years ago, to Midtown.

Atlanta agrees with her. “The New York art scene is cutthroat,” she says. “The art scene in Tampa is dead. I feel like the Atlanta art scene is perfect for me.”