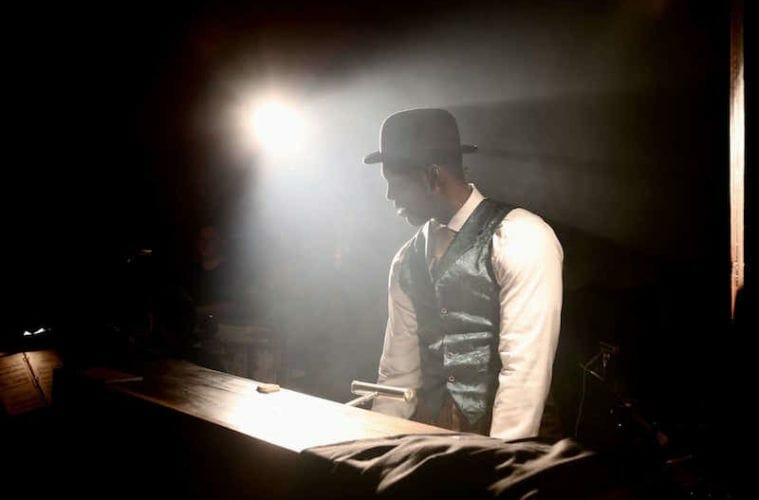 BIPOC artists claim that extra uses of the N-word were added to the script of "Ragtime" in a 2019 production. It featured Marcus Terrell Smith as Coalhouse Walker Jr. (Photo by BreeAnne Clowdus)

The Black Lives Matter movement continues to affect major cities as institutions large and small examine their racial policies and practices. Some of the nation’s most popular entities — from the NFL to Walmart — have announced changes, and American theater is not exempt from self-reflection. The We See You White American Theatre movement has shaken theater communities from Broadway to Atlanta. And in the past several weeks, artists have shared their experiences with racism at some of the most prestigious theaters across the country. In Chicago, it started with Second City; in New York, it was Broadway; and in Atlanta, it was Serenbe Playhouse. Terrence Smith (in 2019’s “Hair”) worked at Serenbe for five seasons. He says he was spat on during the Civil War musical “Shenandoah.” (Photo by BreeAnne Clowdus)

Serenbe Playhouse, about 24 miles from downtown Atlanta in Chattahoochee Hills,  launched the idyllic Serenbe community into national prominence under the leadership of  founder and former artistic director Brian Clowdus. With stunning marketing photography by his sister, BreeAnne Clowdus, the Playhouse often was lauded for its immersive outdoor experiences. The company made it snow during The Snow Queen, landed a helicopter during Miss Saigon and gave the illusion of sinking a ship for Titanic. The latter is an appropriate metaphor for the controversy that has surrounded the Playhouse in recent weeks.

On June 8, Atlanta-based singer, actor and educator Lilliangina Quiñones, who identifies as Afro-Latina, posted a list of microagressions she experienced while working on Serenbe’s Ragtime in 2019. This included — but was not limited to — Clowdus adding extra uses of the N-word to the script and centering the piece around the experiences of the white women characters instead of the Black characters as written.

Actor Terrence Smith, who is Black, shared a detailed account of racism he experienced there in the past five years, including having to wear a culturally insensitive costume during The Secret Garden (2015) and having a child actor spit on him during Shenandoah (2019). During the 2015 production of Carousel, apprentices took turns standing on a corner spinning a carnival sign to direct visitors to the site. Smith says that when he expressed discomfort with the task, then-managing director Gretchen Butler “proceeded to start whistling at me and beckoning me to pick up the sign like a dog. ‘Here Terry, here boy! Pick up your sign!’”

Butler, now the managing director at Theatrical Outfit, says she doesn’t remember the incident Smith describes but doesn’t deny the truth of his memory of it.

“Everyone was in some type of abusive situation,” Smith said. “I didn’t feel comfortable saying anything because you didn’t want things to get back to Brian. He told apprentice company members that if we didn’t do what [staff members] asked, they would be blacklisted and never work in Atlanta. If you complied, you would get a good role and be able to work.” Tara Moses directed “The True Story of Pocahontas” in 2019, and said in a lengthy Facebook post: “I cannot be complicit in behavior that is not only unacceptable, but dangerous.”

Tara Moses, who directed The True Story of Pocahontas in 2019, describes her experience at Serenbe as unusual from the start. She says that numerous white staff members commented that Maddie Easley, the show’s title character, looked too white to be Native American, so her image wasn’t used in marketing materials the same way other actors had been featured in show art. During rehearsals, Moses expressed concerns about the safety of the tree built for Pocahontas to climb and about setting audience expectations through culturally conscious marketing. She says that Pocohontas production director Joel Coady told her that she could have safety rails or audience development but not both. She chose the safety of her actor.

“I wanted to center on Native women and stay as far away from Disney as possible,” said Moses, a citizen of the Seminole Nation of Oklahoma and also the Muscogee (Creek) Nation. “I had multiple discussions about how they needed to manage audience expectations because the actual story of Pocahontas is not appropriate for children.”

Moses says that she contacted her representative at the Stage Directors and Choreographers Society and filed a complaint with the Serenbe Institute expressing her safety concerns and Coady’s alleged anger toward her. Moses says that Jennifer Bauer-Lyons, executive director of Serenbe Institute, told her not to say anything about what she’d experienced to anyone on staff or any members of the Pocahontas creative team. She left before opening night. The production ultimately opened late and closed early. Easley (Pocohontas) left the show when she broke her ankle and ticket sales were below projections. Coady, who’d spent five years in various Playhouse jobs, was promoted to associate artistic director as Clowdus was leaving, about six months later.

About Pocahontas, Bauer–Lyons wrote in an email, “That claim was thoroughly investigated by our third-party HR consultant who was hired by the [Serenbe Institute] board prior to my arrival as executive director. While I cannot share the outcome of that claim, I do recognize the frustration that Tara must feel not knowing what took place after her contract was finished.”

Like a tidal wave, past employees, apprentices, performers, directors and designers began sharing their experiences of unsafe working conditions and racial insensitivity at Serenbe Playhouse. Almost all also said that it was common for people to be unfriended and blocked on social media by Clowdus and other staff members if they complained. “The Serenbe Playhouse board was very protective of Brian [Clowdus] . . . so part of the problem was that we didn’t know what was going on internally,” says Deborah Griffin, chair of the Serenbe Institute board.

On June 15, Serenbe Institute released a Facebook statement saying it had “suspended all operations, laid off the current staff and [would] begin the work to rebuild a new, equitable, welcoming and diverse Playhouse.”

ArtsATL reviewed 40 pages of statements, received emails and Facebook messages from individuals who requested anonymity, and spoke to more than a dozen people for this article. In addition to the Facebook posts, ArtsATL reached out to other artists and former administrative staff members who had worked at Serenbe Playhouse.

Frequent performer Shannon McCarren, who is white, says she never saw Clowdus say or do anything racist, but she’s not surprised by the testimonies from BIPOC actors. She regretfully recalled an instance during the photo shoot for Titanic in which she and a group of white actors started singing “Wade in the Water.” When she noticed the Black actors looking uncomfortable and not singing along, she says, she stopped.

Serenbe favorite India Tyree, who is Black, says that she never experienced racism at the Playhouse, but that she had heard stories. In an email she wrote: “I was once very proud to be on the billboards and posters for Serenbe, especially as a Black woman (photo of me as Sebastian from Little Mermaid). But now, I cannot and do not have pride in that — being that my BIPOC friends had to go through such disturbing, unsettling, unnecessary moments of racism working for the company.”

When asked to comment for this story, Brian Clowdus chose to send a statement regarding the social media posts. In reads, in part: “I would never seek to invalidate or diminish the genuine emotions expressed in these posts, but they have taken me by surprise. . . . To anyone who feels that I let them down during that time, I sincerely and humbly apologize. (His full statement follows this story.)

Many people assumed that the allegations of racism were the only catalyst for suspending operations, but Deborah Griffin, chair of the Serenbe Institute board for the past year, says that Serenbe Playhouse had not been financially viable in two years. The Serenbe Institute holds the 501(c)(3) for the Playhouse, Terminus Modern Ballet Theatre, AIR Serenbe and the South Fulton Area Initiative. According to the Institute’s 2018 IRS Form 990, Serenbe Playhouse had an annual operating budget of almost $1.3 million. Griffin believes those numbers were inflated.

“The Serenbe Playhouse board was very protective of Brian and his vision, so part of the problem was that we didn’t know what was going on internally, and we were often not told the truth,” Griffin says. “They hid liabilities from us that we didn’t know about . . . I don’t know accurate numbers to tell you.”

Clowdus left his role as founding artistic director in November 2019 to focus on his site-specific, immersive theater company, Brian Clowdus Experiences. At the time he was to remain on the Playhouse’s board of directors. In Quiñones’ Facebook post, she says that the racist culture continued in Clowdus’ for-profit venture during a production of A Christmas Carol, in which an actor read Uncle Remus stories in blackface. Brian Clowdus led Serenbe Playhouse as founding artistic director for 10 years. Also an actor, he played the Emcee in the company’s 2017 staging of “Cabaret.” (Photo by BreeAnne Clowdus)

Though the allegedly oppressive culture at Serenbe Playhouse grew under Clowdus’ leadership, he’s not the only one implicated. According to Griffin, however, Moses’ complaint was the only human resources complaint in the theater’s history that mentioned race. When the Serenbe Institute board recently reviewed Playhouse records, there was no paperwork regarding any HR complaints.

Another question remains. If the theater had remained financially solvent, would the Institute have shuttered operations over racism? Though many in the Atlanta theater community have described the culture there as an open secret, what isn’t a secret is that the theater generated a lot of revenue for the Serenbe community by attracting visitors.

Bauer-Lyons is now working with the Institute board to rebuild the Playhouse with a focus on employing more diverse playwrights and a diverse staff. They are working with two consultants who specialize in equity, diversity and inclusion to help  accomplish this goal. “We want to build a structure where we better serve the artists and creative professionals we work with,” Bauer-Lyons said in an email.

Many metro artists hope the Institute gets it right. The dismantling of Serenbe Playhouse has left one less place for artists to work in an already talent-saturated and financially starved theater market. Quiñones, Smith and Moses all expressed a desire to see more people of color on staff, and preferably a Black or Indigenous person as artistic director. Serenbe Institute has not committed to hiring an artistic or managing director of color.

The Institute’s timeline in uncertain. Griffin says that she and the rest of the board are committed to the change no matter how long it takes.

I departed my role as founder & artistic director at Serenbe Playhouse approximately seven months ago, on good terms. In recent weeks, I have seen social media posts that relate the experiences of several BIPOC artists who worked on past productions during my time there, including people with whom I have maintained friendships after leaving Serenbe. I would never seek to invalidate or diminish the genuine emotions expressed in these posts, but they have taken me by surprise. To the extent that it helps them in any way, I want these artists to know that I had no intention of causing them pain or disappointment. I do not claim to be a perfect person and there have undoubtedly been instances when I have failed to live up to the expectations of people I work with and people I care about. To anyone who feels that I let them down during that time, I sincerely and humbly apologize.