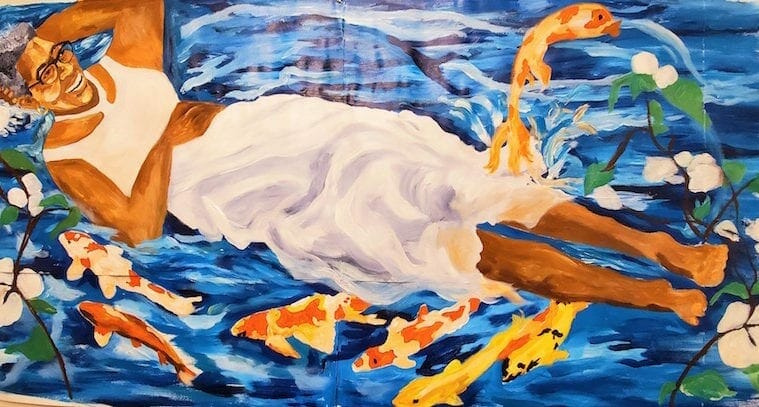 This detail from Ashley Dopson's proposal for her "Fish Are Jumping and the Cotton Is High" mural features Cabbagetown's famous Miss Bertha floating in water among jumping koi fish, which represent strength and bravery.

“Fish are jumping and the cotton is high.”

You may recognize those words from the Gershwin song “Summertime” from Porgy and Bess. It finds new meaning on the streets of Atlanta this fall as the title of new mural celebrating a street-art milestone — Atlanta’s 1,000th mural. The new mural, titled Fish Are Jumping and the Cotton Is High, is from artist Ashley Dopson and should be finished this month in southeast Atlanta at Wylie Street and the Krog Street Tunnel.

Dopson is also the artist behind the #BlackLivesMatter mural at Kipp Strive Academy in the Westview neighborhood. It became the official 1,000th mural, according to the Atlanta Street Art Map. Fish Are Jumping celebrates that achievement. That Dopson painted both is a coincidence.

Fish Are Jumping arrives a decade or so into metro Atlanta’s growth as a street-art mecca that attracts local and global artists who put paintbrushes and spray cans to work, bringing larger-than-life images to walls all around town. A work in progress. Ashley Dopson paints “Fish Are Jumping and the Cotton is High” at Wylie Street and the Krog Street Tunnel in southeast Atlanta. (All photos by streetartmap.org)

Arthur Rudick, a retired Coca-Cola engineer, created the Street Art Map in 2017 after taking Brooklyn’s street-art tour while on vacation. He discovered that Atlanta lacked any real way to track mural locations and the artists who paint them. He cracked that nut in 2017 when he launched the Street Art Map with 200 documented and mapped murals. He’s enthusiastically photographed and cataloged new murals ever since and archived older murals as they’ve disappeared.

“A thousand murals in Atlanta is a huge accomplishment,” Rudick says. “Why should I be the only one to know this trivia fact? Our muralists deserve recognition.”

Power Haus calls its project a “Mural Mixtape” and is using that analogy in the murals’ titles: Respect Black Women (Track 1), Shine on ‘Em (Track 2) and Peaceful (Track 3). Respect Black Women, painted by Yuzly Mathurin and Ash Nash is up now at 212 Edgewood Ave. N.E. Shine on ‘Em from Courtney Brooks at 831 York Ave. S.W. should be finished any day, with Peace by Zipporah Joe’l due later this week at 785 Lee St. S.W. The artists who have work featured in the digital billboards are Muhammad Yungai (Peachtree Center at 235 Peachtree St. N.E.); Gilbert Young (Reverb Hotel at 89 Centennial Olympic Park Drive N.W.); Angie Jerez (101 Marietta St. N.W.); and Dopson again (above the Westin Hotel motor lobby on Carnegie Way).ATL1000’s goal is to promote Atlanta as an arts destination, to encourage a community discussion about Atlanta’s street art and to give residents and visitors a family-friendly, safe street-art experience where social distancing can be practiced.

Dopson, 37, has been in Atlanta since her family relocated from New Orleans in 1990. The artist is also an elementary-school teacher and had long dreamed of painting murals. After years of rejection, she nearly gave up. Her determination paid off when she earned commissions for murals in Atlanta’s Peoplestown and West End neighborhoods.

“As someone who has applied for public-art commissions for so long, I was just excited to be considered a finalist,” Dopson says of Fish Are Jumping. “At first, I couldn’t believe it was real.”

She designed the mural in mid-March, while protests were spreading for Breonna Taylor, the 26-year old woman shot and killed by police in her Louisville, Kentucky, apartment. “On the heels of so many tragic and unjust murders, and the continuous denials of equity and equality on so many fronts,” Dopson says, “I wanted to create a piece that would recognize the ambiguous and sometimes exhausting feeling of not being able to breathe but yet maintaining beauty, vitality, courage and joy in the midst of the corrupt ecosystem that we live in.” Cabbagetown’s Bertha Wise, known to all as Miss Bertha.

Community outreach is central to her art. She consulted with Jake Elsas, executive director of Patch Works Art & History Center, which is dedicated to preserving Cabbagetown’s history. She learned that Cabbagetown’s earliest residents were mill workers who lived in shotgun houses. She also learned that the mill hired Black seamstresses for a time. This resonated with Dopson, who incorporated sewing machines and cotton in her mural proposal.

She became acquainted with longtime Cabbagetown resident Bertha Wise. “Everyone knows Miss Bertha,” Dopson says. “She’s been around for years and has seen the neighborhood’s many transformations. Her positivity is infectious, and there was something about her spirit that made me know I needed to paint her.”

Also depicted in the mural is Cabbagetown’s Rose Barron, an artist. Barron’s photography “reinstated a sense of femininity and strength,” Dopson says. “I need to make sure that her art is recognized and honored the way it should be, from one artist to another.”