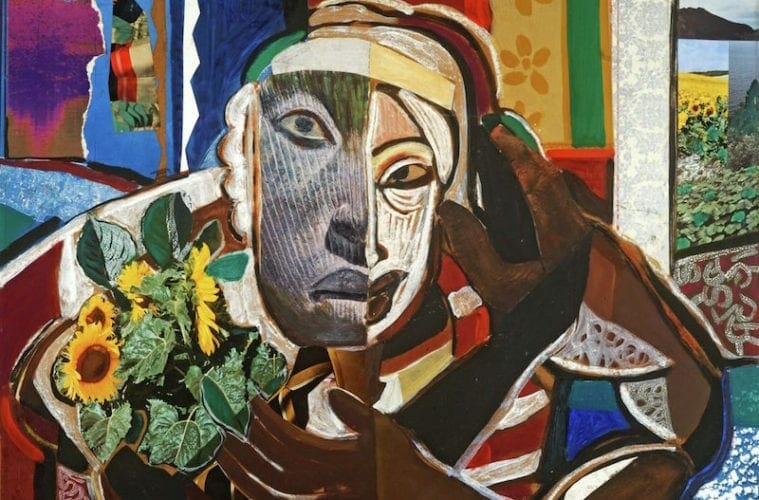 David C. Driskell's "Homage to Romare" (1976) will be part of the High Museum's "David Driskell: Icons of Nature and History," arriving February 6. The title of the collage and gouache on Masonite references the great American artist Romare Bearden.

The High Museum of Art is planning six exhibitions through spring and summer 2021, including its Julie Mehretu retrospective (through January 31) and Dawoud Bey: An American Project, opening Saturday (November 7) and continuing through March 14.

The Mehretu show is the first major traveling exhibition of work by the Ethiopia-born American artist. It was organized by the Los Angeles County Museum of Art and New York’s Whitney Museum of American Art, and is the first comprehensive survey of her career, covering more than two decades of work. It features 35 paintings and nearly 40 drawings and prints that are predominantly quite large in size and scale.

Mehretu is one of the most acclaimed artists of this century. She received a MacArthur Fellowship in 2005, was named one of Time magazine’s 100 Most Influential People of 2020 and sold one of her pieces for $5 million in 2008. Bey is a renowned photographer who’s dedicated more than four decades to portraying underrepresented communities and histories, from portraits in Harlem and classic street photography to nocturnal landscapes and large-scale studio portraits. The exhibit will feature some 80 works. This exhibition was organized by the San Francisco Museum of Modern Art and New York’s Whitney.

Our Good Earth: Rural Life and American Art. WINTER 2020–SPRING 2021. The High organized this exhibit of prints, drawings and photographs from its collection. It will include work by Winslow Homer and Rhonda Nicholls from the 19th century, and Thomas Hart Benton, Marion Greenwood, Ansel Adams and Andrew Wyeth from the 20th century, among others.

David Driskell: Icons of Nature and History. FEBRUARY 6–MAY 9, 2021. Driskell (1931-2020) was one of the most revered American artists of his generation, recognized for his vibrant and versatile painting and printmaking practices that combined keen observations of the American landscape with the imagery and aesthetic innovations of the African diaspora. This is the first exhibition to unite his paintings and works on paper, bringing some 60 works of art together. The High’s annual Driskell Prize, which dates to 2005, is named for the artist. It celebrates contributions to African American art. Organized by the High Museum of Art and Maine’s Portland Museum of Art with support from the Phillips Collection, in Washington, D.C. Mickalene Thomas’ “Les Trois Femmes Deux” (2018) will be part of the exhibit “Underexposed: Women Photographers,” opening in the spring.

Underexposed: Women Photographers From the High Museum. SPRING–SUMMER 2021. This exhibition gives a nod to the centennial of the passage of the 19th Amendment, giving some women the right to vote.  It will feature more than 100 photographs, many of them never on view before. Photography pioneers Betty Hahn, Barbara Kasten and Meghann Riepenhoff will be represented, as will Berenice Abbott, Margaret Bourke-White and Marion Post Wolcott, who did photojournalism, advertising and documentary work. The show also will highlight those who shot other women, children and families, including Diane Arbus, Nan Goldin and Sally Mann, and those who interrogate ideals of femininity through self-portraiture. Also on view: Work from contemporary photographers who challenge social constructions of gender, sexuality and identity, including Sheila Pree Bright, Zanele Muholi, Cindy Sherman, Mickalene Thomas and Carrie Mae Weems. On Monday (November 9), Lauren Tate Baeza joins the High Museum of Art as its curator of African art. The Atlanta native comes from the National Center for Civil and Human Rights, where she has been exhibitions director. She will oversee the High’s collection as well as plan exhibitions and programs.

While at the National Center for Civil and Human Rights, Baeza maintained the two ongoing installations in the American Civil Rights Movement and Global Human Rights Movement galleries and organized 16 temporary exhibitions and installations, including Fragments, a collaboration with designer Paula Scher, featuring passages from the Rev. Martin Luther King Jr.’s handwritten speeches and letters.

For the past two years, Baeza also has curated the Morehouse College Martin Luther King Jr. Collection, with some 10,000 items, and managed the James Allen and John Littlefield Collection. Before joining the Center for Civil and Human Rights, she was executive director of Atlanta’s APEX Museum, which interprets and presents history from an African American perspective.

Atlanta Contemporary has announced the creation of the Nexus Fund: Emergency Relief and will accept applications from artists through November 22. The Nexus Fund was made possible when the museum became part of the expanded Andy Warhol Foundation’s Regional Regranting Program.

In this, its first year, the Contemporary will give $1,000 to support 60 self-identifying visual artists and is committed to ensuring that artists of every ethnicity, race, gender expression, sexual orientation, disability status and socioeconomic class have access.

Applicants are not required to use funds for a project. The unrestricted $1,000 can be used to cover costs associated with living in these unprecedented times. The application process is blind. Grantees will be notified December 14 and receive their funds December 16. Application, details HERE.