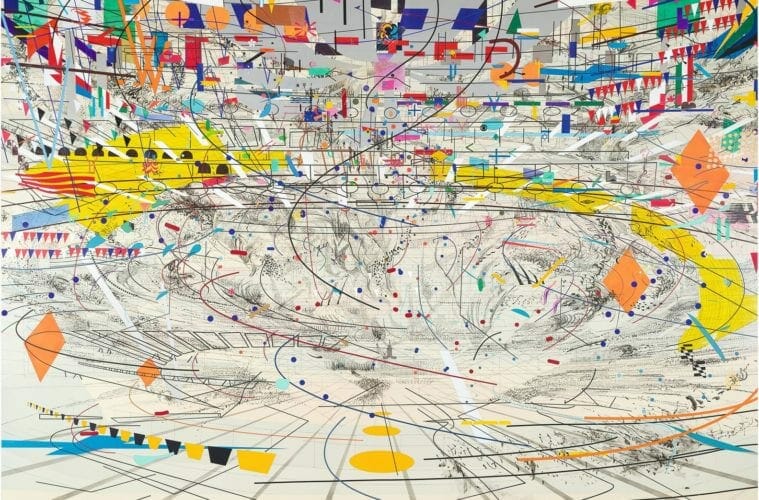 The first retrospective of Julie Mehretu’s career debuts at the High Museum of Art on Saturday (October 24) in a touring show co-organized by the Los Angeles County Museum of Art and New York’s Whitney Museum of American Art. The exhibition, titled Julie Mehretu, comprises nearly 40 drawings and prints, and 35 paintings made from 1996 to the present. The exhibit runs through January 31. (Reserve tickets HERE for Mehretu member preview days this Thursday-Friday.)

Mehretu is one of the most acclaimed artists of this century. She received a MacArthur Fellowship in 2005, was named one of Time magazine’s 100 Most Influential People of 2020 and sold one of her pieces for $5 million in 2008. Julie Mehretu likes to listen to music as she works, from Sun Ra to Jason Moran. (Photo by Teju Cole)

Anyone familiar with Mehretu’s Mogamma (A Painting in Four Parts): Part 2 — on view at the High since it acquired the piece in 2013, knows that engaging the work can be a vertiginous experience. The painting is  monumental scope and scale and  multilayered in depth. The series, named after a government administrative building on Tahrir Square in downtown Cairo, was inspired by the Arab Spring uprisings of 2011. For the first time in eight years, all four vertical canvases will be shown as a grouping in the United States.

Whether her early diminutive drawings from the 1990s or the large-scale abstract paintings for which she’s widely recognized today, Mehretu’s process has always involved the reconfiguration of diagrams, maps, cave markings, Chinese calligraphy, architectural renderings, graffiti, photojournalism and text. The resulting compositions yield her observations on a wide array of social issues, from natural disasters triggered by climate change to human rights violations against a backdrop of global conflict.

“The globally conscious themes in [Mehretu’s] work align strongly with our commitment to celebrate diverse perspectives through our collection and exhibition program,” says High director Rand Suffolk. “We look forward to offering our audiences a chance to experience a broad spectrum of her creative genius.”

Installation view of  “Mogamma (A Painting in Four Parts): from 2012. (Photo by Ryszard Kasiewicz)

Mehretu’s interest in bearing witness to instability and chaos stems from personal experience. She was born in Addis Ababa in 1970, and migrated to the United States with her family in 1977 to escape civil war as it intensified in Ethiopia. She was raised in East Lansing, Michigan, received her B.A. in art from Kalamazoo College and an M.F.A. from the Rhode Island School of Design in 1997. Despite the relative stability she enjoys today, a compulsion to make sense of one place from a different place still informs her work. The hardest part of the task, she says, is feeling inferior to the challenge of making art she feels must exist in the world.

But she is undaunted.

“The space that is the most fertile is the space that feels the most unknown,” Mehretu says in a Zoom chat from her home office in Harlem. “One painter described it as [feeling like] the ground is falling away from under you. Maybe it’s an issue of getting older and realizing that time is passing and that explains my fervor in the way I’m working. But the process of putting together the retrospective — which began five years ago — really shifted the tenor at which I was painting. The looking-back process allowed me a level of liberation and  freedom to be more playful, more intuitive and more agile in the making of some of the new investigations.” Getting her brain to disassociate and freeing her hand to paint instinctively is central to Mehretu’s process. When she’s not listening to music — her playlist ranges from Sun Ra to hip-hop and Kendrick Lamar to Jason Moran — she’s listening to books on tape, podcasts or lectures. The exercise allows her to get out of her own way and enter what she describes as a disembodied state. Many of her paintings are named after songs, if not a genre of music. And she ascribes the resulting “choreography and soundscapes” that infuse her expression to the ever-evolving playlists that offer her a portal to a heightened state of creativity.

Highlights of the retrospective include a selection of etching, photogravure, aquatint and engraving that track Mehretu’s career in printmaking. Early works like “Untitled (2)” from 1996 and “Map Paint (white),” also from 1996, are studies in fossilized topographies made up of drawings embedded between layers of poured paint. Midcareer works like “Stadia II” (2004) and “Black City” (2007) interrogate built spaces like sports and military typologies that are designed to accommodate and organize large numbers while containing an undercurrent of chaos and violence. More recent paintings like “Conjured Parts (eye), Ferguson” (2016) conjure the fatal shooting of Michael Brown in Missouri. A 2011 documentary about Mehretu by Tacita Dean, a British visual artist who works primarily in film, rounds out the retrospective. On Thursday (October 22) curator Michael Rooks will facilitate the High’s Conversations With Contemporary Artists: Julie Mehretu, a Zoom chat that will pair the artist with Christine Y. Kim, associate curator of contemporary art at the Los Angeles museum, and Rujeko Hockley, assistant curator at the Whitney. (Free for members, $20 for non-members. Registration required.)

Rooks, an early and ardent champion of Mehretu’s work, is unabashed in his praise for her output and likens the magnitude of her compositions to a Cecil B. DeMille film.

“Julie is one of the most consequential artists in the first quarter of this century,” he says. “She has managed to synthesize histories told and untold, and history in the making, with our present moment beset by dislocation and turmoil. Among the histories with which she contends is the history of visual culture, particularly the language of abstraction, which powerfully expresses the fragmentation, splintering, formation and reformation of our present moment.”