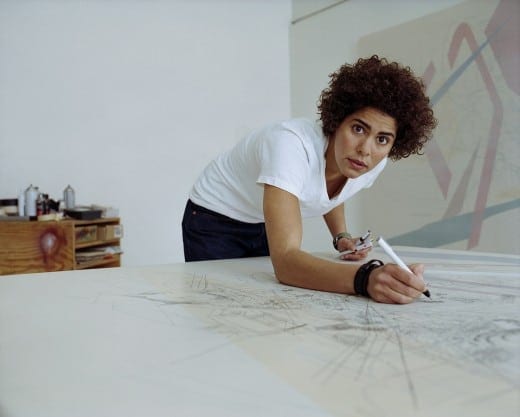 Q&A: A conversation with artist Julie Mehretu on process, purpose and the practice of painting The artist. (photo by Emmet Malmstrom)

Julie Mehretu, who will speak at the High Museum on April 21, makes large-scale paintings that combine the visual languages of architecture, mapping and gestural mark-making to form highly composed invented worlds.

With emphasis on the dizzying complexities of 21st-century living, Mehretu’s works reference a broad spectrum of systems — global interconnectivity, geopolitics, social networks and urban-planning — which are visualized through articulated line work in negotiation with explosive painterly abstraction. Mogamma (A Painting in Four Parts): Part II, one of two paintings in the High’s collection, belongs to a four-part series that investigates architecture of the public square as a site for political, ceremonial and mythological projection. Inspired by the events of the Arab Spring, the title is drawn from Al-Mogamma, the name of the central government building in Tahrir Square in Cairo, which was a key site in the political uprisings that swept the Arab world beginning in 2010.

Combining images of Tahrir Square along with renderings of other city squares where uprisings have occurred — the Red Square in Moscow, Plaza de la Revolucion in Havana, Assahabah Square in Darnah, Libya — the Ethiopian-born artist questions the interpretations of these locations as historical and contemporary sites of political conflict and social change.

ArtsATL: What resonates in your Mogamma series is the emphasis you place on the value of public space — public space as a First Amendment space, as an organizing space, a desegregating space, a place where democracy can be publicly exercised. Your work addresses architecture in terms of power and influence, here particularly, and the psychology of urban spaces as a realm of influence. How were you thinking about such ideas in the Mogamma paintings?

Julie Mehretu: One, there are these social and mythological and political projections we put on those kinds of spaces. We have these ideas that we ascribe to with a kind of social desire, and we follow it in a faithful way. In a sense, you can almost think of that kind of space or those types of projections and the desire we have for that kind of space as having that kind of fanatical type of religious, ceremonial desire. Not in the case of religion or that type of action, but social action or social change and how that can manifest . . .

There are historic sites where that type of action has taken place — those sites are ones that are used in the paintings — but also there’s this kind of desire and symbolism that can happen in those spaces [versus] what really does get achieved, what real social change does happen.

So, I’m really asking the questions of the contradictions that exist between the desire of a kind of action that might have worked in the past and might not necessarily work in the moment. And you see it now, post–Arab Spring, and the fallout of what has happened there in various countries, and you see it in a kind of delusion of the Occupy Movement here in the United States. And then how quickly those spaces and actions get co-opted by other forms.

ArtsATL: The late Gordon Matta-Clark was kind of building through “unbuilding.” You’ve climbed inside the architecture like he did as a means of deconstructing it and its symbolic values.

JM: Nice, and I think it’s interesting, especially in the context of the [public] square, and any of the public spaces, like Tahrir Square, a lot of the buildings that surround the squares, that create the container for that space, actually have very specific uses and were built with a very specific agenda . . . usually very far from what the building ends up being this container for.

ArtsATL: I think of your works as being somewhere in between someone like Mark Lombardi and his Topographies of Power, where there’s a system you’re trying to understand, and someone like Wassily Kandinsky, who was interested in mapping out that infinite interiority or inner subjectivity. It doesn’t seem like political critique is necessarily your primary agenda. Your lens seems wider than that — like you’ve panned back so far that you’re actually looking at space-time objectively, like looking at the chaos of the earth from an aerial point of view.

JM: I was actually just thinking about this recently. My earlier work from maybe 2000-ish to about 2006 was made much more from the kind of long-view perspective that you’re talking about, where I tried to make these pictures that were looking at the totality of these situations, where many events could take place.

The paintings now are much more immersive . . . as you approach the painting, there are areas where you almost feel like you can step into it. [In other areas] the marks and the architecture and the erasure glom together to create other forms that come out at you. So, to me, there’s this sense, because of their scale, they still require you to physically negotiate with them and move through them and travel through them, but it’s not as if you can ever get a full perspective, like a sense of this being the entire system, and I think in earlier paintings you really could. Julie Mehretu: Highlife (of Graceland after C. Abani), 2006, ink and acrylic on canvas.

ArtsATL: At some point you said, “these marks couldn’t exist with just rational thinking.” Every artist has a different way of describing that “non-rational” part of their mind that makes images. Philip Guston described it as being a “third” presence between him and the painting. For you, if it’s not rational thinking that’s making the marks, then what is it? How do you describe what’s happening?

JM: There are several things happening. I’m constantly playing with these various sides of making, one where you’re trying to make sense of what you’re doing and understand with some kind of rational perspective what’s happening in the work, the intention, who am I in the work, why am I interested in this and what’s really informing this — you ask these questions and you try to use rational means to make sense of that.

Then there’s the process where in order to generate and make work in the way that I’ve always made work, I really follow a much more intuitive form of knowledge-making and trust in the process . . . to be able to make and get my head out of the way.

Then usually after that process, I go back and try and make sense of what I’m doing, what’s interesting, what’s happening, what’s going on with my hand. So there’s this conversation that keeps going back and forth. I think what you said about Guston calling it a third hand is interesting. I think about it almost like this third space, a new space, some other new form that is emergent in the process of making but also in the process of looking and interacting with the painting. So, if you actually spend time and look at painting as a kind of time-based experience, a time-based media, then you can really participate with it . . . where this emergent space exists.

ArtsATL: With regard to the Mogammas, I was thinking about how after 9/11 there was an emergence of poetry into the mainstream as a way of dealing with the horror that had just happened, a way of accessing the expression of the emotion without having to be obligated to any definitive conclusions. Painting abstractions seems similar — you’re finding your way into what it feels like to be in these places but without having to make a finite conclusion.

JM: I think in many ways that’s the role of the artist and of creative thinkers, whatever they be. Chinua Achebe says, “The role of the writer is to create the headache.” I think it’s really true. It’s the place where you have to question and challenge notions and understandings and make sense of things, and sometimes you don’t have the appropriate language, and sometimes it happens through abstraction, but the proper questions and challenges take time.

ArtsATL: In going through interviews you’ve given in the past, one thing you mention often is a kind of prioritizing of self-awareness, a going inside yourself as a point of departure. I think it’s interesting to consider this notion of self-awareness, especially for someone who makes the work that you make. You seem to want to go in both extremes — both inside and out — simultaneously.

JM: Yes. A very good friend of mine said he likes to work in a way where he wants to speak before he thinks, because with the way he’s working, there’s something symptomatic about what’s going on with the work inside of himself [that is also part of] a larger context for us socially. I think that’s really the fundamental role of creative thinkers is this effort not just to make stuff, but to understand who they are in this larger context, and locate themselves somehow or another within that, whatever that might be . . . It plays a big role in the creative process. ArtsATL: I was watching an interview with art dealer David Zwirner on Charlie Rose. Zwirner was talking about how when he first opened his gallery, it became apparent that operating on a singular profit model could never compete in the larger art economy. His financial advisers suggested he expand his enterprise to multiple platforms. You seem to operate similarly in that you work simultaneously with many artist assistants making multiple works simultaneously. Do you think that model is required in today’s art world?

JM: No. Artists need to do what they need to do and make the work they need to make, whatever that means. Many parts of my practice are very isolated individual practice. There are times, when I’m working a specific piece, I need more people and it becomes a very different kind of project . . . There are other times where travel is a big part of my process. I think an artist with the most individual, quiet practice can make some of the most important, complicated and necessary work of our time. I don’t think that there’s any kind of guiding principle on that at the moment or ever.

Think of painters like Rubens, who were traveling and participated as diplomats and also had strong studio practices and had several studios, or very, very individual painters like Vermeer or Rembrandt, who worked from within their own place. You have that across generations, space, time, culture and place. What’s important lasts over time.