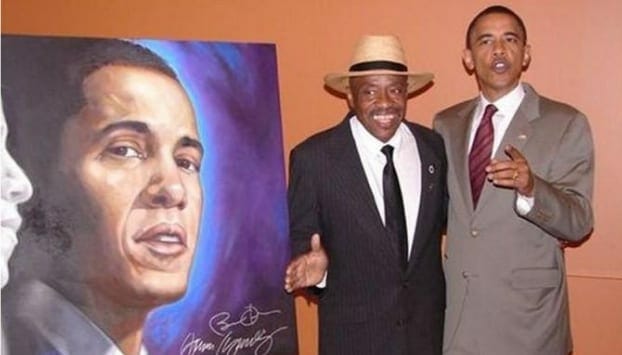 Gilbert Young painted a portrait of candidate and then-president-elect Barack Obama. When they met at a Cincinnati event in late 2008 or early 2009, Obama signed the painting, a signature that very likely is one of a kind. (Images courtesy of the artist)

Q&A: Gilbert Young on his famous “He Ain’t Heavy,” his “Liberty” drawing, art as protest

At 78, Gilbert Young is still a working artist. He continues to add to his As I See It series while planning a line of Black Lives Matter jewelry, among other projects, from his home and studio in West End.

The nationally known multidisciplinary artist and art conservator was born in Cincinnati and, in 1994, became an artist-in-residence at the University of Cincinnati. He spent 27 years there as director and conservator of the school’s fine art collection, moving to Atlanta in 1995 to become artistic director of the International Paint Pals Art Competition done in conjunction with the 1996 Olympic Games. Procter & Gamble commissioned him to design the Salute to Greatness Award presented annually by the Martin Luther King Jr. Center for Nonviolent Social Change, one of its highest honors. Gilbert Young’s drawing “Liberty,” based on Michelangelo’s “Pietà” sculpture, replaces Jesus and Mary. A Black Lives Matter tattoo is on the man’s shoulder.

Young’s drawing Liberty (2020) is an homage to Michelangelo’s Pietà. The differences are obvious, including the Black Lives Matter tattoo on the man’s arm. It’s one of many pieces in the ongoing As I See It series, which dates to 1980. His work has long exemplified what he and wife Winfrey Young refer to as “the art of activism.”

Young is also the artist behind History + Hope = Change, a painting of Barack Obama’s face that inspired the then-president-elect to sign the original and take a photo with Young at a meet-and-greet in Cincinnati.

Young’s most well-known piece, perhaps, is He Ain’t Heavy. It’s been featured in movies, on television, in tattoos, and has become a symbol for social responsibility. “I created it to express this idea,” says Young, that “whoever you are, wherever you are in life, you have the ability to reach back and help someone else. You are obligated to do it.”

Young talked about his life and work in a phone conversation with ArtsATL.

ArtsATL: What is your earliest memory of injustice?

Young: We had a small magazine called Jet. It was on sale for 50 cents. Emmett Till’s mother said, “I want to let them see what they did to my baby.” I never forgot that image. (Till was 14 when he was brutally beaten and lynched in 1955 Mississippi after being accused of offending a white woman.)

“He Ain’t Heavy” is Gilbert Young’s most well-known work of art.

ArtsATL: What is your earliest memory of the arts?

Young: It was interesting when I saw any black anything in art or art history books. I also saw a lot of negative images out of the South of people eating watermelons and smiling and grinning. We also had a story called Little Black Sambo in school. It was interesting that it was the only reference to us. He had exaggerated features.

ArtsATL: When did you first begin creating the body of work that exemplifies what you call the “art of activism?”

Young: I created He Ain’t Heavy, which is more than 40 years old. It’s the most important black image out there. I started early in my career. I was always aware of our condition.

ArtsATL: How does your “As I See It” series relate to the anti-racist and anti-police protests happening today in Atlanta and around the world?

Young: It makes a social statement. It related to George Floyd before he died. I did a piece called Liberty. I replaced the woman from the Pietà with a black woman. Three bullet shells are on the left-hand side of the painting.

ArtsATL: And the man in “Liberty” has his eyes closed?

ArtsATL: He has no shirt, no jewelry and one tattoo. Why is she looking at him like that?

Young: I tried to express the concern of this woman over the loss of this human being in her arms. It’s not to make him stylish. It’s to make him nude. If I had not put pants on him, it would suggest something else. We are naked in this world. We barely have our pants on when it comes to equity in this society.

ArtsATL: Is the Black Lives Matter tattoo on the man’s arm in the painting inspired by a real-life tattoo?

Young: No. I created that  tattoo. I’m getting ready to come out with a jewelry line with the same message so we can demonstrate with the same day-to-day awareness without holding a sign or marching. It’s artistically pleasing and socially conscious. People have conversations about something someone will wear. Young people aren’t collecting art as they did in my generation, but they are collecting fashion. That’s a big canvas waiting for artists to do some significant work.

ArtsATL: Do you see art in these protests?

Young: I see protests all over. It’s a good thing. It tells me we still have the energy to fight. We had the black fist in the ’60s and ’70s and ’80s. Art has always been a vehicle to tell stories, to promote revolutions and to glorify revolutions.