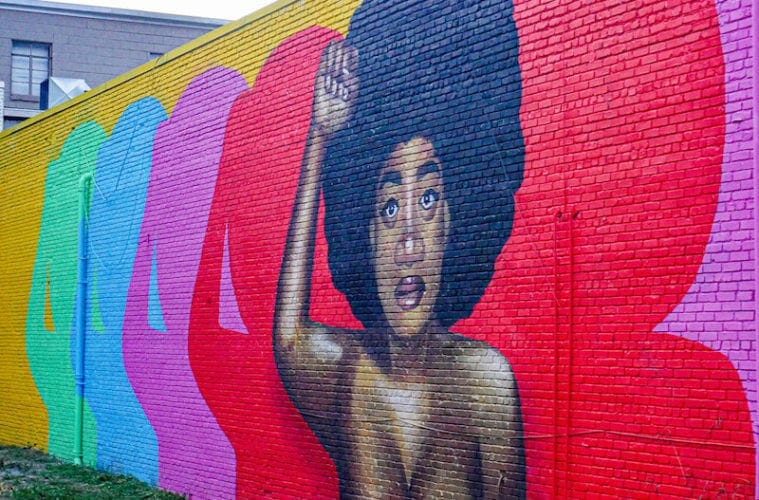 If spotted only while speeding past the Ormewood Square Shopping Complex, you may miss a crucial detail of Urian Booze’s Forever on the Map mural, one of six murals that make up the newish Civic Walls Project.

Take the time to stop, however, and you’ll realize that this piece is a memorial. Names emerge ghost-like  on bright yellow bricks — Trayvon, Sandra, Freddie, Michael, Ahmaud, Breonna, George . . . one after another, covering the whole wall. “I think Civic Walls has done a good job of being unapologetic but inviting,” says founder Toyin Adon-Abel Jr. “We’re allowing our artists to be Black and proud, make statements and not filter anything.”

Booze, a graphic designer by trade, says that she tends to conceptualize artwork in layers, which lent itself well to the process of creating Forever on the Map, her first mural. The last layer, the layer of names of slain Black men and women, was difficult to get through.

“There were so many,” she says. “They wouldn’t even fit. I was like, ‘I need to consolidate.’ It took everything out of me, emotionally and physically.”

The Civil Walls Project was launched in April by Toyin Adon-Abel Jr., the founder and creative director of the marketing agency Meddling Mind. The street-art initiative, he says, “aimed to join together Black creatives, artists and community leaders in support of equality, #BlackLivesMatter and any family who has lost a loved one to senseless violence and racial injustice.”

Adon-Abel grew up in London in the 1980s and ’90s and says he had an abiding interest in street art from an early age. He even did some tagging when younger, before graffiti was accepted as the art form it is.

The six Civic Walls Project murals were painted during the summer and can be found on walls throughout southeast Atlanta, in such neighborhoods as Grant Park, Ormewood Park, Inman Park and Cabbagetown. You could easily drive to see each mural in the span of about an hour (give or take), and it would make for a poignant trip. One thing Adon-Abel says he didn’t want to do is to create nice, pleasant messages that don’t spur conversations. “I think Civic Walls has done a good job of being unapologetic but inviting,” he says. “We’re allowing our artists to be Black and proud, make statements and not filter anything.”

Adon-Abel envisions a Part 2 to the project and says he hopes to add educational, advocacy and civic engagement components to the artistic mission and expand community partnerships.

Forever on the Map is kitty-corner from Black (Female) Power. The murals stand in stark contrast to the overgrown vacant patch of land next to them. Black (Female) Power shines with a radiance heightened by its drab surroundings. It shimmers and glows with a bottom layer of gold. A young woman stares outward, fist raised, with an expression that seems tired and determined, vulnerable and powerful.

Primarily an abstract artist, Cassandra “Honey Pierre” Hickey says she wanted her hands-on mural to have organic shapes. The more you stand and look at them, the more the lines dissolve and the more nebulous the forms become. The circles could be oxygen bubbles. The hands could be birds (conjuring the phrase “birds of a feather”).

Hickey says she had many conversations with curious neighbors during the painting process. “We described to them the message that we’re trying to put out about the community,” she says. “When we got the finished product, they said it made them proud of the neighborhood.” Dizzy and Quake’s quietly forceful depiction of George Floyd and his daughter springs from shrubs that mark the parking lot’s boundaries, a burst of radiant life in an unexpected spot.

Gianna’s face beams, her arms stretched as if to take flight, embodying this message about her dad, whose murder this past summer sparked worldwide protests against police brutality and racism. Floyd’s expression remains steady and supportive, his eyes obstructed by shadow. He holds not just his child but the weight of the world on his shoulders. The self-referential message is viewable only while headed west on Memorial Drive. It sits, almost tucked away, next to a small old brick church, amid one of the most rapidly gentrifying stretches in Atlanta. The mural’s message is clear.