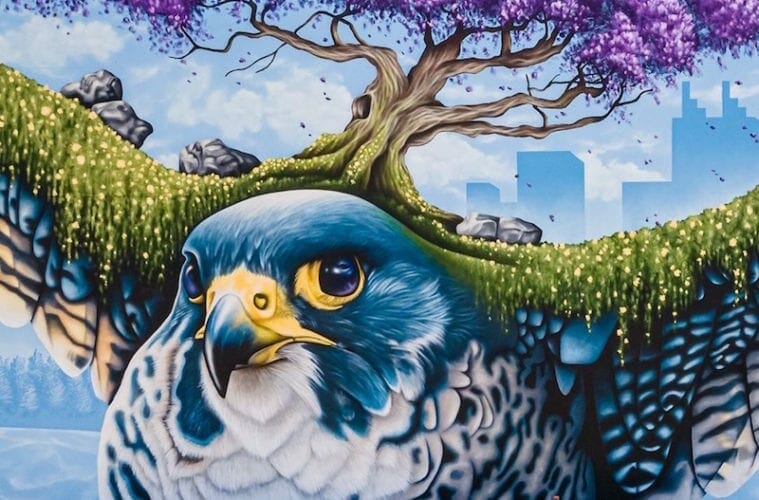 Thomas Turner finished his mural "With Love" at Atlantic Station last week. The piece -- this is a detail -- is more than 175 feet wide and 40 feet tall and is his largest creation to date. (Photo by Taylor Wallace)

Thomas Turner’s latest mural, his largest to date, flies high at Atlantic Station. The piece, titled With Love, was unveiled last week and is more than 175 feet wide and 40 feet tall. Motorists can spot it when driving southbound on the Downtown Connector. Thomas Turner credits a 2014 internship at ABV Gallery for getting him started. (Photo by Taylor Wallace)

This mural, commissioned by Atlantic Station and produced by ABV Gallery, is a love letter to Atlanta. The falcon represents the city; the tree growing from its back represents the transformative nature of Atlantic Station. The city skyline, with paintings of the Millennium Gate Museum’s arch, can be seen behind the bird. You can see more of his work and stay up to date on his projects via Instagram at @thomasturner_tt.

Turner, 33, was born in California and moved to Georgia as a kid. He lives in the Old Fourth Ward neighborhood. His participation in the yearly OuterSpace Project mural event and Atlanta United collaborations place him among Atlanta’s most prominent street artists. His creative ambitions caught fire in art classes at Valdosta State University, when he realized he had skills and began pursing a creative career. He later studied painting at Appalachian State University in North Carolina and graduated in 2012 with a degree in illustration from SCAD Atlanta. He credits a 2014 internship with ABV Gallery for his start. “The internship gave me real-world experiences and kicked off my career in mural-making,” Turner says, citing his work with mentor Greg Mike.

Turner has been compared to surrealist painter Salvador Dalí (1904–1989), renowned for his technical skills and his striking imagery. A recurring theme in Turner’s work is hyperrealistic paintings of animals in surrealist settings. “Art became an escape for me and a place that I could get my thoughts out on paper,” Turner says. This led him to use symbolism and representational figures. “Stories and symbols of interconnectedness are within every artwork I make,” he says. Other influences include California artist Craola (Greg Simkins) and Berlin’s James Bullough. Turner traveled and worked alongside Bullough after they met at the 2016 OuterSpace Project. “It was really James who taught me the spray-painting skills I use in my work today,” Turner says. “He has been a major influence on the way I paint.” Rooted in Royalty was painted in March to help kick off Atlanta United’s season (at 63 Georgia Ave. SE in the Summerhill neighborhood); Better Together (2020) is in the Companion bar & restaurant at 2315 Marietta Road N.W.; and Time to Soar (2019) was commissioned for pro soccer’s Campeones Cup (at Sequoyah Middle School in Doraville). Turner murals also can be seen in Buckhead, Decatur and Midtown. Detail of “Rooted in Royalty,” commissioned for the March to Soccer event that began Atlanta United’s 2020 season. (Photo by DV Photo Video)