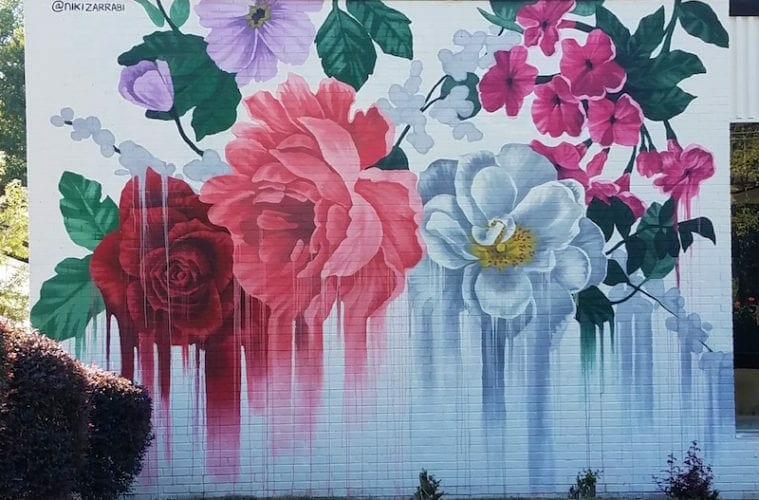 Niki Zarrabi rarely titles her murals. This was for an Outerspace Project, at Westside Market on Ellsworth Industrial Boulevard.

Niki Zarrabi’s body of work is strikingly feminine, often interpreting the fragile complexities of human life. The 28-year-old mixed-media artist often uses sweeping shades and delicate marks. Themes of spiritual connectivity can be seen in her studio work and her public art. You can see her work on Instagram at @nikizarrabi. Zarrabi is a first-generation Iranian American based in Atlanta. She grew up in Marietta and graduated from Georgia State University in 2014 with a B.A. in drawing and painting. Since then she’s worked as a full-time artist, doing everything from painting and installations to large-scale mural work.

She has always been interested in biology. In school she began exploring the relationship between spirituality and science. “I use art to study the structure of our universe as a means to understanding its sustenance,” she says. She plays in abstraction and creates surrealist paintings as a way to communicate her perceptions of human existence. Life’s fragility is depicted by layered marks and sheer materials (plexiglass or organza fabrics).

Her murals often depict botanical paintings. “The paintings push the idea of reincarnation as represented by flowers, seeing as plants are continually in a state of living and dying. The floral arrangements are illustrated as ‘melting’ to represent a return back to the Earth while the flowers represent life.”

Zarrabi has been doing public art since the summer of 2018. “I absolutely love large-scale installation work, but there aren’t many people buying that type of art,” she says. Murals feel like an alternative route to creating work that could find an audience. She approached the owners of Artisans Bar and Gallery in downtown Atlanta and proposed transforming a white wall into a mural. “It was a great way to get my foot in the door of mural-making, and after that, I hit the ground running.”

Zarrabi has painted in such Atlanta street-art and public-mural events as Forward Warrior in Cabbagetown, the OuterSpace Project and Artoberfest at the MET. She’s also partnered with the city of Atlanta to create an abstract mural as a crosswalk at the intersection of Broad and Poplar streets. This crosswalk mural, done in collaboration with the city of Atlanta in 2018, filled the intersection of Broad and Poplar streets downtown. (Photo by Atlanta Street Art Map) These flowers are part of the dog park at the Portico Buckhead condos, 120 Peachtree Memorial Drive N.W. (Photo by Atlanta Street Art Map)

Zarrabi’s work is in two ongoing shows — A Better View,” the large summer group show at ABV Gallery (by appointment and virtually through September 26) and the group exhibit FLORAMATIC at FreeMarket Gallery, which offers virtual gallery tours and the ability to see the artwork online. Zarrabi plans to spend the rest of 2020 in her studio. “I’m really looking forward to creating new work,” she says, “and I’m excited to experiment again,” she says.