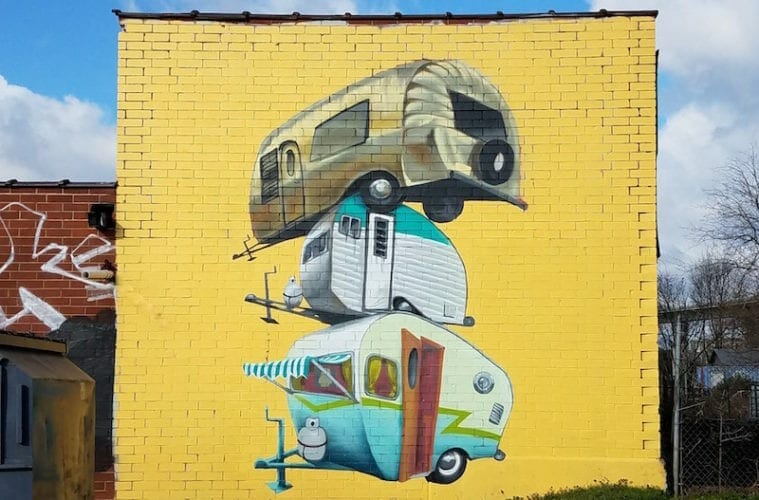 Jarrett Becke describes himself as a “visual artist, sign painter and cartoon enthusiast.” The native Atlantan, now 40, has been on a lifelong journey to discover how to share his art. He was influenced by his maternal grandfather, a portrait artist, and found sketching on paper to be second nature. Becke’s artwork includes cartoon-style drawings, realist portraiture and murals — both public and commissioned. See his work on Instagram (@j_becke) to see what art he’s up to next. “I wish I could have been more involved in the fine arts,” Jarrett Becke says, “but I’m able to be a living as a working artist.”

In the 1990s, the self-described punk–skater–kid painted graffiti on abandoned and dilapidated buildings in Smyrna, where he lived. After high school, he attended the Atlanta College of Art, but it wasn’t a fit. “I tried to go to art school, but I was just too much of a kid to take it seriously,” he says. He was expelled after one too many dorm–room scuffles.

Determined to keep drawing, he went west, landing in Las Vegas, where he drew hundreds of tourist caricatures a day as a casino artist. Next came Minnesota and more caricatures, at the Mall of America. For the past 20 years, he’s lived in Little Five Points, mixing with the neighborhood’s blend of eclectic artists and indie musicians.

When not sketching caricatures at Six Flags Over Georgia, Becke is painting digital cartoon–style illustrations of rappers from such groups as OutKast and the Ying Yang Twins. He estimates that he’s done more than 200,00 portraits over the years. “I wish I could have been more involved in the fine arts,” he says, “but I’m able to be a living as a working artist. I simply want to make art that makes people happy.” A conceptual steam engine, done for the Stacks Squares Mural Project, at Carroll and Tennelle streets in Cabbagetown. (More of Becke’s murals below. Mural images by streetartmap.org)

Covid-19 has shut down the festivals and public-art gatherings Becke usually frequents, so he’s painting privately commissioned murals in homes and businesses.