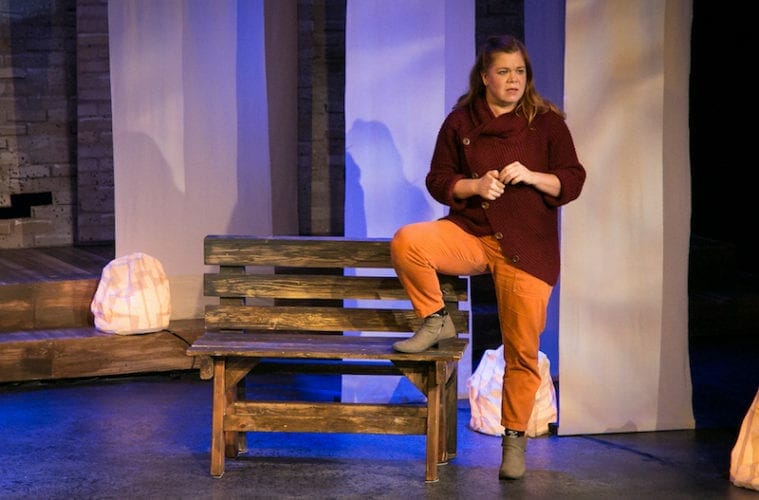 First-time playwright Lucy Smith shares a broad range of glimpses into motherhood: giving birth, being a daughter, the ways in which parenting shows up in nature. She also muses on constellations and dark matter. (Photos by Casey Gardner Ford)

Review: Wandering “Bears” at its best when digging into the raw messes of motherhood

There’s a joke that the difference between a good mother and a bad mother is that the good mother wants to throw her kid out the window but doesn’t.

Lucy Smith’s Chorus of Bears, playing virtually through November 1 as part of Synchronicity Theatre’s 4×4 series, ostensibly promises vignettes and meditations on motherhood. But, like the joke above, they’re not the feel-good, saccharine glimpses into the floral-patterned bliss that pad Hallmark’s balance sheet every holiday.

Instead, this piece pushes (pun intended) to frame motherhood as the visceral, raw and primordial experience it often is.

Smith shares a broad range of glimpses into motherhood: her experience giving birth to and raising her son, now in kindergarten; her experience as a daughter; the ways in which parenting shows up in nature. Thrown in for good measure are some musings on constellations and dark matter. 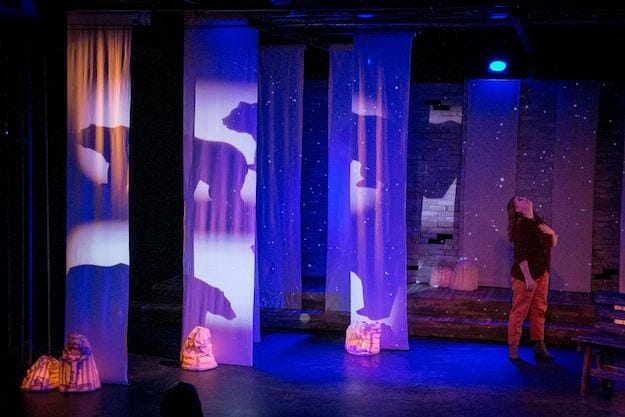 The bears in “Chorus of Bears” serve as a sort of Greek chorus and are portrayed as shadow puppets projected onto long, billowy curtains.

Sometimes, the breadth of the wandering narrative is hard to follow. Smith’s writing is often clever but can be frustrating — veering too abruptly from topic to topic. Sometimes, the show shoots a bit too high in the pursuit of meaning and cohesion among its many disparate elements.

Smith’s storytelling hits its stride, however, whenever she delves back into the raw mess of raising other humans — getting into the muck, guts and trauma of it all. Sometimes literally. With vivid imagery, she recounts her son’s traumatic birth, during which her leg was disconnected from her hip. “To birth my child,” she says, “I had to experience my own birth.”

Birth promises not just a beginning, Smith continues, it’s also an ending. “The person who gave birth to my son isn’t here anymore. She died. I live.” Immediately following this saga, she skewers relatives who tell her she has now “found her purpose.”

Later, when her son has a febrile seizure, she becomes what she terms a “smother mother,” so panicked about his health that she becomes temporarily mad with overprotection. “It’s actually painful to love something so much,” she says.

The intensity of that fearful, ferocious, all-encompassing love manifests in wildly (again, pun intended) ways across the animal kingdom. We learn some fun facts about octopus moms, nature’s ultimate martyr. And we hear about mama bears in Montana, who raise their cubs tenderly in infancy, then drive them away as kids so that they won’t pose a threat to mom’s future mates (how Joan Crawford of them). 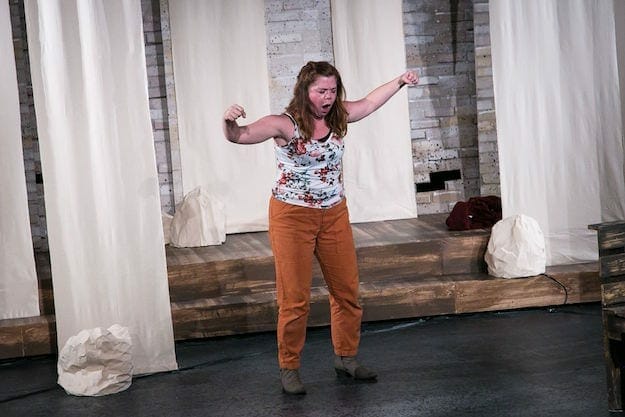 Playwright-performer Lucy Smith in a moment from her solo show. Roaring like a bear?

If you’re wondering whether the eponymous chorus of bears refers to a surprise ursine choir (who wouldn’t love that) or perhaps the official vocabulary term for a gathering of more than one bear, it’s neither.

The term for a group of bears is “sleuth” or “sloth,” not “chorus.” The bears here do serve  as a sort of Greek chorus, though, portrayed as shadow puppets projected onto long, billowy curtains. It’s an effective visual representation of the imaginary figures in Smith’s head, connecting her to something larger than herself. They pull her back from emotional spirals and goad her into being less polite. (Hear us roar, as Helen Reddy once sang.)

In some ways, this is also a story about learning to stop people-pleasing. Smith breaks the fourth wall throughout the show and tells audience members that she wishes she could read their thoughts.

Though it may not always hit the mark it’s aiming for, Smith’s debut outing as a playwright convincingly invites us to grow our ambitions about the kinds of origin stories we tell. It’s an intriguing, if somewhat flawed, exercise in drawing generous connections –between each other, our histories, other animals, our innate animal instincts, the stars and even the laws of physics.

It’s those connections that anchor the takeaway: Protecting the things we care about requires not only courage but perhaps a touch of temporary insanity.