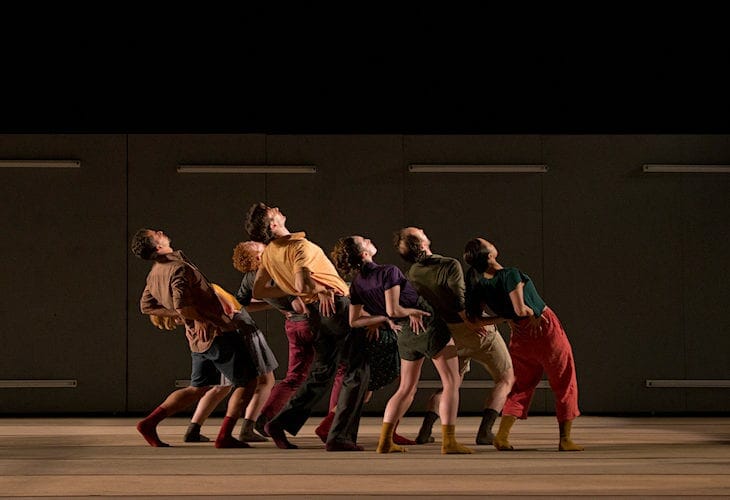 The world premiere of choreographer Ana Maria Lucaciu's "Long Ago and Only Once" for Terminus Modern Ballet Theatre will be viewable online as a film. (Photo by T.M. Rives)

You find yourself alone on an empty stage and realize an audience is watching. What do you do?

Choreographer Ana Maria Lucaciu asked members of Terminus Modern Ballet Theatre that question while creating her first evening-length piece, Long Ago and Only Once. Terminus cofounder Tara Lee responded with no less than a revelation that began to form the heart of the work.

Cocreated with the artists of Terminus, Long Ago and Only Once is available online in a version filmed by Lucaciu and T.M. Rives through November 21. Tickets start at $15 for students and $35 for general admission. A $50 VIP package includes an artist talkback via Zoom. Choreographer Ana Maria Lucaciu says it was an exhilarating experience to set her first full evening-length work on the dancers at Terminus.

A recent socially distanced live performance filmed at Kennesaw State University offered the satisfying sight and feel of dancers’ bodies in motion — their interplay of muscle tension and release, and of equipoise moments that yielded to momentum before halting in moments of taut stillness.

At one point, Lee stepped to the front edge of the stage and posed with one arm open to the side, like a Shakespearean actor preparing a soliloquy. She began to mouth the words of a song, but no sound came out. The image seemed to represent Lucaciu herself — a rarified dancer and assistant to acclaimed choreographer Alexander Ekman, whose works she’s staged around the world. Suddenly, Lucaciu is finding her own choreographic voice.

Lucaciu spoke about her process via FaceTime last week from Oslo, Norway, where she’s staging an Ekman work on the Norwegian National Ballet. Her clear blue eyes sparkled over delicate facial features and her thoughts flowed with enthusiasm and a sense of discovery at every turn of phrase.

A serendipitous path led Lucaciu to the artists of Terminus, whose influence on her choreographic process and the piece itself is indelible and could only have happened with them and in this unique moment in time, she says.

Lucaciu met the Terminus cofounders in 2015 when she staged Ekman’s Cacti on Atlanta Ballet, then under John McFall’s artistic direction. Lucaciu, born in Romania, had trained at Canada’s National Ballet School and danced with companies ranging from the tradition-steeped Royal Danish Ballet to the edgy Cedar Lake Contemporary Ballet. She had no interest in choreographing until she encountered actor-director Zachary Fine’s uniquely physical approach to clowning. “I remember thinking, ‘There’s something here that nobody is tapping into that I love,’” she said. “Suddenly, I felt like I needed to make these ideas physical. They needed to live in a physical world.”

Soon after, a student she’d taught in a summer workshop asked her to choreograph a solo for the senior concert at the State University of New York Purchase College Conservatory of Dance. Other Purchase students followed, and conservatory director Nellie Van Bommel commissioned a work from Lucaciu, which debuted in 2018. The evolution of her world premiere was fueled by input from the Terminus dancers, choreographer Ana Maria Lucaciu says. (Photo by T.M. Rives)

Lucaciu discovered a love for choreography. “When it’s working, it is truly the most wonderful thing,” she says. “And even when it’s not working, it is so enlightening, because it makes you problem-solve in ways that you do not normally do.”

Lucaciu happened upon dancer Nathan Griswold while staging Cacti for a second time at Atlanta Ballet. They had worked with some of the same people in Europe, and that chance meeting led to a relationship with the Atlanta-based collective Fly on a Wall and the creation of Slightly Off Stage. The duet, about two people waiting for someone they’ve never seen and following orders from someone they don’t know, reflected her life at the time. She was breaking from her identity as Ekman’s assistant and establishing an artistic voice of her own.

Lucaciu and Griswold debuted Slightly Off Stage at the 2018 National Theater Festival in Bucharest, Romania, and performed it the following year at the Windmill Arts Center in East Point. By this time, Rachel Van Buskirk, John Welker, Heath Gill, Christian Clark and Lee had split from Atlanta Ballet and formed their own company. Several attended the performance and Welker invited Lucaciu to create an evening-length work for Terminus.

It was an exceptional opportunity, Lucaciu says, to work with some of the best dancers in the world. “They are so incredibly honest and generous, easy and willing,” she says, adding that it’s “rare to have such good artists be consistently driven and attentive, every day of the week.”

That commitment, combined with the dancers’ technical skill, made working with them “a total dream,” she says, adding that it is unusual to find so many mature dance artists in one group.

“With Christian, you don’t have to tell him anything,” Lucaciu says. “You can feel the archive of experience that just moves with him as he moves onstage.” Taking cues from clowning games, Lucaciu came upon the theme of waiting — for a joke to be told, a song to be sung or for plants to grow — and the conflict inherent in those suspended moments. It was in this in-between space that Lucaciu made a discovery while working with Lee.

Lucaciu introduced a clowning game in rehearsal in which a group of people walk onstage, initially unaware that an audience is watching. Once the performers realize they have an audience, someone gets pushed to the front and has to improvise on the spot.

The experience triggered a childhood memory for Lee who, at age 8, became enamored with the Whitney Houston song “The Greatest Love of All” and performed it over and over in her kitchen, singing and dancing to a cassette recording.

As Lee told her Terminus colleagues this story, she remembered the lyrics, which softly came out. “It was so touching,” says Lucaciu, who realized she’d found the seed for Lee’s character.

“She didn’t quite get it out, vocally, which I thought was interesting,” Lucaciu says. She envisioned that Lee’s struggle to get the words out would build into a cathartic release in the form of a “raw, wildly physical solo,” after which Lee would finally sing the song.

Lucaciu struggled to draw this feeling of nervousness out of Lee. “I have a certain way of moving and being, which is ebullient and over the top,” Lucaciu says, “and Tara is thoughtful and composed. I wanted her to be this bottle of champagne that was ready to pop, and she could not quite connect to that.” Choreographer Ana Maria Lucaciu and dancer Tara Lee (above) struggled at first to find the heart of Lee’s character.

With limited time before filming, Lucaciu sought a different path to the nervous energy she was after. “I was like, ‘I want to try to find this in you, but I don’t want to be bulldozing you over with it,’” Lucaciu told Lee. “It was just interesting being really inside it, having to navigate it gracefully.”

About three-fourths of the way through Long Ago and Only Once, Lee is again alone onstage, mustering the courage to speak. She circles the center, shaking her fists in frustration. “You should do it,” she mutters to herself. She does jumping jacks and push-ups to psyche herself up, saying, “You can do it.”

A microphone appears in a spotlight, inviting her to sing. But just when she’s finally ready to speak, another performer cuts her off, loudly reciting trivia into the mic. Another follows, then another. Lucaciu juxtaposed this with other quartets, trios and a remarkable duet by Van Buskirk and Clark, and the effect is oddly thought-provoking.

“I remember thinking, ‘Ah, this bubbly person, this nervousness, this thing that has been on her heart this whole time, maybe it’s not that important after all,’” Lucaciu says. “Maybe the catharsis is she doesn’t have to say it, and she is OK with that.”

It’s as if Lee’s character had reached a point where she didn’t need an audience. She didn’t need stage props. She “could just go and be,” Lucaciu says, “which is a euphoric and lovely ideal place to be.”

It wasn’t an easy discovery. “I tried too hard to find myself in her,” Lucaciu says, “but ultimately, she gave me what it is. And that is the most wonderful gift out of this whole thing. It was like, we found Tara.”

Lucaciu learned that when choreographing, there’s always a choice between imposing your vision on the artists in the room and listening to what they have to offer. It’s the delicate balance between staying true to one’s vision while allowing it to be malleable.

“Follow them, feel what they’re doing, feel their vibe, and then go with that,” Lucaciu says. “Because if you go against that, what will come out will be a forced effort, rather than an honest effort. It is up to the person at the front of the room to allow that to live, or not.”