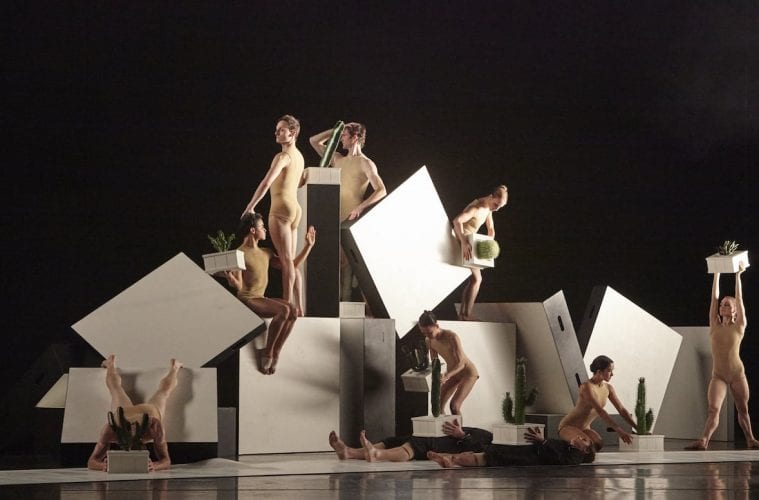 Atlanta Ballet’s Cacti was a fitting, and humorous, finale to an exciting season. (Photo by Kim Kinney)

This season, Atlanta Ballet dancers have run the gamut — or gauntlet, perhaps — of varied and challenging styles. They’ve conquered demands ranging from the drama and musicality of Jean-Christophe Maillot’s Romeo et Juliette to speaking roles in Helen Pickett’s heart-stopping Camino Real; from Alexei Ratmansky’s intricate Seven Sonatas to Ohad Naharin’s visceral Minus 16. Incredibly, last Friday evening, the 23-member troupe showed no signs of fatigue; instead doling out more of the enthusiasm, imagination and honesty that have become company trademarks.

The program began with Angel’s Share by Heginbotham, a former member of the Mark Morris Dance Group who started his own Brooklyn-based company in 2011 and received the Jacob’s Pillow Dance Award last summer. The ballet was inspired by the idea of the “angel’s share,” the portion of whisky or wine that evaporates into ether during maturation. In a program note, Heginbotham explained, “The good and sincere heart of this company, and the extraordinary abilities of its members, indicate that the cask is, in fact, empty; all of the contents are rarified and heavenly.”

There was a sense of ascension in the elongated ‘V’ lines that decorated the gold-lit upper stage space and also appeared in the ladies’ dresses. Men’s costumes — black T-shirt and white tights — were a reverse image drawn from Balanchine’s works, suggesting a sense of play between modern dance and neoclassical ballet. An ensemble string trio played Hungarian composer Ernö Von Dohnanyi’s music as Heginbotham explored changing relationships among the five dancers.

In Jared Tan’s solo and throughout the piece, there was a touch of Morris’ influence: robust musicality, a gentle receptiveness to impulse, and the use of the back to enhance body shapes. Dancers sprang from the wings in contrapuntal lines, dipping and rising with buoyant leaps. Their hands wavered softly in front of the body like ether rising.

As dancers skipped sideways across the floor, their arms glided upward in the narrow vector shape. Hands held, pairs of dancers spun around each other as the legs alternately flew out to the horizontal. In a ladies’ duet, Yoomi Kim emanated a sense of expressiveness through shape and texture that belied her technique; Kiara Felder had an almost uncontainable exuberance in her sparkling lines. Pointe work sometimes posed challenges to Heginbotham’s vocabulary, which seemed more in keeping with Morris, the barefoot early moderns and classical Greek art. But it was nice to see the subtly different styles of ballet and modern dance meet on stage as dancers helped bring forth a fresh creative voice.

Classical technique is the backbone of a ballet company. Even as today’s troupes push into new forms and the avant-garde, the classical tradition remains a foundation for exploration and a lens, or distant mirror, for understanding new work.

Yuri Possokhov’s Classical Symphony, set to Prokofiev’s work by the same name, celebrates this tradition in his tribute to Peter Pestov, a ballet teacher who nurtured Possokhov as a student at the Bolshoi Ballet Academy in Moscow. The high-spirited work also nods to Leonid Lavrovsky’s ballet set to the score, a work Possokhov danced as a student at the Academy.

Possokhov honors Prokofiev, whose score draws from Hayden’s classicism but brings the 18th century composer’s ideas forward into the 20th century to create a neoclassical style, much as Balanchine’s neoclassicism fused modern concepts with classical ballet, extending the language kaleidoscopically.

Possokhov builds on a similar but updated approach. A traditional lady’s gesture — smoothing her tutu — became full-torso rippling of spine and arms. As with Prokofiev’s music, partnering had sharp, angular tensions. Women pitched forward into arabesques over men’s shoulders; as their partners whirled them around, they opened their legs high to the side.

Jackie Nash was fearless and flirtatious in her first lead role. Deftly partnered by Christian Clark, Nash lowered into a grande plié, or deep knee bend, spun several pirouettes near the floor, circled the leg and slid out across the floor. Peng Yu-Chen peeks out in Cacti. (Photo by Charlie McCullers)

The ballet challenged dancers at every turn, allowing them to show dazzling technique and clean, tight ensemble work. In the last section, the stage filled with men’s bounding leaps interspersed with lofty aerial turns that soared like birds in flight.

There’s a thread of expressionism in contemporary dance, especially the genre’s European branch, often marked by dark, sparse stage realms where emotional experience is intensified through distortion or exaggeration. With that aesthetic is an attitude toward art-making that tends to take itself way too seriously. Or at least, that’s the point Alexander Ekman makes in Cacti, perhaps the most entertaining and humorous work Atlanta Ballet has shown on the Cobb Energy Centre stage.

Cacti makes fun of the “artsy-fartsy critic voice” Ekman encountered when, in his mid-20s, he suddenly became a public figure in the dance world. Both abstruse and meaningless, Cacti’s text comments on how we overanalyze experiences with art that can’t be put into words.

But at the same time, Atlanta Ballet’s performance of Cacti felt like the expression of a rebellious younger generation poking fun at its elders’ mannerisms. Ekman deconstructs the genre’s aesthetic framework, throwing together every cliché and pretense into an irreverent assemblage of gags wrought into a seamless presentation, visually and rhythmically textured and executed with precision, intelligence and off-beat, deadpan humor. A bank of LED lights shone out at the audience; a pipe laden with stage lights tilted precariously over one side of the stage. Later, rows of lights lowered down on dancers, threatening to crush them. Cones of down light brought the audience’s scrutiny to one, four, eight or more dancers running in place on their platforms. They wiggled their spines; they stood on all fours while one leg, reached behind, shook spasmodically.

Nadia Mara and Heath Gill danced a brilliant duet, their voice-over conversation detailing the verbal subtext as their relationship grew and devolved.

Cacti ended on an uncertain note. As with a music box slowing down, dancers walked slowly toward the audience, dispersing into chaos. Each offered the audience a potted cactus, the seat of all meaning and meaninglessness, suggesting that in contemporary dance, comic relief is long overdue.

Indeed, MAYhem’s varied works offered different kinds of levity, from rising ether to soaring leaps to laughter. The company’s next season won’t start until December with the return of Atlanta Ballet’s Nutcracker, but John Welker — an AB dancer and founder of the ballet’s summer troupe Wabi Sabi — will appear in Back Side of the Tent’s contemporary circus, Prelude to Toō May 29-30 at the Rhodes Theater.