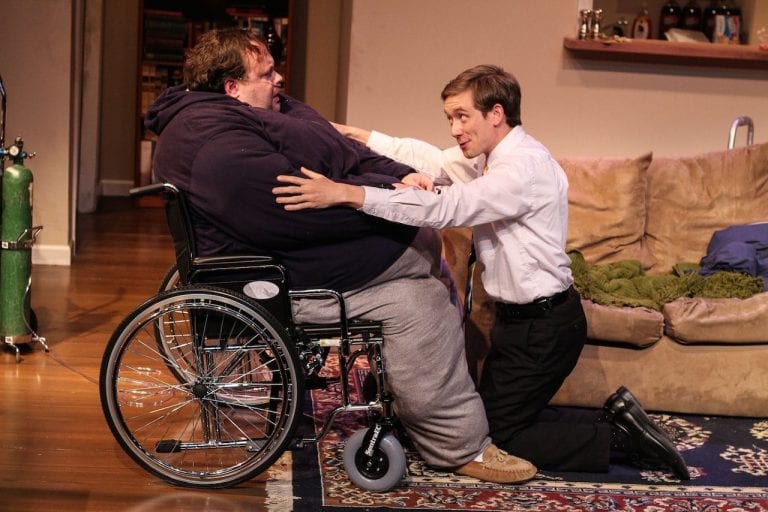 Freddie Ashley and Kyle Brumlley in "The Whate." (Photo by BreeAnne Clowdus)

We never learn the exact weight of Charlie, the main character of Samuel D. Hunter’s award-winning 2013 drama The Whale, a role being taken on by Actor’s Express artistic director Freddie Ashley at his theater through June 14.

Charlie himself doesn’t know, but he thinks he’s somewhere around 600 pounds. He’s gotten so huge that stepping on a scale is out of the question, even standing up or making his way to the bathroom can present inordinate difficulties.

Charlie hasn’t left his apartment in years, but he makes a little money teaching essay composition online; he uses a microphone so his students never see his face or body. He mostly sits on the couch and pigs out on junk food. His self-destructive weight gain — along with his refusal to visit a hospital — have brought him to the brink of death in spite of the efforts of his only friend, a nurse, Liz (Tiffany Porter), to keep him alive.

As he enters what looks to be the final weeks of his life, he’s visited several times by a svelte and crisply clean young Mormon missionary, Elder Thomas (Kyle Brumley), and he also seeks to reconnect with his teenage daughter, Ellie (Stephanie Friedman), whom he hasn’t seen in years.

What’s best about The Whale is its cast, which is without a doubt among the strongest ensembles in an Atlanta show in years. Director Heidi Cline McKerley knocked it out of the park before the first rehearsal began simply by selecting the actors for their roles; everyone locks into place with a beautiful and satisfying perfection.

I especially admired Porter as the best friend and nurse. She inhabits the role with humor, evoking the character’s simultaneous toughness and vulnerability. Friedman also shines as Charlie’s beyond-difficult daughter. He’s desperate to overcome any challenge to connect with her, and she’s determined to be the kid who’s impossible to connect with. She seemingly peers out at the world through a nasty haze, the sharp, piercing eyes always looking for a way to lash out and wound.

Charlie and Ellie’s reunion could easily become cloyingly sentimental, but the playwright takes us in an opposite direction, making the relationship a difficult one: Ellie is truly unpleasant. There’s something pathological about her cruelty, which goes well beyond the unthinking candor of a rebellious teen.

We feel a number of emotions for Charlie — pity, anger, disgust, sorrow — and in the end, truly complicated and rich sympathy remain more elusive than they should be. He’s so incredibly pathetic and self-destructive, helpless and dejected, that we sometimes feel too conscious that his lowly position is an authorial creation.

Moreover, it’s difficult to feel rich emotions for someone whose terrible situation is one that’s been chosen. Hunter also often tells his tale in short, minimalistic scenes which can occasionally feel too declarative and plodding, and the overarching metaphors involving writing, whales and Moby Dick, are worked to death.

Still, though the script is not perfection, the casting is, and the fine ensemble works at the top of their game, making The Whale the final “don’t miss” show of the theater season.