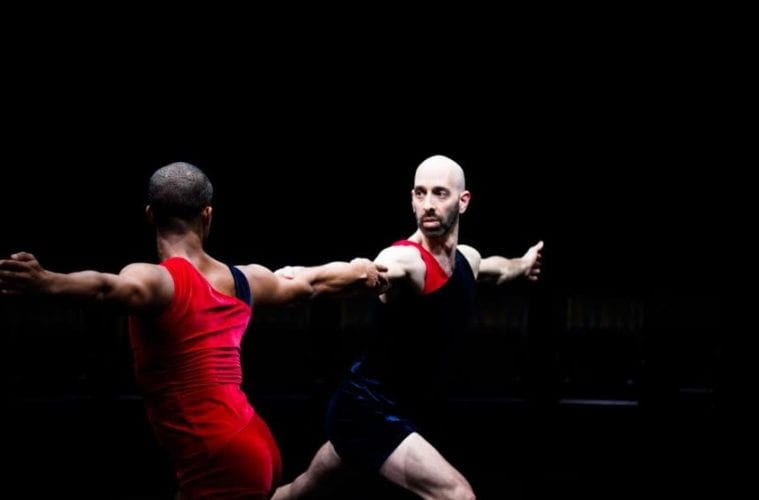 Preview: As it reaches its 21st year, Modern Atlanta Dance Festival offers a weekend of firsts Daniel Gwirtzman performs The Oracle with his dance company. (Photo by Anna Kuzmina)

The Modern Atlanta Dance Festival (MAD), running May 22-23 at the Balzer Theater at Herren’s, will celebrate its 21st year swathed in firsts. In a move to breathe fresh life and prominence into the annual event, Douglas Scott, creator of the MAD Festival, is expanding the event with some innovative additions to the usual roster.

The first addition, a 24 Hour Dance, took place a week before the festival opened. Conceived in collaboration with Anicka Austin, Shawn Evangelista and Morgan Carlisle Thompson of the MAD Festival Board and directed by Thompson, the event took place at Eyedrum Art and Music Gallery downtown. Each choreographer was given a quote, with 24 hours to create a piece based on that quote. The winning piece will be performed as a pre-show act on the opening night of MAD.

The creation of plays, dances, music and visual arts pieces within a 24-hour period is a growing trend in the arts world. Still a young concept, the 24 Hour Dance in conjunction with the MAD Festival is a first for the Atlanta dance community.

The Pioneer of Atlanta Dance award, the second addition to the MAD Festival, was created to commemorate Atlanta area dance artists and educators who made pivotal contributions to the regional community. “We have this generation [of dancers and choreographers], we need to get their stories; we need to honor them,” says Scott.

Scott, a member of Mitchell’s company from 1985 to 1989, speaks fondly of Mitchell. “[Her work] was always very accessible with great sense of dramatic structure,” he says. Scott credits his own sense of dramatic structure to Mitchell. There are a multitude of stories of dancers, like Scott, who Mitchell nurtured and who continued on to lead successful lives as dance artists and educators.

To celebrate Mitchell’s life and legacy, Scott will present her with a one-of-a-kind glass sculpture by local glass smith, Michael Labbe-Webb, at the MAD performance on Saturday, May 23. The Pioneer Gala reception, celebrating Mitchell’s impact on the region, will begin at 9:30 p.m. in the lobby of the Rialto Center for the Arts, located next door to the festival venue. Natalie Eggert’s I am Rubber, You are Glue. (Photo by Lori Teague)

The adjudicator panel for this year’s MAD Festival offers another first. At the recommendation of the MAD Festival Board, Scott invited Marium Khalid, performance artist and founding member of SAÏAH Arts International, to adjudicate, marking the first year an artist of another genre has participated in the adjudication process.

Scott plans to continue to include visual and performing artists from other fields on the panel in future years. He feels that input from an artist of another field brings valuable insight to the adjudication process. The other two adjudicators, Christopher K. Morgan and Emily Yewell Volin, are practicing dance artists and educators.

The line-up promises a wide range of dance artists at different points in their careers, from Natalie Eggert, a freshly minted graduate of the Emory University dance program, to established artists such as Emory senior lecturer George Staib of Staibdance (and an ArtsATL contributor) and Kennesaw State University assistant professor Daniel Gwirtzman of New York-based Daniel Gwirtzman Dance Company (DGDC).

DGDC’s performance represents yet another first, as the MAD Festival serves as the company’s Atlanta debut. Company members Jonathan Alsberry, Brittany Posas and Gwirtzman will perform a section from a full-length piece, The Oracle.

“The Oracle explores the complexities, subtleties and significances of the spaces and times in which we come together as a community,” Gwirtzman explains. “The intersection of people is at its heart. Not rooted in any specific history, event or time, The Oracle represents a continuum of gatherings, which repeatedly define our individual and collective experiences, moving us forward in the cycle of life.”

With this premiere embedded within a longstanding festival, Gwirtzman hopes to whet the appetites of Atlanta dance audiences for future DGDC performances.