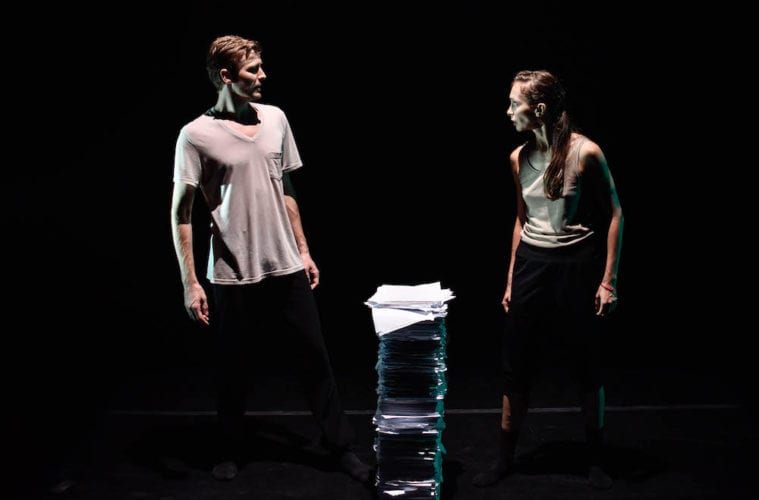 Nathan Griswold and Ana Maria Lucaciu face off near the beginning of Slightly Off Stage. (Photo by T.M. Rives)

When people face life’s most difficult challenges, there’s always a ridiculous moment that reveals the absurdity of the situation, dance artist Ana Maria Lucaciu said last weekend — that thread of humor that lightens the dark passage. Such flashes can disrupt habits, shift perspectives and prompt us to ask, how did we get here?

It’s a premise of Slightly Off Stage, the edgy and thought-provoking dance theater duet that Lucaciu and Fly on a Wall cofounder Nathan Griswold performed last weekend at the Windmill Arts Center. Both accomplished dancers are developing their own choreographic voices through contemporary dance movement flavored with elements of clowning and theater of the absurd to raise philosophical questions.

A U.S. premiere, the event was, in a sense, its own flash of intuition. In many ways, Atlanta is dominated by commerce, with that business ethos entering its performing arts scene. So the Windmill’s daring choice to present experimental dance theater work — original, fresh and performed at a high artistic level — made Slightly Off Stage an important step in the dance community’s progress.

Both dancers were shaped by classical training and have branched into contemporary styles — Griswold danced with Atlanta Ballet then in Germany with Ballett Augsburg and Nationaltheater Mannheim. Lucaciu danced with the Royal Danish Ballet, Ballett Augsburg and Cedar Lake Contemporary Ballet. She now lives in New York and assists in-demand Swedish choreographer Alexander Ekman. Lucaciu also works as a freelancer and has been investigating the use of clowning games and methods to generate expressive movement in her choreography.

Griswold aims to bring the dance theater form he got to know in Germany to Atlanta. It is a genre deeply influenced by Pina Bausch, her predecessors and many artists whose work is alive and celebrated in Europe. Atlanta has seen occasional works in the genre — some as part of the EXPOSED Israeli Dance Festival in 2016 as well as Core Dance’s American Playground and Fly on a Wall’s Byte that featured performer Noelle Kayser last fall.

Slightly Off Stage drew some of its inspiration from Samuel Beckett’s play Waiting for Godot. The work mirrored the ridiculousness of the play, and its characters’ situation — waiting for someone they’ve never seen and following orders from someone they don’t know, without knowing why or for how long. In last weekend’s work, Lucaciu’s and Griswold’s characters found themselves tasked with undoing one another’s actions, endlessly.

Griswold appeared on the opposite side of the stack. Framing the column of paper, they slowly glanced sideways at one another and then fixed their clothing as if preparing for competition. Ana Maria Lucaciu in Slightly Off Stage by Lucaciu and Nathan Griswold (Photo by T.M. Rives)

They could have been office workers — one tasked with adding papers to the stack, the other with removing them as they carried out orders from a disembodied voice that boomed from above. The stack could have represented any number of things — a bureaucratic system, memory, an endless to-do list or an ordered worldview waiting to be thrown into a state of chaos.

A task-based approach seemed to inform their movement choices. To “Casta Diva” from Bellini’s Norma, they folded in and out of one another, limbs crossing or aligning, then gliding off into the next fall, lift or revolution. They rose effortlessly, at one point, Griswold supporting Lucaciu as she unfurled, arms stretched toward either side, chest expanding and suspending on the singer’s high note.

Their relationship morphed with ambivalence, ambiguity. Were they coworkers, friends, competitors? Colleagues? Adversaries?

A voice barked commands from above, and the two obeyed, their frustration escalating.

Papers defined their world — a pillow for sleeping, a pivot point for turning. The dry, rhythmic sound of flipping pages evoked meaningless repetitive motion. At one point, Griswold poked Lucaciu in the chest as if trying to pick a fight. At another, Lucaciu gazed upward with sunken chest as if emotionally and physically overwhelmed. As the piece progressed, one wondered if they would join together in solidarity against the unseen power or if they would continue to carry out pointless tasks in perpetuity.

Once the situation pushed them to a breaking point, Griswold took Lucaciu’s feet and swung her like a cantilever, the impetus of the circle scattering papers around the space. Order became chaos in one liberating act of rebellion. Lucaciu crumpled a sheet of paper into a ball and raised it in her fist toward the ceiling in defiance. She threw armfuls of papers into the air and rolled around in them, euphoric, inundated, or perhaps driven mad.

She knocked the remaining stack over, and when the commanding voice responded with indifference, the question became “What now? What do we do?”

Whether or not the artists answered the questions they raised mattered little, so fine and subtle were their performances. Lucaciu’s movement had a flow and sweep, an emotional riskiness and commitment at each moment — melodious and luminous whether playful, aggressive or defensive. Griswold was equally present onstage, moving and responding with a crisp, clear intent, attention to detail and deft economy of means.

Reveling in the ridiculousness of an impossible situation, Slightly Off Stage opened the floor for a new round of questioning about life’s purpose and meaning — perhaps awakening its audience members to the absurdity of their own life situations.

Unquestionably, the work showed that by breaking convention through experimental dance theater work — performed by the best — Fly on a Wall and the Windmill Arts Center are establishing a vital presence on Atlanta’s performing arts scene.