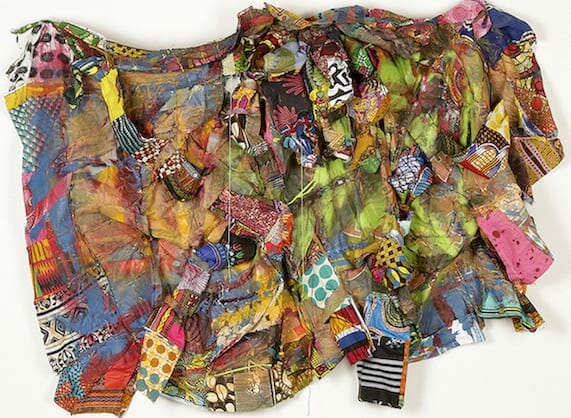 Jamele Wright Sr., one of five Artadia Atlanta finalists, uses found materials, Georgia red clay and Dutch Wax cloth to create conversations about the Black experience. This work is from "In Transit: The Return Home," seen in summer 2019.

Kennesaw State University will offer a graduate degree in art and design in the fall of 2021. The Master of Arts degree — KSU’s first and only first master’s program — was approved by the Board of Regents of the University System of Georgia last week.

The program will be housed in the College’s School of Art and Design and offer three tracks — digital animation, art education and museum studies for 15–20 students. The museum studies concentration is designed to prepare digital archivists, specialist curators, docents, educational staff, registrars and catalogers.

The national nonprofit Artadia has announced five finalists for its 2020 round of Atlanta awards. Each finalist will receive studio visits with second-round jurors who’ll decide where prizes of $10,000 go. The winners will be announced the first week of December. The Atlanta finalists are:

Artemus Jenkins, an award-winning filmmaker who uses the documentary format to  capture the raw and beautiful aspects of Black culture.

Grace Kisa & Maurice Evans, whose Nu Africans project turned controlling and long-accepted images of Black women upside down by depicting them as creator, warrior and queen. Zipporah Camille Thompson, a visual artist and sculptor who explores ritual and alchemical transformations through the unknown and through universals, including death, catastrophe, chaos and the cosmos.

Jamele Wright Sr., whose work deals with the Black American vernacular experience. He uses found materials, Georgia red clay and Dutch Wax cloth to create conversations between family, tradition, and the spiritual and material relationship between Africa and the American South.

The Brooklyn-based nonprofit supports artists with unrestricted, merit-based awards and a lifetime of program opportunities. It has awarded more than $5 million to more than 340 artists in Atlanta, Boston, Chicago, Houston, Los Angeles, New York and San Francisco since 1999.

THEATER: Out of Hand gets 2020 Tanne Foundation award

Out of Hand Theater has won a 2020 award from the Boston-based Tanne Foundation. The awards, totaling $81,000, are going to five individuals and three artist-run organizations.

Out of Hand is the only Georgia recipient. Other recipients are visual artists in Kentucky and Tennessee, a Maryland dancer, an actor–singer–poet–playwright in Alabama, an experimental visual art nonprofit in Boston and a a new-music nonprofit, also in Boston.

Out of Hand was founded in 2001 to create a new kind of theater with a mission to spark conversation and build a better world. The company works at the intersection of art, social justice and civic engagement using the tools of theater. It’s probably best known for its Shows in Homes series, which has addressed such issues as gun violence and mass incarceration, and Equitable Dinners: Lift Every Voice, a monthly, online conversation series on racial equity featuring art, experts and small breakout conversations.