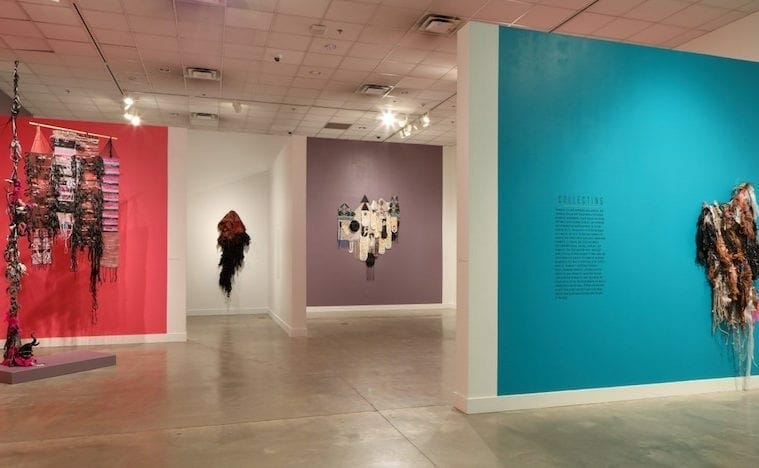 "Looming Chaos" by multidisciplinary Atlanta artist Zipporah Camille Thompson is on view through May 10 at the Zuckerman Museum of Art in Kennesaw. She uses textiles, audio, light and found objects in her abstractions.

This exhibition can be seen in a 360-degree virtual tour through July 26.

Zipporah Camille Thompson’s Looming Chaos associates the act of weaving with the notion of eternal return. The flux of nature inspires Thompson, who discusses interconnections between land, bodies and other natural phenomena in a short video accompanying her exhibition. Thompson’s practice extends beyond textiles: audio, light and found objects augment her abstractions. Sounds of the loom and the voice of poet rosa mendez bring warmth to the gallery, connecting the process of making to the finished works.

Looming Chaos is at the Zuckerman Museum of Art at Kennesaw State University opens with geodrifters (2016). Woven wall hangings made of handspun cord, raffia and rope hang at irregular intervals like miniature continents adrift against a fuchsia wall. They grow larger as they near the floor. Likewise, much of Thompson’s work is oriented downward. Soft forms droop in and over rods and wires; suspended objects hang from rods and cords. The most earthbound, azul electica (electric blue), a 2019 work, lays flat on the gallery floor (other installation photos show it lying on raw ground). Rubber mulch, repurposed denim, and other materials are piled and arranged in a rectangle accented by deer jaws, chicken bones and antlers. This combination of the natural and artificial appears throughout her work. Her mutant (2014) features a wasp nest below a sculptural tapestry. “azul electica (electric blue)” from 2019 lays flat on the gallery floor (photographed here on the ground). It contains rubber mulch, repurposed denim and other materials accented by deer jaws, chicken bones and antlers.

Curator TK Smith, an ArtsATL contributor and a Tina Dunkley Curatorial Fellow at the Zuckerman and Clark Atlanta University Museum, employs brightly colored walls — like the fuchsia for geodrifters — that order the work into loose sections. This draws attention to Thompson’s emphasis on color and texture. Interpretative text offers insight into key aspects of her practice: collecting, weaving and abstraction.

Smith’s texts refer to the oft-ignored act of making and give viewers insight into Thompson’s processes. Smith explains that collecting was originally associated with a feeling of security but later became associated with artistic transformation. In Thompson’s rich iconography, collected items “embody materialized chaos.” Steeped in a long history, weaving is both a rigorous craft and a means for Thompson to act expressively. Abstraction starts with her practice of using mood boards to translate her many inspirations — nature foremost among them — to non-objective, formal language.

The largest work in Looming Chaos is la eterna (the eternal). The 2020 piece is a symmetrical arrangement of ceramic, fiber and mixed-media objects hanging against a teal wall. Snakes, braided forms and celestial imagery appear throughout. Comb-like objects — a weaver’s comb, perhaps — suggest the loom. The inclusion of such objects points to the intertwining of artistic process and overarching theme of eternal return. “negro cielo (black sky)” is suspended from the ceiling.

A 2019 piece titled negro cielo (black sky) is suspended from the ceiling. It consists of tapestries and myriad other materials, including synthetic hair and ribbon. Thompson uses hair and personal objects throughout her work. For example, oshunmare: rainbow ritual (2018), named after a Yoruba spirit, includes roller clips and ribbon alongside wools, sequins and cowrie shells. Barrettes appear in the nostalgic Old Magic (2018), a small weaving that incorporates photographs and cassette tape as if to conjure the era of the artist’s childhood. The use of hair and hair accessories suggests the personal and further connects acts of grooming (like braiding or extensions) with the craft of weaving and acts of identity creation and transformation.

Subtle gestures loom large throughout Thompson’s work. She resists the conventions of framed 2D art or upright sculpture, opting instead for a multidisciplinary approach. Of course, this is common in textile work, yet Thompson elegantly emphasizes gravity’s effects and suggests an earthbound orientation throughout her soft, multimedia sculpture. It’s a subtle nod to both the decay and rejuvenation inherent to the theme of eternal return in Looming Chaos.