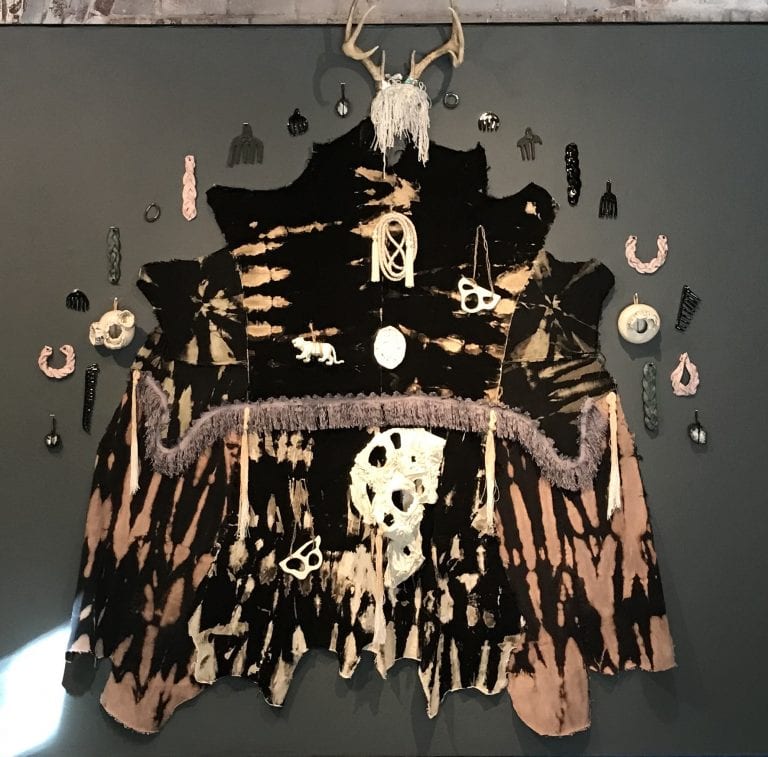 When Zipporah Camille Thompson last showed at Whitespace in 2016 with Dark of the Moon, her work evoked an air of mystery and the unknown. The use of soft textiles contrasting against black paint evoked a sense of darkness, as if mirroring the undiscovered, dark corners of the universe.

With her new show, Black Cloud Prism at Whitespace through October 20, the darkness has started to dissipate. Thompson’s work seems to have undergone a metamorphosis as she merges her customary techniques into more cohesive pieces, balancing the former use of objects and textiles with new, lighter hues and photographs. Thompson once again explores the cosmos and its chaotic magic, not just from the vantage point of darkness, but from the multiple perspectives suggested by the symbolic, resonant use of the forms of clouds and prisms.

In Space Bun Dream, she interweaves cotton and yarn to give the materials a hair-like texture, and she curiously adds gold bear barrettes to the piece, giving it an innocent, childlike feeling. The many issues and cultural flash points surrounding hair seem to swirl across several pieces here like Sky Contemplation and Summoning the Storm. In the latter, she anchors her memories with mundane objects that give a peek into her personal cosmos.

Thompson’s recent trip to Oaxaca, Mexico, seemingly influenced the ceramic and woven elements used in several of her Black Cloud Prism pieces. Polaroid photographs from her time there, showing landscapes, doors and various textures, reveal her new interest in exploring the territory. Thompson says that she’s still figuring out how these Mexican influences will fit into her overall work, but she’s continuing to investigate the vibrancy of the culture.

Her exhibition bleeds over from the main space into the smaller space Whitespec, almost as a call to her previous work. The most captivating piece here is The Mothership. The mixed-media installation, which takes over a large portion of the room, suggests alien life forms, combining all of Thompson’s usual materials plus a few new ones, such as small ceramics, an abundance of glitter paper, confetti and pink flags.

A step back reveals two pieces facing each other: OVA: Lighting Litany and Olokun Prism Portal. Both have hairlike components, one blonde and straight and the other dark and curly, suggesting the intersectionality of histories, magic and memories that molded Thompson as she grew up.

Like Thompson, Mary Stuart Hall explores moments of change, but by looking to the past, by recollecting and by rebuilding the walls of her childhood home. Tucked away behind the gallery, Shedspace, a small shed that functions as a “creative incubator” at the gallery, gives Hall’s memories an evocative setting. Decorated with string lights, Drawn from Memory recreates Hall’s now demolished childhood home — a two-story suburban house with a carport — in three dimensions. The model, though primarily transparent, has a hazy aspect, suggesting the imprecise process of recalling fading memories from days past.

The house’s windows are covered with excerpts from Gaston Bachelard’s The Poetics of Space, a text that uses architecture as a metaphor for the way experiences are carved into us in childhood. The words, which can become indecipherable or invisible depending on where you stand, evoke both a sense of nostalgia and unreality: dreams, blurriness, imagination, shadows, recollections. Although our lives are lived chronologically, looking back isn’t ever linear. This beautiful sense of the fleetingness of memory is hauntingly captured in the work.