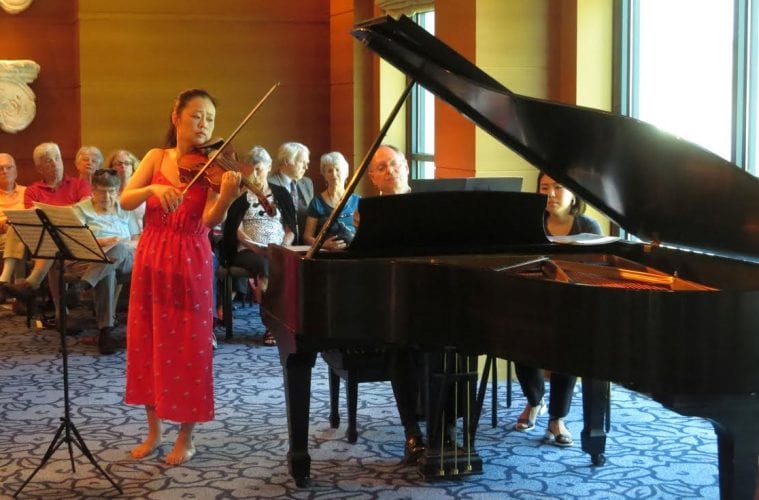 The Emory Chamber Music Society of Atlanta kicked off its 2018–19 season on Friday with a noontime recital by violist Yinzi Kong and pianist William Ransom at the Michael C. Carlos Museum. Kong and Ransom have been making music together for almost 20 years, a professional relationship that ultimately developed into a romantic one: they were married June 18 at Emory University’s Alumni House.

“I thought this would be a perfect way to open the society’s 26th season, with a celebration of sharing love and joy, which is what I try to bring to all my music making and presenting,” says Ransom, who is also artistic director of the series. “The Carlos concerts in particular, with the small venue, feel like ‘family’ to me, with so many familiar faces at the concerts, so sharing this program there seemed appropriate — rather than in Emerson Hall, a little bigger and less personal.”

As someone who never misses an opportunity to raise funds, Ransom also invited the audience to make a donation to the Chamber Music Society as a kind of “wedding present” for the couple.

In line with the idea that “first comes love, then comes marriage,” Kong and Ransom opened the short but richly romantic program with Max Bruch’s 10-minute Romanze in F major, Op. 85, followed by César Franck’s great Sonata in A major, which made for the balance of the program.

Best known for his violin concertos, Bruch’s Romanze dates from 1911 when he was 73 years old but with his creative powers still in full force. Originally for viola and orchestra, Bruch himself arranged it for viola and piano. The work’s passionate lyricism and drama were brought out fully in Kong’s deep-hued, assertive viola playing, underpinned by Ransom’s affirmative, collaborative keyboard work.

Franck’s Sonata was originally written for violin and piano, as a wedding present for the 31-year-old violinist Eugène Ysaÿe — thus an easy fit for the theme for Friday’s recital. The only transcription authorized by the composer himself was one for cello and piano, by renowned cellist Jules Delsart, although a number of versions for other instruments are commonly heard these days. The particular arrangement for viola and piano heard on Friday was created by Joseph Vieland, a violist for the New York Philharmonic during the mid-20th century.

The viola part is essentially the same as the violin part of the original, except for a few octave changes where the viola needs to be in a lower octave. “The sound is naturally deeper and a little smokier, but the musical sentiment is the same,” says Ransom.

That smoky, woody character of this transcription had emotional muscle throughout this performance of the Sonata’s four movements, both in the smoldering viola part and the substantial, challenging piano part. The cyclical nature of the piece, where themes from one movement reappear transformed in subsequent movements, also lent itself to the performers sustaining a communicative tensile strength and liveliness for the duration.

As is common with other noon performances — the Chamber Music Society mounts in the Carlos Museum’s upstairs Ackerman Hall — this performance by Kong and Ransom drew a capacity crowd. Because it is a lunchtime performance, the audiences lean toward the upper end of the age spectrum, as these concerts are a big opportunity for seniors from nearby retirement homes to be bused in for events. They prove an enthusiastic and supportive core crowd for the series, but it is also an opportunity for members of the Emory campus community to take in a concert during lunch hour, or for those with alternative work schedules who can’t make evening concerts to bask in some high-quality live classical chamber music that also features free admission. For all those reasons, these noon concerts at Carlos tend to be crowded but well worth the effort to get there early for a choice seat.