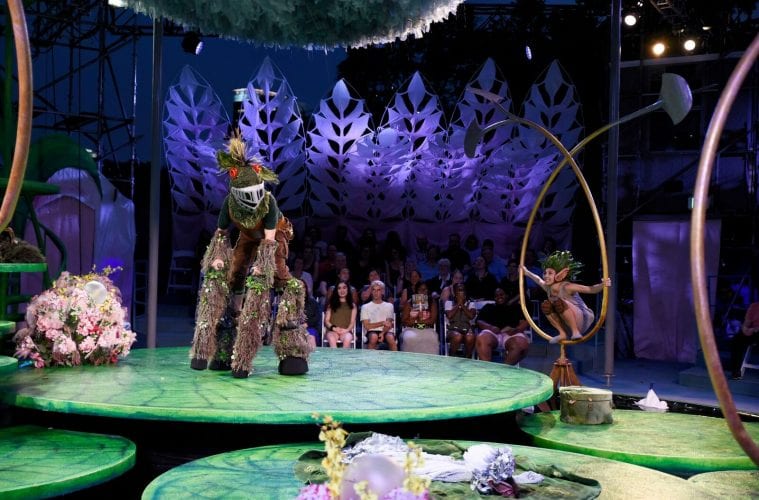 An unspoken but persistent popular notion has it that a theater critic’s job is to spoil everyone else’s good time. In the instance of the Alliance Theatre’s charming, crowd-pleasing new production of A Midsummer Night’s Dream, running at the Atlanta Botanical Garden through October 21, I simply can’t oblige.

There’s certainly enough here to piss off any theater critic worth his salt. Shakespeare’s great play has been abridged and blenderized, major scenes and subplots have been cut out or moved around, a new framing device (with new characters with cutesy gardening puns for names, no less) has been added in. Shakespeare wrote lyrics to songs for A Midsummer Night’s Dream, and some of the world’s greatest composers have taken a stab at setting them to music, but these have all been discarded in favor of new pop tunes with contemporary lyrics that often have only a tenuous relationship to the plot. A scathing review nearly writes itself.

But thanks to many things — the placement in the Botanical Garden; the fun, intimate and inventive set; some simple but magical staging effects and a fantastic cast — this is a show that’s hard not to like. On opening night, I laughed as hard as anyone who wasn’t there on the clock, if not harder. I can’t take the audience to task for enjoying themselves, because, well, I enjoyed myself. Devon Hales and Adeoye in A Midsummer Night’s Dream.

In director David Catlin’s adaptation, a group of gardeners who work at the Botanical Garden are preparing for a wedding reception. One of them, Petunia Prune (Courtney Patterson), who has a thing for the the bossy Brick A. Bottomside (Joe Knezevich), convinces the gang that they should rehearse a performance of the great love story Midsummer Night’s Dream and present the show in honor of the upcoming nuptials. Her fellow gardeners are hard to convince at first. But they slowly begin to ease into their roles, and as the rehearsal gets underway, the story of Midsummer Night’s Dream, or at least an abbreviated version of it, takes off.

Actors take on multiple roles, often in inventive ways. Patterson, who as Petunia orchestrates much of the action, also plays the central orchestrating role of Puck. She’s a delight to watch on stage throughout: she has a sort of innocent, forbearing conviction to seeing things through even as they get muddled, an attitude that’s legible in her face from moment to moment whenever things go awry. Hers is physical comedy that brings to mind great female comedians like Carol Burnett or Lucille Ball. The cast is likewise fun to watch as they climb around Kat Conley’s deliciously colorful set with its giant lilypads floating over a pond.

The songs by Rick Sims may not belong to Shakespeare, but they’re actually pleasant pop-rock tunes that sound great sung by this cast. (But just to prove I haven’t been entirely slacking off in my duties, I will point out that I did roll my eyes and suppress a mighty snort at the execrable lyric sung as part of the culminating ensemble love song: “Resolve into a dew… I do!” I shuddered for the sake of all my kind.)

The critic in me also couldn’t help but wish for a straightforward production of the full work incorporating the same great cast and the same beautifully inventive staging elements. There’s an energetic approach to Shakespeare here — a thorough consideration of the dramatic and comic potential of each moment coupled with a full summoning of all the capabilities of elaborate production elements — that’s far too seldom seen in Atlanta. Full productions of Shakespeare’s work in this style can and should be brought to Atlanta stages as occasional additions to the seasons of major theater companies in town. The production reveals a gaping hole in the city as much as it fills it.

Still, even though in this fleet 90-minute adaptation “midsummer’s lease” has all too short a date, I think most Atlantans will fall deeply under the production’s charming spell. And for any who don’t: I happen to know a line of work you may be perfectly suited for.