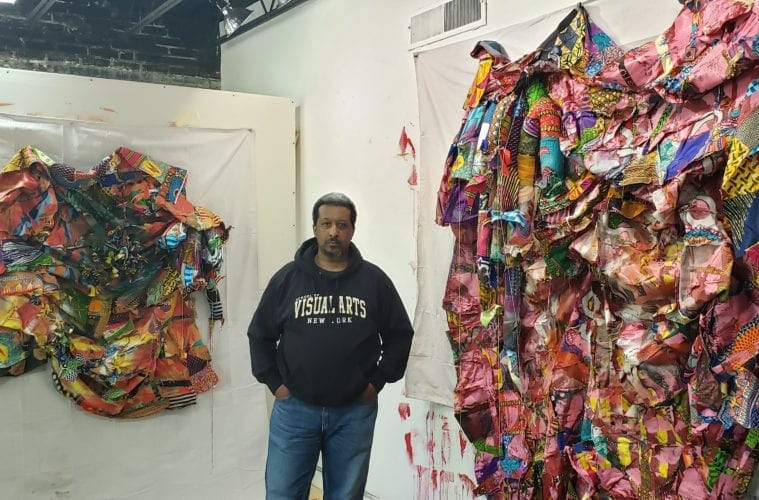 Atlanta artist Jamele Wright Sr. in his West End studio. "I purposely try to create something so ugly that when you see it, it’s beautiful," he says. (Photo by TK Smith)

Jamele Wright Sr. is a son of America’s Great Migration in the 20th century, coming of age in both the South and the North. In Atlanta, where he settled, he’s made a name for himself as a gallery owner, art historian and artist. His work is abstract and deals with the black American vernacular. He collects found materials, Georgia red clay and Dutch wax cloth and creates conversations between family, tradition, and the spiritual relationship between Africa and the South.

Wright, 48, has a B.A. in art history from Georgia State University and recently earned his M.F.A. from Manhattan’s School of Visual Arts. He invited ARTS ATL contributor TK Smith to his new West End studio to talk about In Transit: The Return Home, his one-man show opening June 6 at September Gray Fine Art Gallery in Buckhead. It runs through September 13. The work in progress (Photo by TK Smith)

ARTS ATL: What can you tell us about your show?

Jamele Wright Sr.: It’s an extension of the In Transit series. I don’t name my work, each individual piece. I name my body of work and then just go by numbers. The idea of transit is based on the 1920s to the 1960s, when African Americans moved from the South to the North in hopes of finding new opportunity. My mother moved from Alabama to Columbus, Ohio, when she was 14, and I was born in Columbus. I spent my summers in the South — my summers, my springs, my Christmases sometimes in the South. When I talk about where the art comes from, a lot of it comes from my visits to the South because of the open space. The artist’s works often begin with fabric scraps he gets from a woman who makes African clothes. (Photo by TK Smith)

Wright: Abstraction is moving, and that’s what I’m accomplishing in these pieces. There’s a certain level of movement, a certain level of progression. I believe that abstraction is the way of communicating in this time. I think telling the story of figurative painting for African Americans is not just a trend, but there’s something else I need to say, and the figure doesn’t say it for me. Abstraction is where beauty really meets conflict. I purposely try to create something so ugly that when you see it, it’s beautiful. Where did the works come from? They come from scraps.

Wright: I like the idea of finding something on the street and making it into something new. I like the idea of taking something that you believe is one thing and me making it what I want it to be. If I separate the items into their shapes, they become something else, and that’s the beginning of who I am. The same thing with found materials. It’s finding value in things that most people throw away, and it has a recycling aspect. I like [viewers] looking at my piece and going, “That’s a ball,” and me going, “No, that’s blue. It’s not a ball, it’s flat, and it’s just a color.” I value the thing rather than its intent. In my work, I see the black body in the same way. There is this idea that it’s supposed to be one thing, but I see it as a different thing. My body isn’t for killing. My body isn’t for working. My body is for art. A work from In Transit: The Return Home at September Gray Fine Art Gallery in Buckhead (Courtesy of the gallery)

Wright: It begins with the Luba Nikisi pieces in the Congo. I believe in power items. I believe in creating something that gives power to people. There’s a woman I know who makes African clothes. I started asking for scraps. I’d sew those pieces together, along with other pieces that I found. I put them on the wall, I tape it down, and I paint a pattern on top. The fabric is imbued with history already. It’s a Dutch fabric first given to the Malaysians. The Dutch took it to Africa, and Africans accepted it. They began to use the colors for ceremonies, different colors go with different ceremonies, different fabrics have different names and mean different things. I paint on top of them. So, here you have what is considered an African fabric, with an African name and history, and I put my history on top of it. I do that with spray paint. Spray paint is the lineage of hip-hop and bombing.

The pouches are from the idea of gris-gris bags. The gris-gris bags started off in Africa, where Muslims would attach them to their necks with scriptures inside. Further into Africa, you start seeing them with cockerel shells. They change again in the American South. We know them as gris-gris bags or Johnny [Conqueroo]. They take a small little bag with a rabbit’s foot or a feather and put it in their pocket for good luck. It’s a power item. I made large gris-gris bags and put them on the work. I put my clothes in there, clothes that I’ve worn, clothes that my children have worn, clothes that my parents have worn. All this stuff has good energy. I don’t pray over them, but they’re in this space where I drink Jack Daniel’s or smoke a cigar, play Prince all day long, or I use frankincense. That is good energy, clean good energy. When you have it in your home, it has a power to it.

ARTS ATL: What do you do when the process isn’t working?

Wright: Thornton Dial is my favorite artist. I can look at Picasso’s sculptures, Martin Puryear, Brancusi, but when it comes to being able to tell a complete story, I really don’t think it gets better than Dial. Sometimes I don’t even need the titles; I know what he’s talking about. I know what tools he’s using. They were in my house or in my neighborhood. Dial is generally the person I go to when I can’t figure out what my work is not doing. Going to the High [Museum of Art] and taking 15 or 20 minutes to stare at a Dial piece and watching the way he handled the material, oftentimes the answers just show up. I figure it out.