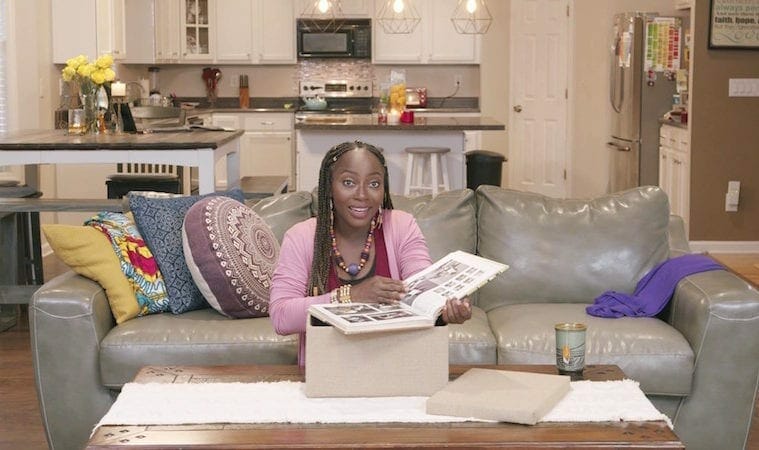 Review: “Neat,” streaming online via Actor’s Express, reminds us to hold onto wonder

Every summer as a child, Charlayne Woodard traveled with her mother and sister from New York to Garden City, Georgia, to see her mother’s family. The highlight was always playing outside with her mother’s youngest sister, Aunt Neat. She always saw Neat, who suffered brain damage as a baby, as more of a peer. In her one-woman show, Woodard tells her coming-of-age story, and Neat’s, with gut-wrenching honesty.

The drama is performed not onstage, but in the kitchen and living room of a modern home. Jordan is dressed comfortably in pink and purple yoga clothes, and sips tea. As she flips through the family photo album, black–and-white images appear on-screen to aid with transitions.

Jordan’s acting is theatrical but with no black box or proscenium. She looks at the camera as if the audience is sitting across from her. She also does a nice job of giving the many characters she portrays distinct voices — these are the people who shaped Woodard’s life, including her pipe-smoking great-grandmother, her stern father and a police officer who throws her in a paddy wagon for protesting and, of course, Neat.

Jordan gives each one a specific gait and plays with movement. Charlayne’s slick-as–oil first boyfriend, for example, walks with a deep lean and limp. Even with few descriptors in the script, Jordan makes Charlayne’s friends and family feel like people we all know.

When Woodard visited the South, one of her favorite things to do with Aunt Neat was pretend to fly. Neat always spoke of flying as if she knew that there the was something more for her than what her small, segregated Southern town offered. Even when Neat and Woodard’s grandmother came north to live with them, Neat’s adventurous spirit thrived.

That’s the show’s lesson. Neat lived with Woodard in her adolescence — when life has teased and tortured most people’s imaginations out of them. Neat never lost her sense of wonder, which makes the piece’s ending more sweet than bitter.