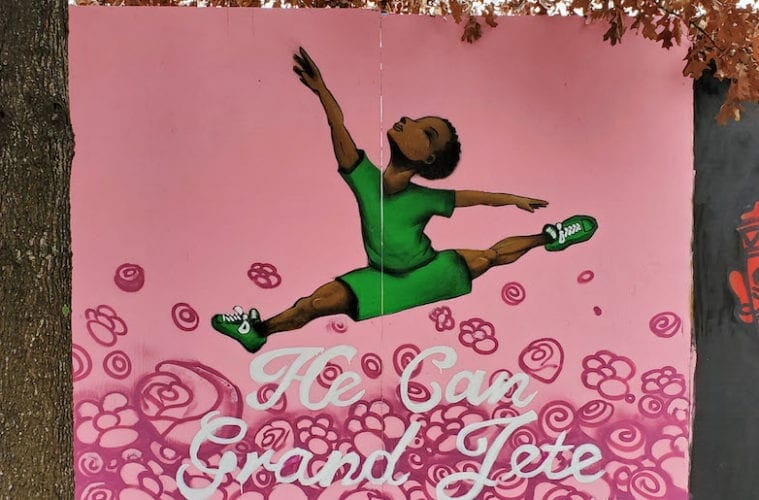 "A Reflection of Change," 10 new murals on the Atlanta BeltLine's Eastside Trail, includes "He Can Grand Jeté" by EricNine.

Today in street art: Back to the BeltLine with new project “A Reflection of Change” Most of the work was inspired by Black Lives Matter messages, says Brooks, who in 2019 became the BeltLine’s first curator-in-residence. She was the driving force behind the large-scale public-art installation Journey of a Black Girl, which had both in-person and virtual elements on the Southside Trail last summer. With A Reflection of Change, she says, the artists wanted the murals to inspire and uplift whoever walks by.

The irony of the title isn’t lost on legacy residents of the historically Black — and now gentrified — Old Fourth Ward. So the shallow horizontal murals seek to amplify Black voices. The Reflection of Change installation, 10 murals in all, covers the plywood façade of New City Properties’ Fourth Ward construction project, a 12-acre mixed-use development that will include 1 million square feet of office space, 200,000 square feet of retail space, a boutique hotel and more than 1,000 residences.

The Old Fourth Ward is no stranger to development, being home to such mixed-use projects as Ponce City Market and, more recently, 725 Ponce (housing the BeltLine Kroger once known ignominiously as the Murder Kroger). The Fourth Ward construction façade went up last summer and, during a wave of Black Lives Matter protests, neighbors used the boards to support the movement. “So honored that our neighbors are using it this way, #blacklivesmatter,” New City Properties said in an Instagram post then.

Development in the Historic Old Fourth Ward and BeltLine neighborhoods has long stoked concerns over issues of encroachment and gentrification. “The company has a specific concentration on the preservation of structures with historic character,” New City says in its mission statement, “and exploring ways to repurpose them for modern use.” Most of its projects are in the Old Fourth Ward. Its seven-member team includes one person of color.

THE ARTISTS + THEIR MURALS:

Brooks was born in Denver and has lived in Atlanta for nearly two decades. She’s curated more than 20 solo and group shows in metro Atlanta. With A Reflection of Change, she says she wanted to amplify Black voices in a way that pays homage to what’s already in the neighborhood and couple that with an uplifting, joyful message. Joining her on the project were artists Erica Chisolm, Ruby Chavez, M. Key, Jiggy Korean, EricNine and Lord Yatta.

Be the Change, Ruby Chavez’s mural, puts two young Black boys atop a Confederate monument that once held Robert E. Lee. She’s known to modernize history in her paintings, including one inspired by Norman Rockwell’s 1964 The Problem We All Live With. She puts Vice President Kamala Harris in the scene alongside 6-year-old Ruby Bridges, who helped desegregate New Orleans’ schools.

Detail: “Be the Change” by Ruby Chavez.

GRACE, M. Key’s mural, is a collection of “blind-contour”-style portraits against a backdrop of bright geometric shapes. It’s intended, she says, “to honor all the women who face extraordinary challenges with exceptional dignity and grace.”

EricNine reimagines his familiar ballerinas for four murals. They take the shape of boys and girls with messages of nonconformity, including: She Can Be the Hero, She Can Run the World, He Can Grand Jeté and He Can Cry as encouragement for young passersby.

Inspire Change, the mural from Lord Yatta, better known as a tattoo artist, represents the innocence and curious nature of children and their potential as instruments of change. WHERE TO FIND IT:

A Reflection of Change is viewable throughout the construction process. Access it on the Eastside Trail via Old Fourth Ward Park, the BeltLine Kroger or Ponce City Market. New City plans to move the murals to a permanent spot once the build-out is done. Stay tuned.